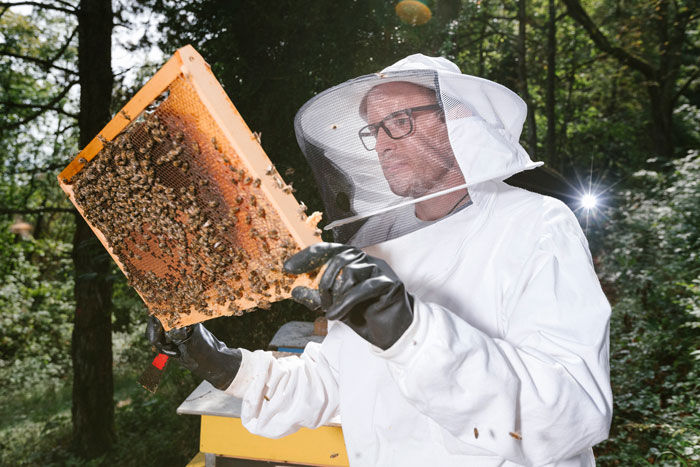 Neonics, a class of chemical pesticides toxic to bees, have been found to contaminate 75 per cent of the world’s honey.

This is the result of research conducted by a team at the University of Neuchâtel and the Botanical Garden of Neuchâtel, Switzerland, published yesterday in the journal Science.

It reveals the extent of inadvertent damage farmers around the globe could be doing to the bee population, especially in North America, Asia and Europe where the highest concentrations of the chemical were found.

Though the chemicals can be toxic to humans, the measured concentrations of neonics are below the maximum authorised levels for human consumption.

“Based on this latest science, the large majority of studied samples do not represent any health risk for consumers,” said the study’s lead author, Edward Mitchell, Professor and Head of the Laboratory of Soil Biodiversity at the University of Neuchâtel (currently on sabbatical at Landcare Research in Lincoln, New Zealand).

The situation is, however, more critical for bees.

“Throughout the world, bees are exposed to concentrations of neonics that have demonstrated effects on bees’ behaviour, physiology and reproductive abilities,” said Alexandre Aebi, Lecturer in Agroecology at the University of Neuchâtel and beekeeper.

Neonics account for one third of the global pesticide market. They are used to protect major crops such as corn and soy from pest insects. They attack the central nervous system of invertebrate pests, causing paralysis and death. Because neonics are found throughout the plant, including the pollen and nectar, bees are contaminated when they forage – resulting in contaminated honey.

Conducted in 2015 and 2016, the study analysed 198 honey samples from around the world, looking for the five most commonly used neonics: acetamiprid, clothianidin, imidacloprid, thiacloprid and thiamethoxam.

Seventy-five per cent of the honey samples contained at least one of the five tested substances. The proportions varied considerably among regions, with the highest levels in North America (86 per cent), Asia (80 per cent) and Europe (79 per cent), and the lowest in South America (57 per cent). Oceania, New Zealand and the Pacific Islands were slightly below average (71 per cent).

“We are able to quantify these molecules with excellent precision, at concentrations of one per 10 billion (0.1 ppb) or less,” said Gaétan Glauser, the head of the analytical platform.

Thirty per cent of all samples contained a single neonicotinoid, 45 per cent contained between two and five, and 10 per cent contained four or five. Measured concentrations were below the maximum residue level authorised for human consumption for all compounds and samples, but total concentration exceeded this limit for two samples containing five neonicotinoids. It remains to be determined how contamination by multiple substances (the “cocktail effect”) may affect bees, humans or other organisms.

The researchers used a worldwide collection of honey obtained through a citizen science effort led by the botanical garden of Neuchâtel.

“The samples were randomly provided by more than 100 donors,” said Blaise Mulhauser, Director of the Botanical Garden. “We selected priority honeys from small and local producers, in order to obtain a balanced geographical representation.”

Responding to new research, Friends of the Earth nature campaigner Sandra Bell said: “The discovery of bee-harming pesticides in honey samples across Europe reinforces the need for a complete and permanent ban on these chemicals.

“Honey is a vital source of food to bees, not just a sweet treat for humans, so finding that so many of the honey samples contained a cocktail of these pesticides is a real concern – especially as scientists warn that exposure to a mixture of chemicals can be more harmful.

“This study adds to growing evidence of how much these pesticides contaminate the environment. Nothing short of a full ban will protect our bees.

“Michael Gove must back proposals for restrictions on neonicotinoids to be extended to all crops – and pledge to keep the UK free from these chemicals post-Brexit.”

The research was made possible by the Neuchâtel Platform of Analytical Chemistry (NPAC) at the University of Neuchâtel, where the analytical tools detect trace concentrations of neonics in complex matrices, such as honey.

Prof. Mitchell is also a member of the international Task Force on Systemic Pesticides, which released the second instalment of its Worldwide Integrated Assessment of the Effects of Systemic Pesticides on Biodiversity and Ecosystems in Ottawa, Canada, last week. The peer-reviewed study will be published in an upcoming edition of Environmental Science and Pollution Research.

The Princes rebrand: two years on