Beyond Meat Jerky is the first product to launch from the Plant Partnership between Beyond Meat and PepsiCo, and will hit stores in March 2022. 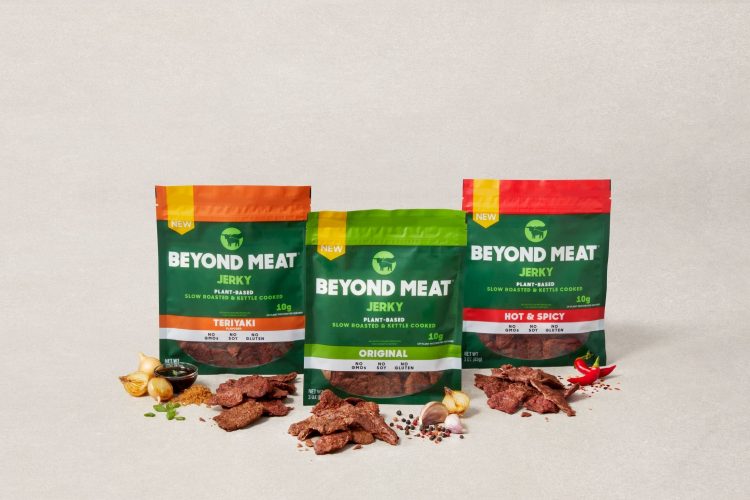 Beyond Meat and PepsiCo have announced the very first product to emerge from their joint-venture, Planet Partnership. Beyond Meat Jerky will be rolled out in stores across the US starting in March, and offers “a full-flavored, on-the-go snack experience that furthers Beyond Meat and PepsiCo’s shared passion for creating products that are better for both people and the planet.”

The two manufacturers say Beyond Meat Jerky is marinated and slow roasted to offer the savory experience of traditional beef jerky in three flavors: Original, Hot & Spicy and Teriyaki. Beyond Meat Jerky contains 10g of protein per serving, no cholesterol, and is made with plant-based ingredients such as peas and mung beans, all without GMOs, soy or gluten, PepsiCo and Beyond Meat claim.

Available in three different sized packs, Beyond Meat Jerky is Beyond Meat’s first shelf-stable product, which the plant-based specialist hopes will enable it to venture into new channels of distribution such as grocery stores, gas stations, club stores and pharmacies.

“The nationwide launch of Beyond Meat Jerky will make plant-based meat accessible to millions of households. It tastes great, it’s a good source of protein, and it’s convenient to eat whether you’re on the go, at the office or out on adventures.”

Founded in 2021, Planet Partnership is a joint venture between plant-based manufacturer Beyond Meat, who has partnered with major fast food brands such as McDonald’s and Yum! Brands, and food and beverage manufacturing giant PepsiCo.

The two firms claim the launch of Beyond Meat Jerky “signals the first of many plant-based protein innovations—from snacks to beverages—that can contribute to building a more sustainable food system while positively impacting human health and the planet.”