A new edible, biodegradable and anti-microbial material has been created in Brazil in the hopes of stopping the spread of single-use plastic waste. 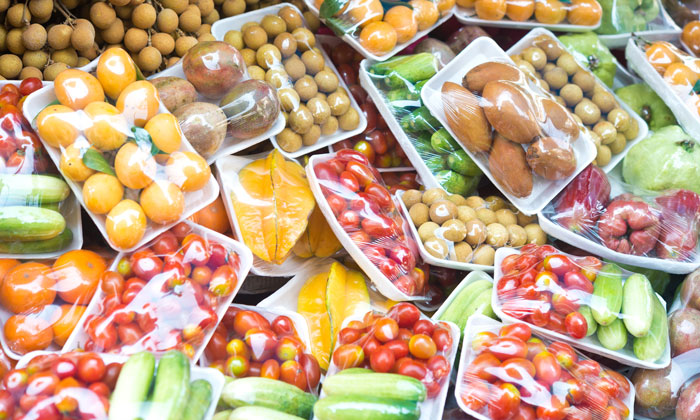 Growing concern over plastic waste has motivated research into the development of more eco-friendly packaging, including a new edible, biodegradable and anti-microbial plastic.

The disposal of food packaging is a major cause of environmental pollution worldwide. More than 350 million metric tons of plastic are produced every year, with 85 percent of the rubbish dumped into our oceans being plastic. Moreover, most plastic packaging is derived from non-renewable sources such as petroleum.

We all know plastic is bad for the environment and for animal life, but why is it still used?

According to the British Plastics Federation, plastic is used to protect vulnerable foods from damage whilst in transit and from contamination. It also preserves products for longer, which reduces waste by giving people more time to use or consume them before it is no longer suitable to do so. And plastic stops spillages and saves space.

Reducing the use of fossil fuels to produce plastic is the target of a great deal of research around the world. Many scientists are working on the development of biodegradable packaging materials that also prevent contamination by microorganisms and extend shelf life to prevent food waste.

A research team from São Paulo State University (UNESP) has now produced a bioplastic – or ‘green plastic’ – from type B bovine gelatine, which will make the new plastic edible and eco-friendly.

“Gelatine was one of the first materials used in the production of biopolymers. It’s still widely used owing to its abundance, low cost and excellent film-forming properties,” said Márcia Regina de Moura Aouada, co-author of the study published in Polymers.

The group added nanoclay to the mixture to make the film more consistent. This also increased its tensile strength to almost double a conventional polyethylene packaging’s tensile strength, the researchers stated.

A nanoemulsion made from black pepper essential oil was also added to the mixture to give the packaging a more attractive flavour and odour. In addition to this, the ingredients used are said to extend the shelf life of food products packaged within the material.

“If this kind of packaging becomes widespread in the marketplace, it could significantly reduce the use of plastic made from non-biodegradable polymers and hence the amount of solid waste,” Moura Aouada said. “In addition, the bioplastic will better protect packaged food against contamination by pathogens and help reduce losses.”

The group has also produced other eco-friendly materials to reduce plastic waste, including wound dressings from bacterial cellulose, and edible packaging made from kale purée, cocoa purée, and more.

“Our proposals are aligned with the Sustainable Development Goals [SDGs] adopted by the United Nations to end poverty, foster the planet’s economic sustainability, and ensure that the entire world population can enjoy peace and prosperity,” Moura Aouada concluded.