Study urges farmers and consumers to consider alternatives to soya

The study authors stressed that using soya for livestock feed and dairy-alternative beverages is more damaging to the environment than traditional grass-fed cows and milk beverages. 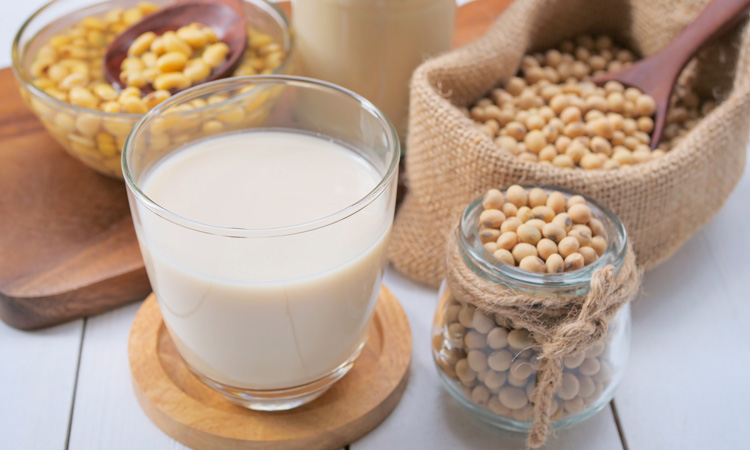 UK livestock farmers could use more local alternatives to soya meal and palm kernel meal without reducing productivity, according to the findings of a new study from the Sustainable Food Trust (SFT) and the University of Nottingham.

This is said to be essential to reduce increasing demand and associated destruction of rainforest in the Amazon and South-East Asia. But it is not just up to farmers, the researchers said, suggesting that vegans and others who buy milk substitutes made from soya also have a part to play. According to the researchers, switching to milk from grass-grazed cows would be more sustainable.

Global production of soya bean and palm oils has doubled over the last 20 years and consumption is still rising. Together, the two oils account for 90 percent of global vegetable oil production and are used in processed foods, animal feed and non-food products (including paint, ink and cosmetics).

Livestock feed manufacturers favour the use of soya bean meal over other high-protein feeds, with over a million tonnes used in UK livestock feed annually, the study noted. Widespread availability, high level and high quality of protein make soya bean meal attractive for use in pig, poultry and dairy cow rations, the researchers said. Palm kernel meal is predominantly used in dairy cow rations, especially as a supplement to grazed pastures. This practice should, however, be reconsidered, they added, explaining that grass has a relatively high protein content and adding palm kernel meal to the diet results in excessive nitrogen excretion and pollution of both air and water.

The authors calculated that about 85 litres of milk is produced in the UK for every kilo of soya bean meal consumed by dairy cows. In contrast, no more than 7.5 litres of soya drink are produced from a kilo of whole soya beans. As a result, the study found that drinking milk from cows in the UK uses 11 times less soya than consuming drinks made directly from soya.

Use of soya could still be cut further, the researchers said, if farmers used more alternative sources of protein and consumers actively sought milk produced from cows that graze grass.

Alternative protein sources for use in livestock nutrition noted in the study included:

Trials at the University of Nottingham reportedly demonstrated that these alternatives can be used successfully and can even increase productivity in dairy cattle and pigs.

SFT chief executive, Patrick Holden, said, “This is an important study. It shows that livestock farmers could reduce their dependence on imported protein, which is produced at such a high environmental cost, and rely more on home produced feed. But it also shows that drinking cows’ milk uses far less soya than drinks made from soya, because most of the milk comes from grass. This highlights the importance of grass, a crop ideally suited to our climate and the grazing animals that turn it into high quality foods we can eat”.