Researchers from USDA’s ARS have been investigating methods to combine chocolate with peanut skins, coffee grounds, discarded tea leaves and other food scraps as a way to boost milk chocolate’s health properties. 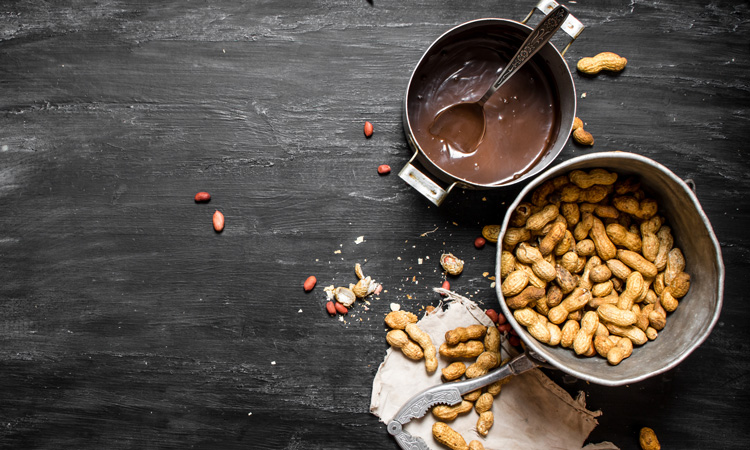 Researchers have reported a new way to combine milk chocolate with waste peanut skins and other wastes to boost its antioxidant properties, creating a “better chocolate”.

“The idea for this project began with testing different types of agricultural waste for bioactivity, particularly peanut skins,” said Lisa Dean, Ph.D., the project’s principal investigator. “Our initial goal was to extract phenolics from the skins and find a way to mix them with food.”

When manufacturers roast and process peanuts to make peanut butter, sweets and other products, they usually discard the papery red skins that encase the legume inside its shell, the researchers explained. This results in thousands of tonnes of peanut skins being thrown away each year, but since they contain 15 percent phenolic compounds by weight, they’re a potential “goldmine of antioxidant bioactivity”, the researchers said. Antioxidants provide anti-inflammatory health benefits and are known to help keep food products from spoiling.

“Phenolics are very bitter, so we had to find some way to mitigate that sensation,” Dean said. In fact, the natural presence of phenolic compounds is what gives dark chocolate its bitterness, along with less fat and sugar compared to its cousin milk chocolate, she continued. Dark varieties are also usually more expensive than milk ones because of their higher cocoa content, so the addition of a waste like peanut skins aims to provide similar benefits for a fraction of the price.

The researchers are also exploring the extraction and incorporation of phenolic compounds from used coffee grounds, discarded tea leaves and other food scraps.

To create their antioxidant-boosted milk chocolate, Dean and her team of researchers at the US Department of Agriculture’s (USDA’s) Agricultural Research Service worked with peanut companies to obtain the peanut skins. From there, they ground the skins into a powder, and extracted the phenolic compounds with 70 percent ethanol.

They also worked with local coffee roasters and tea producers to obtain used coffee grounds and tea leaves, using a similar methodology to extract the antioxidants from those materials. The phenolic powder is then combined with maltodextrin, a common food additive, to make it easier to incorporate into the final milk chocolate product.

To make sure their new confection would pass gastronomic muster, the researchers created individual squares of chocolate with concentrations of phenolics ranging from 0.1 to 8.1 percent and had a trained sensory panel taste each one. The goal was to have the phenolic powder be undetectable in the flavour of the milk chocolate. The taste-testers found that concentrations over 0.9 percent were detectable, but incorporating the phenolics at 0.8 percent resulted in a “good compromise” of a high level of bioactivity without sacrificing flavour or texture.

More than half of the taste testers preferred the 0.8 percent phenolic milk chocolate over the undosed control milk chocolate. This sample had higher chemical antioxidant activity than most dark chocolates.

Dean and team also acknowledged that peanuts are a major food allergy concern. They tested the phenolic powder made from the skins for presence of allergens, and while none were detected, they said that a product containing peanut skins should still be labelled as containing peanuts.

Next, the researchers plan to further explore the use of peanut skins, coffee grounds and other waste products into additional foods. In particular, Dean is hoping to test whether the antioxidants in peanut skins extend the shelf life of nut butters, which can go rancid quickly because of their high fat content. They hope that their efforts will eventually lead to a better milk chocolate on supermarket shelves.