The food scientists used turkey breast meat as a protein model to investigate whether limiting the sodium diffusion rates could reduce overall sodium while maintaining a quality of saltiness that consumers accept. 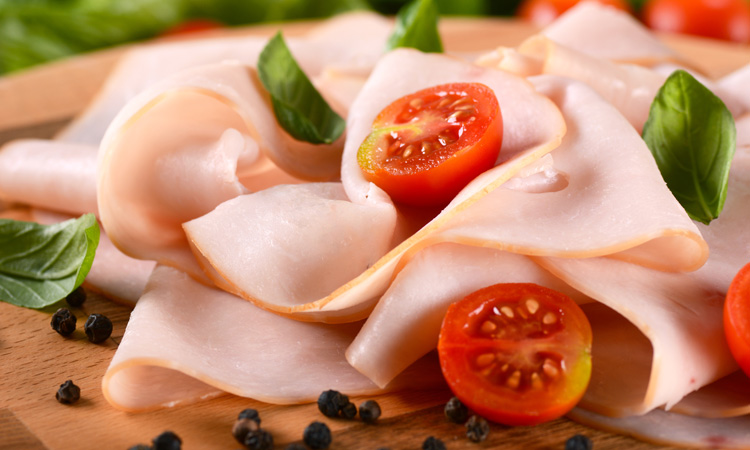 University of Massachusetts Amherst food scientists have produced a lower-salt processed turkey that consumers in a blind sensory test preferred to a full-salt version, according to a study published in the international journal LWT-Food Science and Technology.

“This is not the holy grail, but it is one strategy that can help reduce salt content in processed foods,” said senior author Amanda Kinchla, Extension Associate Professor of Food Science.

“The US significantly overconsumes sodium from so many places,” Kinchla said. “We know this, but we are not changing. Consumers don’t want to buy food with known reduced salt, because they think it’s going to taste yucky.”

Processed foods are high in sodium because of the sodium diffusion that takes place inside the food during processing. Food product developers have discovered that they can manipulate the size of salt particles and use less if the salt hits the tongue first and lingers. “That is amazing and clever, but it doesn’t work with deli meat or foods with a lot of water. The salt will dissolve; you can’t keep it on the surface,” Kinchla explained.

Under Kinchla’s guidance, food science Ph.D. candidate, Janam Pandya, and undergraduate student, Kelsey Decker, tested out a novel way to reduce the excessive amount of sodium in processed turkey meat by using different sodium salt species. To test this out, they incorporated sodium anionic salts, which held a larger structure or molecular weight than sodium chloride, or table salt.

“We processed a portion of turkey breast in traditional sodium chloride [table salt] and in these other salt species and measured a lot of different things: the morphology, texture and the sodium diffusion rate in the meat with different variables, such as processing time, temperature and salt conditions,” lead researcher Pandya explained.

The scientists then recruited 46 people on the UMass Amherst campus to participate in a sensory evaluation experiment of three different turkey samples: the control sample with full salt; and two with reduced sodium, one using disodium phosphate and the other a blend of sodium chloride and disodium phosphate.

“Sensory results reported that the turkey prepared in a blend of two sodium salts was perceived to be as salty as the control while providing juiciness and texture scores that were preferred over the control,” the study stated.

“In our study, the use of sodium salts with a larger molecular structure, such as disodium phosphate, slowed down the overall sodium diffusion rate inside the turkey meat but left enough sodium on the surface of the meat for people to perceive enough saltiness,” Kinchila said.

The study’s “promising results” suggest this is just one of the potentially successful strategies food scientists can pursue to make processed food healthier. “One approach is to find several small ways across the food supply to lower sodium without compromising the quality of the product,” Kinchla noted.