The study examined National Health and Nutrition Examination Survey (NHANES) data, a national survey of food intake, from 2001 to 2014 to assess food intake in infants and toddlers from birth to 23 months. 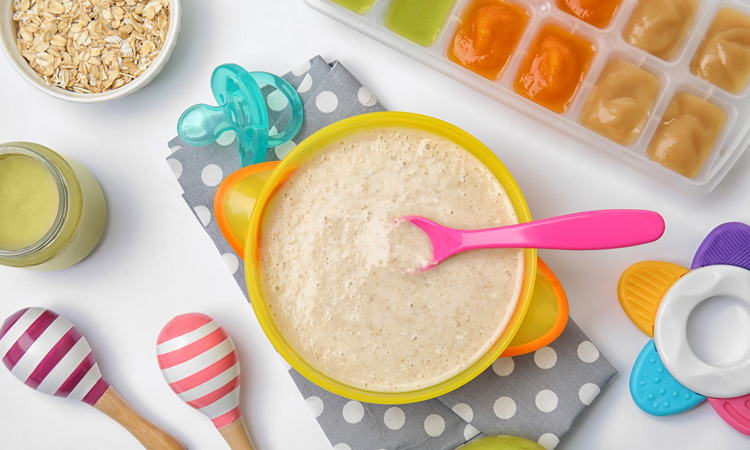 An investigation – supported by the Rice Foundation, the research arm of the US rice industry – of infant feeding patterns found infants and toddlers consuming baby cereal, such as rice cereal, had higher intakes of key nutrients of concern, such as calcium, magnesium, iron, zinc and vitamin E.1

Baby cereal consumers were also found to be less likely to have inadequate intakes of iron, calcium and vitamin E – important nutrients for developing infants. The study is said to illustrate the importance of rice baby cereal in the diets of infants and toddlers in achieving proper nutrition.

The study evaluated four age ranges – zero to three months, four to six months, seven to 11 months and 12 to 23 months – and the role of cereal consumption such as rice cereal. Researchers investigated whether baby cereal consumption (e.g. rice cereal) was related to different eating patterns, nutrient status and intakes of added sugars, saturated fat and sodium, when compared to non-cereal consumers.

When introduced as early as four months, baby cereal, including rice cereal, was associated with improved nutrient status. From four to six months of age, babies who ate cereal took in more calories, carbohydrates, whole grains and key nutrients, like vitamin B6, calcium, iron and magnesium.

As infants got older, the results remained similar. From seven to 11 months, cereal consumers were found to have higher intakes of carbohydrates, vitamin E, calcium, iron, zinc and magnesium. Beyond the first year of life, baby cereal consumption continued to be associated with greater iron, zinc and vitamin E intake.1

“Based on the results, diet recommendations for infants from birth to 23 months should include baby cereal – like rice cereal – due to its role in maintaining nutrient status which supports growth and development,” suggested study author, Theresa Nicklas, DrPH.

Overall, the study is said to demonstrate that there is a strong public health benefit to feeding infants ages four to 11 months infant baby cereal.1 Data indicates that feeding cereal, such as rice cereal, as one of babies’ first foods has a positive impact on nutrient status, the researchers claimed.

“The results of this study build a strong case for the benefits of feeding your infant baby cereal,” said Nicklas. “As the Dietary Guidelines Advisory Committee looks to evaluate food patterns and nutrient status of infants aged zero to 23 months, it is important to consider the role of baby cereal in the diets of infants and toddlers,” she continued.