Festive drinks contain an excess of sugar, according to Action on Sugar

A UK survey, which analysed both the sugar and calorie content of the largest available sizes of hot chocolates and seasonal lattes made with milk and milk alternatives by popular high street chains, allegedly revealed that certain seasonal beverages contain almost as much sugar as three cans of cola. 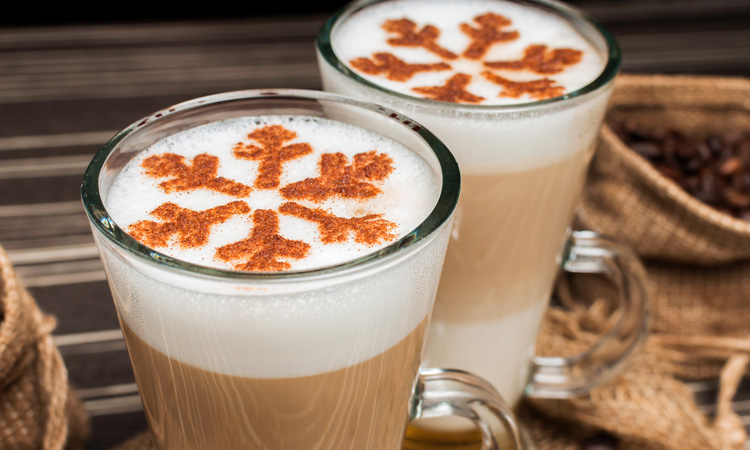 Many UK high street coffee chains are failing to make progress towards the government’s voluntary sugar reduction targets (overseen by Public Health England) with their festive milk and milk alternative hot beverages – most of which would be eligible for the Soft Drinks Industry Levy – according to a new nationwide survey by Action on Sugar, based at Queen Mary University of London.

The survey, which analysed both the sugar and calorie content of the largest available sizes of hot chocolates and seasonal lattes made with milk and milk alternatives (such as oat, almond, coconut, soya and rice-coconut) by popular high street chains, revealed certain seasonal beverages contain almost as much sugar as three cans of cola. Furthermore, all of the largest available size products surveyed would reportedly receive a red traffic light for total sugars (>13.5g/portion) – the exception being Costa’s Gingerbread Lattes (Medio) (made either with milk, soya or almond milk).

According to the survey findings, the worst hot chocolate ‘offender’ was Starbucks Signature Caramel Hot Chocolate with whipped cream, using Oat Milk (Venti). This beverage reportedly contained 23 teaspoons (93.7g) of sugar in one drink, and 758 calories – what Action on Sugar described as the same as eating four Tesco white chocolate and strawberry muffins.

The survey revealed that Starbucks also ranked the highest for seasonal lattes with its Gingerbread Latte with Oat Milk allegedly containing over 14 teaspoons of sugar (56.6g) and 523 calories per portion – the equivalent of eating 17 custard cream biscuits, Action on Sugar reported. If the same hot beverage was served with their almond milk instead of their oat milk, Action on Sugar said that this would reduce the sugar content by 4.5 teaspoons of sugar (18g).

Even without the added sugar from syrups, the sugar content of milk alternatives was said to vary greatly. Unsweetened milk alternatives are said to be naturally similar or lower in sugars than cow’s milk and Action on Sugar has argued that using sugar-sweetened milks as well as sugary syrups is unnecessary.

Despite being called upon for their high sugar content in Action on Sugar’s hot beverage survey in 2016, more than one in four (27 percent) directly comparable products are said to have seen no decrease in sugar but have instead increased. In 2016, a regular Vanilla Latte in KFC reportedly had 19g sugar per serve but now has 26g sugar per serve. However, a KFC regular Mocha has reduced sugar from 45.1g per serve to 21g per serve, showing no consistency in its reformulation process, argued Action on Sugar.

“It is shocking that so many high street coffee chains are wilfully putting their customers’ health at risk despite sugar reduction targets for sugary milk drinks being set in 2018. Responsible coffee shops have shown reformulation is possible within this category. For example, Costa have made some significant reductions in sugar since 2016 and some now offer smaller sizes as standard for seasonal drinks,” said Holly Gabriel, Registered Nutritionist at Action on Sugar.

“Coffee shops and cafes need to take much greater steps to reduce the levels of sugar and portion sizes, promote lower sugar alternatives and stop pushing indulgent extras at the till.”

Graham MacGregor, Professor of Cardiovascular Medicine at Queen Mary University of London and Chairman of Action on Sugar, added: “It is vital that whichever government is in power next week fully commits to the target to halve childhood obesity by 2030, and to the current agreed Childhood Obesity Plan Chapter. This will mean giving full control to PHE to deliver a robust prevention programme and the authority to ensure that a largely irresponsible food industry fully complies – and that must include taxing these sugary milk-based drinks in the same way as soft drinks.”