Does the UK have the right infrastructure for an agroforestry revolution?

In the second part of a two part series, Vincent Walsh and David Haley explore how agroforestry could be implemented into the UK agricultural market. 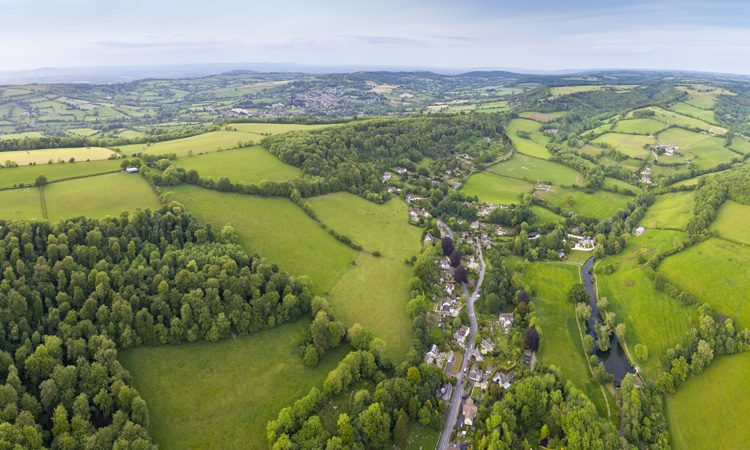 Working with farmers In 1998, the Institute for Terrestrial Ecology (Now CEH) – alongside academics and US ecological artists, Helen Mayer Harrison and Newton Harrison – curated an artwork that defined an area in Northern England as a ‘bioregion’ with the potential to become a diverse, interconnected mix of forest-farming, new housing, biodiversity-carbon sink.

With agroforestry at its ecological heart, this complex, yet powerfully simple idea, was self-financing, self-determined, self-reliant and sustainable. In 2018, Michael Gove, the Chancellor of the Duchy of Lancaster, UK, declared the same region to be the Northern Forest.

Part one of this series explored how agroforestry could help support the climate agenda, and this sequel looks into its potential implementation within the UK.

The UK government has suggested that income from farming in the North West region alone increased by 17 percent between 2013 and 2017 to £332 million (compared to a three percent increase for England as a whole). The biggest contributors to the value of the output (£2.1 billion), which were milk (£713 million), poultry meat (£274mn) and cattle for meat (£239mn), accounted for 59 percent.

Research has suggested that the predominant farm type in the North West region in 2017 was grazing livestock farms, which accounted for 62 percent of the area, and dairy farms that covered a further 18 percent. Crops only accounted for 20 percent.

In recent years, crop farming in North East and South West England has suffered from devastating flood events, suggesting that UK agriculture as a whole needs to diversify in order to adapt to climate change. Agroforestry could provide strategic infrastructure, alongside other forms of natural flood defence systems, to ameliorate the effects of future flooding.

Does the UK have a skill gap?

The UK has the land, but does it have the skills? Compared with Germany, the Netherlands, Australia and parts of South America, the UK needs to catch up on agroforestry skills. According to a Defra survey in 2013, the number of farm holders under the age of 45 fell by almost a quarter in 2000, to just 14 percent in 2010. With the average age being 59, the population of British farmers is declining and ageing.

Given that the UN estimates that food production must double by 2050 to feed the growing population, it would seem that we need to urgently address the potential skills shortage. However, this is not true across the whole sector, as the expanding areas of food-tech and agri-tech have a youthful profile. This should enable the sector to become more adaptive, decentralised, specialised, collaborative and innovative. Indeed, this is happening at an exceptional rate with increased networks, communities, platforms and a diverse range of funding pathways both private and public.

Agroforestry needs to be positioned as a critical technology for land-based innovation. In the Agroforestry Handbook (2019), Dr Paul Burgess of Cranfield University, agrees with this sentiment, and states that agroforestry needs to sit alongside other regenerative practices, such as permaculture, organic agriculture, no-till polyculture, holistic grazing and keyline land preparation, organic crop production, tree crops, tree intercropping, silvopasture, multi-paddock grazing, organic grassland systems and rewilding. In other words, agroforestry can provide the pathway to a diverse and climate resilient landscape.

The Ellen MacArthur Foundation, a leading organisation in the circular economy sector, state that 80 percent of food will be consumed in cities by 2050. This means that regenerative systems hold the key to creating a healthy food system, and it is evident that a whole range of ecological practices are needed, highlighting the requirement for regenerative agricultural technologies like agroforestry. In the North of England, there is a whole range of farm sizes, from five acres to 100 acres, representing a huge opportunity for innovation; there are literally thousands of acres of land are ready to be elevated.

The regenerative agriculture report by Cranfield University, Agro-forward (2018), also notes that agroforestry represents 291 million hectors of land use globally and could plausibly be expanded to 371 million hectors by 2050. This signifies huge opportunities for agroforestry throughout the UK, and specifically across Northwest England.

Is the supply chain ready for an agroforestry revolution?

Supply chain is a problem for agroforestry (especially for UK perennial food crops), and for farming as a whole. In fact, farms have closed or stopped production due to globalised food pricing. UK farmers could not produce food as cheaply as those in Europe and other parts of the world. If UK farmers and retailers, for example, can find innovating ways to close the logistics and marketing gap for UK regenerative agricultural food crops, we could find more efficient ways to market their produce, which would be a huge economic advantage.

A good example of supply chain innovation is Riverford Organic Farmers, who work with UK farmers, offering fresh and 100 percent organic produce. In return, the farmers can sell direct to consumers via the Riverford veg box offer.

Other options for farmers could see them link up with innovating restaurant platforms, who are searching for more sustainable, regenerative and ecological food crops like Farmacy, the West London-based vegetarian restaurant.

However, if agroforestry technology is to expand in the UK, a huge amount of supply chain innovation needs to happen, and this requires new conversations, negotiations and collaborations with a range of stakeholders to enable an adaptive and decentralised supply chain which leads to new market and innovation pathways.

As a whole, the food sector needs to be more integrated and circular. The possibilities for integrating food processes that support circularity, sustainability and resilience will create enormous opportunities for economic gains, beyond outmoded models of endless growth.