What’s fuelling the development of the global frozen food industry?

Frozen food products are increasingly becoming an integral part of our daily diet around the world, but especially in European countries. Busy lifestyles have driven the food manufacturing industry to produce new products to meet the rising demand from consumers, which, in turn, fuels the overall frozen food market. A report has revealed that the global frozen food market was estimated to be valued at USD 219.87 billion in 2018 and is projected to grow at a CAGR of 5.14 percent during the forecast period to reach USD 282.50 billion by 2023. 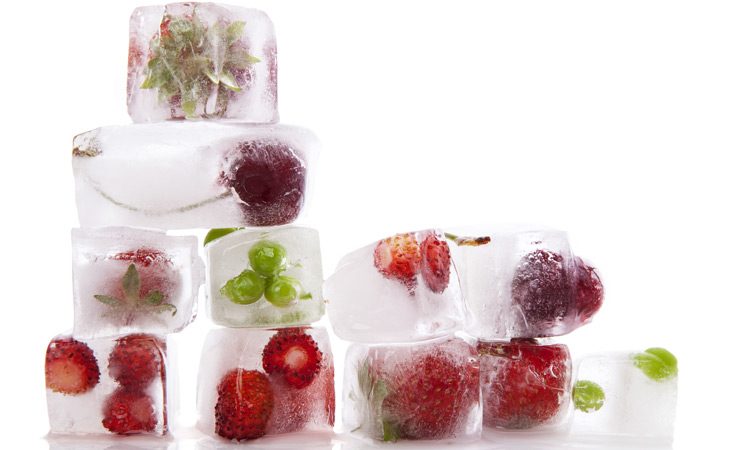 International trade of these products has gained prominence, as a result of increasing demand, complemented by improved transportation facilities. Increased consumption of frozen food products in the emerging markets of Asia Pacific and South America has also contributed to an increase in the sale of frozen bakery products. The demand in developing regions is driven by an increase in disposable income.

Other trends, such as packaging and shelf-life enhancement, present further growth opportunities for the frozen food market. As a result, companies in the food market are investing in technologies to store refrigerated or retarded dough, frozen vegetables and meat, partially-cooked and fully-cooked food for longer durations. Factors such as developments in the retail landscape and technological advancements in cold chain are driving the frozen food market, globally. However, the preference for fresh and natural food products and the need for maintaining a constant temperature for the sustainability of frozen foods act as restraining factors for the market.

Investments in cold chain to drive the frozen food market

Cold chain infrastructure has played an important role in driving the frozen food market, as it helps to transport products at both the domestic and international level. The global demand for fresh and processed fruits & vegetables is increasing, as the consumption habits of the urban population change. This demand is fulfilled using cold chain logistics to maintain the temperature and quality of food products. The rise in the export and import of frozen food is possible due to the strong global cold chain services available in developed economies. 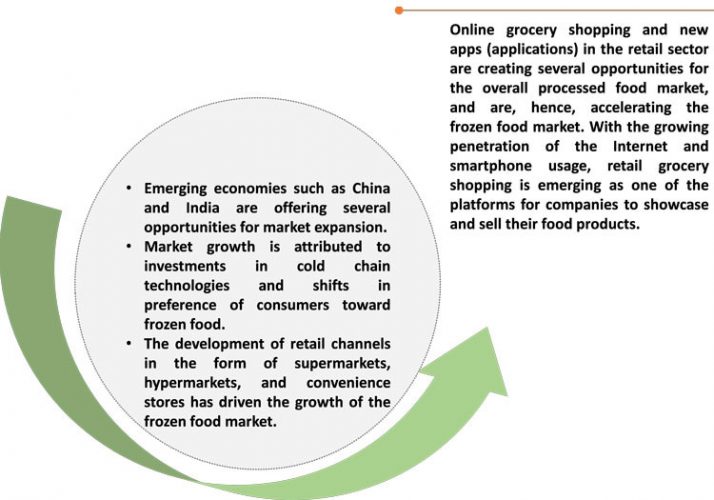 One of the latest trends driving the frozen food market is online grocery shopping and the introduction of new apps, which makes it convenient for consumers to pick their preferred products. Consumers are inclined toward online shopping due to factors such as convenience and variety.

Fruits and vegetables – fastest-growing segment in the frozen food market

The frozen food products market consists of fruits and vegetables, dairy products, bakery products, meat and seafood products, and convenience food and ready meals, as well as other products. Developed countries such as the US, Germany, France, and Japan are dominating the frozen food market due to the high purchasing power of consumers. The convenience foods and ready meals segment holds the largest market share; this is due to the changing and busy lifestyles of people, globally, which has increased the global consumption of frozen foods.

Figure 2: ONLINE PURCHASE OF GOODS AND SERVICES IN THE EUROPEAN UNION (2018) / Source: Eurostat

Emerging markets such as Russia, India, and the Latin American countries have a huge potential for frozen fruits and vegetables due to lower adoption rates. Growth in the frozen food market is stagnating in countries such as the UK, Germany, and the Scandinavian countries due to the maturity of these markets. Additionally, countries such as Italy and Spain provide ample opportunities for market penetration of these products. These markets have a high market share due to the increasing penetration of frozen vegetables such as potatoes, broccoli, cauliflower, and carrots. The major companies have been steadily shifting focus to these high potential markets with low adoption rates.

Food service industry estimated as largest across all regions

The food service segment accounted for a larger share of the global frozen food market. The global food service industry is growing at a faster pace due to high demand for fast food, the rise in the population of working women, increase in disposable income levels, and growth in food delivery channels.

Among the delivery channels, QSRs dominate the food service segment in the frozen food market due to the high contribution of QSR chains such as McDonald’s, Starbucks, Subway, Burger King, Pizza Hut, KFC, and Dominoes, with their large number of outlets across the world.

Along with restaurants, the increase in the number of national and international brands in the hotel industry is expected to drive the demand for frozen food during the forecast period. 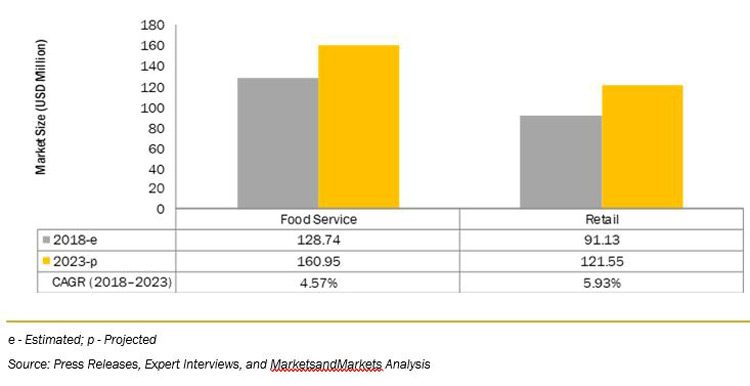 Europe estimated as the dominant market

The value market for frozen food is estimated to be largely concentrated in Europe, followed by North America and Asia Pacific. Europe acquired the largest share of the global frozen food market in 2017. The European frozen food market was valued at USD 68,951.3 million in 2017; and is projected to grow at a CAGR of 4.3 percent from 2018. Italy is projected to reach a value of USD 8,282.6 million in 2023, recording the highest CAGR of 5.0 percent during the forecast period. Increasing consumption of fruits and vegetables has been witnessed in Europe. This is due to changing consumer preferences for a vegan diet, which is indirectly contributing to the growth of the frozen food market, particularly the fruit and vegetable segment.

Germany accounted for the largest share of 23.5 percent in the European frozen food market in 2017. According to the German Frozen Food Institute, nearly 17,000 products are available under the frozen food category, which makes it one of the most fragmented markets. Germany is an attractive market for manufacturing companies as well as exporters. The frozen food market in Germany has a good infrastructure and a large consumer base with high purchasing power. The European market is driven by the robust growth of the food industry, which has supported the ready-to-eat snack food industry’s acceleration in this market.

The global frozen food market, especially in Asia Pacific, is growing rapidly. This growth will continue in the future with a focus on producing new specialty frozen food products with plenty of innovations for health-conscious consumers. The Asian Pacific frozen food market is highly concentrated in China and Japan due to the high consumption of meat and fish. Japan is the second-largest market for frozen food in Asia Pacific. Similar to the global frozen food market, the Japanese market is highly fragmented with major companies such as Nichirei Corporation (Japan), Katokichi (Japan), and Ajinomoto Co (Japan). These companies are also focusing on expanding their horizons overseas by launching new products and acquiring new companies. In 2017, Ajinomoto Foods Europe S.A.S. (Japan) acquired Labeyrie Traiteur Surgelés S.A.S. (France), a frozen food company. This acquisition was made to strengthen the company’s position in France. Ajinomoto Co., Inc. launched its frozen foods segment in France. This step was taken to increase the company’s market share in France.

Globalisation and increasing international trade are the main factors responsible for the development of the frozen food industry, globally. With economic development and increasing purchasing power parity (PPP), consumers can afford premium products with improved nutritional value and shelf life. This drives the trade of various food products between regions. According to the Agriculture Marketing Resource Centre (AGMRC), the US is the world’s largest producer of strawberries. In 2014 it produced 3 billion pounds of strawberries, valued at USD 2.9 billion, of which 63.4 million pounds of frozen strawberries were exported, valued at USD 45 million.

The global seafood market is also witnessing immense growth due to the health benefits offered by these products. According to the Food and Agriculture Organization of United Nations (FAO), an estimated 2.3 percent hike in global fish production, combined with good market conditions around the world, led to a significant boost in trade revenues in 2017. India, Peru, Ecuador, Chile, and Norway were the top exporters of seafood in 2017. Increase in the export and import of such products boosts the overall frozen food market growth.

One response to “What’s fuelling the development of the global frozen food industry?”