Risking Everything: Our addiction to fake foods is harming us in more ways than we think

Our devotion to plastic convenience is coming back to bite us. It is time for action, says Frederikke Magnussen, co-founder of A Plastic Planet, before it’s too late. 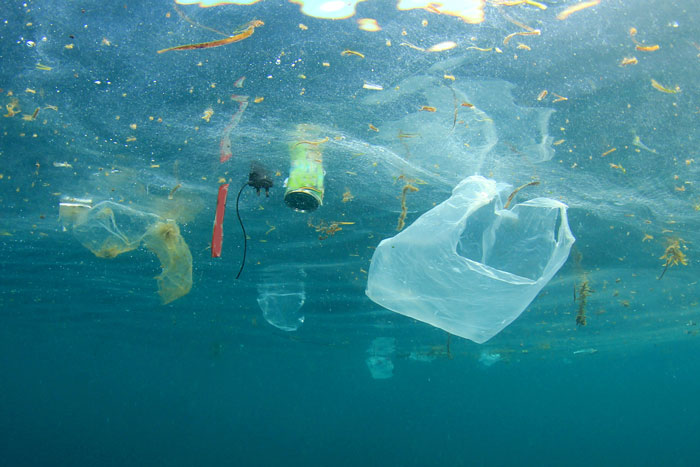 A PLASTIC PLANET: The group campaigns for a plastic free aisle in supermarkets.

THE meal-in-a-pill has been a staple of science fiction for decades. The 1930 musical comedy Just Imagine tells the story of a man who is woken after being in a coma for more than half a century. Waking up in 1980s New York, the man goes to a café and orders his favourite meal: roast beef and vegetables followed by apple pie and coffee. Unaware of the realities of the world he now finds himself in, he is served the meal in a single pill.

Sixties animated sitcom The Jetsons also offered an insight into what food and drink in the future might look like. The show depicts a vision of the future where cooking has been eradicated and ovens are obsolete. Instead of slaving over a hot stove in preparation for an evening meal, members of The Jetson family simply press a button on a machine and a food pill is dispensed within seconds.

The meal-in-a-pill concept dates back more than a century. In 1893 the American Press Association asked writers from across the US to forecast what the world would look like in 1993. Mary Elizabeth Lease, an American suffragette predicted that, by the year 2000, mankind would be sustained solely by synthetic food consumed in condensed pill form.

While the extreme predictions of generations of forecasters have proven a little far-fetched, it’s clear that they were right about something. We are increasingly becoming emotionally detached from the luscious foodstuffs that mother nature makes possible. In the throes of a self-defeating addiction to convenience and the quick thrills of processed produce, we have poisoned our relationship with food.

Convenience: the promise of a pill turns to a plastic reality

We are eating more processed food than ever and getting through record levels of throwaway packaging. Whereas an evening meal in the 1950s might have been prepared from fruit and vegetables brought home in a paper bag, now dinner consists of a takeaway from a plastic container. A Euromonitor study revealed earlier this year that Britons now eat almost four times as much packaged food as it does fresh produce.

The health effects of a diet rich in processed foods are well-documented, yet virtually no attention is paid to the potentially devastating effects of the plastic packs food is contained in. A wealth of evidence now suggests that plastic pollution is contaminating the food chain, endangering human health.

The increasing presence of plastic in seafood should worry us all. Plastic waste is currently accumulating in the ocean at a mind-boggling rate, settling on the ocean floor across vast stretches of open sea. Fish actively seek out plastic because it smells like food. Approximately a third of fish caught off the coast of South West England are now thought to contain traces of plastic. If current trends continue, by the end of the century people who regularly eat seafood could be consuming 780,000 pieces of plastic a year.

A growing body of evidence suggests that people who eat contaminated seafood are exposing themselves to a raft of poisonous chemicals. Plastic-contaminated fish has been found to contain toxins such as lead, cadmium and mercury. Other toxins in plastics are directly linked to cancers, birth defects, immune system problems, and childhood developmental issues.

The ubiquity of plastic means that the sheer scale of the unreported health crisis is overwhelming. The plastic crisis is a complex problem but the solution is blissfully simple. Developing intricate plastic recycling systems is not going to deliver the transformative change that is needed to tackle the plastic problem. We’ve been able to recycle plastic products for years, yet our oceans are still saturated with rubbish. Despite growing recycling across the world, the vast majority of the 300 million tons of plastic produced globally each year remain unrecyclable.

The answer then is clear. We have to use less plastic.

Earlier this year, I co-founded activist group A Plastic Planet – the campaign for a Plastic Free Aisle in supermarkets. We believe that a healthier, greener plastic-free future is both necessary and achievable. A Plastic Free Aisle in supermarkets would drive a real shift in our relationship with food and the packaging that encases it. We want to help consumers rediscover their emotional connection with real food presented in truly sustainable packaging.

Our decades-long addiction to processed food in throwaway packaging is doing immense damage to our wellbeing. It’s high time we turned the tide on plastic.

Frederikke Magnussen is Co-Founder of campaign group A Plastic Planet, the campaign for a Plastic Free Aisle in supermarkets.