Ash Amirahmadi, vice-chair of Dairy UK, has called for the government to work with the dairy sector to rethink its proposed tariffs on cheese. 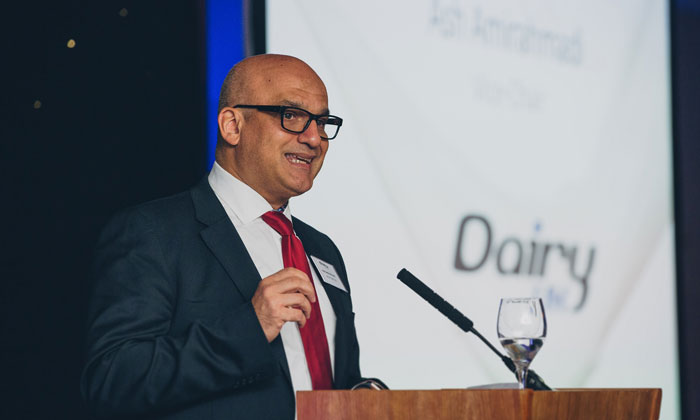 Speaking at the Dairy UK Annual Dinner, Ash Amirahmadi, vice-chair of Dairy UK, has called on the government to revisit their proposed tariff rates on cheese.

In his speech, Mr Amirahmadi outlined how, even though the government had recognised the importance of applying tariffs to dairy imports, those chosen for cheddar were inadequate to prevent price volatility or a loss of productivity and cause harm to the UK dairy industry.

He also highlighted Dairy UK’s impact assessments on the effect of WTO tariff rates on the sector, which demonstrated a potential shock to raw milk prices.

“One thing we can all agree on is that trade policy is key to the success of the sector going forward,” Mr Amirahmadi said. “We stand ready to work with our colleagues in government to ensure the voice of both dairy and agriculture is reflected in trade and tariff discussions.”

He also outlined the dairy industry’s proactivity on tackling environmental concerns, reflecting both the drive of the sector as well as consumers, to ensure the long-term sustainability of the industry. Mr Amirahmadi outlined how over the course of the last decade the industry had achieved an 18 percent improvement in both energy and water efficiency and had recovered or recycled 93 percent of all factory produced waste.

Mr Amirahmadi then went onto call on the industry to unite and fight the misinformation on dairy from detractors, highlighting that dairy foods continue to be found in 96 percent of fridges in the UK despite reports than consumers were turning away from the category.

“If we don’t inspire our consumers to continue to love our products, nobody will. We all have a role to play in telling the dairy story,” he concluded.