Four ‘robotics obsessed’ graduates from MIT, one of the world’s leading engineering research institutions, have taken a leap forward in the field of food service automation. 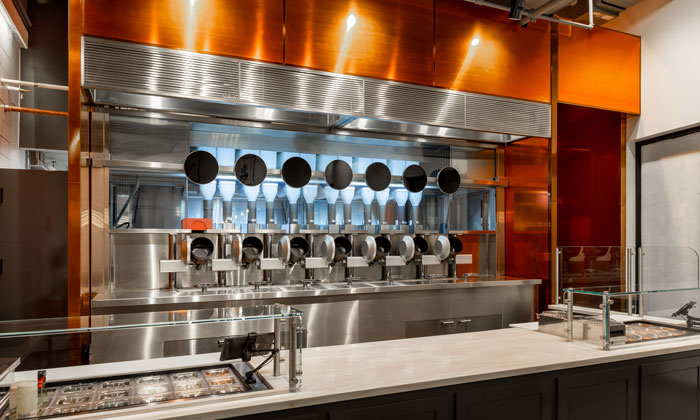 ROBOWOK: The counter at Spyce in front of the hoppers and woks in which the food is prepared

The days of Gordon Ramsey-esque chefs hurling insults around kitchens full of brow-beaten underlings may soon be at an end. The future of food preparation looks a good deal more peaceful, quieter and, in the case of one restaurant in Boston, entirely human-free.

A quartet of graduates from the world-famous Massachusetts Institute of Technology (MIT) have opened a restaurant in which all the chefs have been replaced by robots.

Less glamorous, or perhaps less frightening, than the image of a knife-wielding android squeaking around a kitchen on rubber treads, Spyce instead sees ingredients automatically fed into spinning drums in which they are induction heated and blended before being tipped onto plates and served.

Automated kitchens are not a new idea, but Spyce takes it to the next level by bringing it into the out-of-home sector and making it affordable – prices start at US$7.50 (£5.62) a bowl.

Writing on the restaurant’s website, the four founders, Michael Farid, Kale Rogers, Luke Schlueter and Brady Knight, described how the restaurant came into being.

“We were four really hungry MIT students and water polo teammates tired of spending $10 on take-out lunches and dinners,” they said. “Our athletic appetites required better nutrition but our student budgets didn’t allow for that kind of expense. While we ate our bland chopped salads and stir-frys, we dreamed of an alternative: a robot that cooked tasty and nutritious meals, served them, and cleaned up after.

We were all robotics-obsessed engineers, so we quit yapping and built one in our fraternity basement. Two years and many burns, bruises, and brussel sprouts later, we’re opening our first restaurant and we couldn’t be more excited.”

Their restaurant, which opened in April, has already garnered a great deal of media attention, with editorial from the likes of The New York Times, The Washington Post and (perhaps unsurprisingly) the Boston Globe.