The latest statistics bring the total reduction in two years to more than 50 per cent. 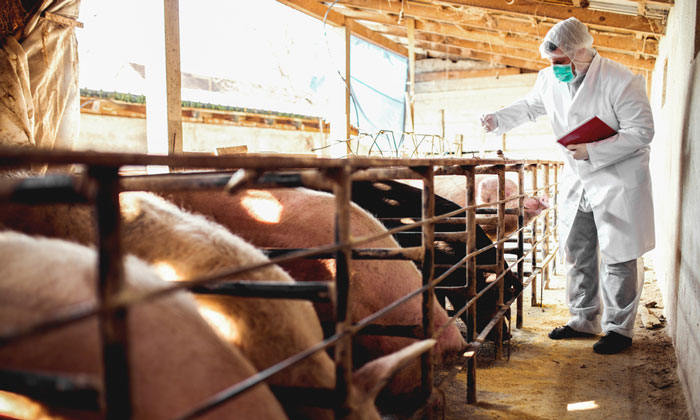 CHECK UP: Antibiotic resistance in livestock is concerning for human health

Figures revealing a 28 per cent reduction in antibiotic use in UK pig farms over 2017 have been welcomed by leading meat industry organisations.

The data was taken from the electronic medicine book (eMB), which represents 87 per cent of pigs slaughtered in the UK. It showed antibiotic usage on pig farms dropped from 183 mg/PCU to 131 mg/PCU within 12 months.

The news has been welcomed by the Agriculture and Horticulture Development Board (AHDB) which has worked closely with the National Pig Association (NPA), the British Pig Association (BPA), Pig Veterinary Society (PVS), meat levy bodies Quality Meat Scotland (QMS) Northern Ireland Pork and Bacon Forum (NIPBF) and Hybu Cig Cymru – Meat Promotion Wales (HCC), as well as the Responsible Use of Medicines in Agriculture Alliance (RUMA) to help cut the use of antibiotics.

It comes just seven months after targets were announced by the Targets Task Force, set up by RUMA, to reduce antibiotic usage in the pig industry by over 60 per cent between 2015 and 2020.

AHDB’s Senior Veterinary Manager Mandy Nevel said: “This is a great industry effort with all parties fully engaged and determined to demonstrate responsible use of antibiotics in pigs. We must keep up the momentum to reduce use further in order to achieve our target of 99 mg/PCU by 2020.”

Developed by AHDB Pork and the Veterinary Medicines Directorate (VMD), the electronic medicine book is available to all UK producers and is supported by the Northern Ireland, Scottish and Welsh levy bodies.

It provides an electronic version of the paper medicines book to record and quantify usage so producers can review and optimise their on-farm antibiotic use.

Since October last year, it became a Red Tractor requirement that quarterly antibiotic data are entered into eMB.

Prof Peter Borriello, Chief Executive Officer of the VMD, said: “Congratulations to the pig sector on these impressive reductions in antibiotic use in 2017, which build on those already seen in 2016.

“These achievements are the result of high level collaboration across the industry to deliver on a challenging and rigorous on-going plan to reduce and refine antibiotic use, while maintaining the health and welfare of pigs.”

Christine Middlemiss, the UK CVO, said: “The reduction in antibiotic usage achieved by the UK pig industry over the last two years are excellent. This has been achieved by the sector working together and following a clear agreed plan of action, which is focused on responsible reductions alongside the prevention and management of disease.

“This approach is essential for the sustainability of British agriculture and will help to maintain the effectiveness of antibiotics in the future.”