A study looking into the relative merits of different plant based milk to the lactose intolerant has found soy to be the most nutritious. 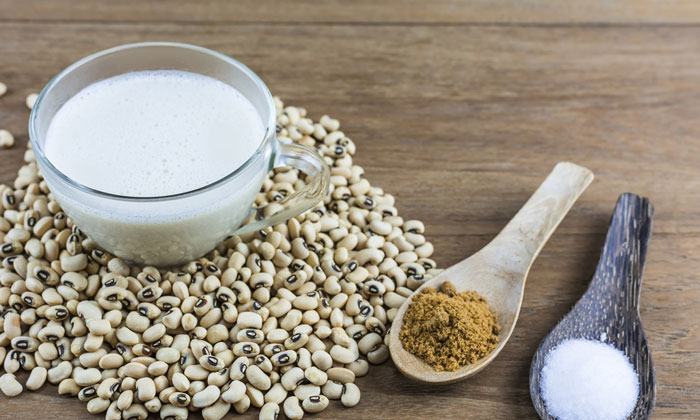 DREAM BEAN: Soy was the best replacement for the nutritional value in cow's milk

Researchers at the McGill University in Montreal looked at the four most-commonly consumed types of milk beverages from plant sources around the world – almond, soy, rice and coconut. They compared their nutritional value with that of cow’s milk, which the scientists said remained the ‘most nutritious’, in the search for the one which offered the most benefits to the lactose intolerant.

Soy emerged as a clear winner, with a “balanced nutritional profile”. The milk substitute, which has been used for four decades, offered a range of health benefits, including  the anti-carcinogenic properties of phytonutrients present in the milk known as isoflavones.

However, there remained, as with all the tested ‘substitutes’ and the cow’s milk, a range of drawbacks. In the case of soy, these were the ‘beany flavor‘ and the presence of anti-nutrients (substances that reduce nutrient intake and digestion).

Widely consumed in Asia and South America, coconut milk was found to have no protein and few calories, and most of those came from fat. But consumption can help reduce levels of harmful low-density lipoproteins (bad cholesterol) that are associated with cardiovascular diseases. 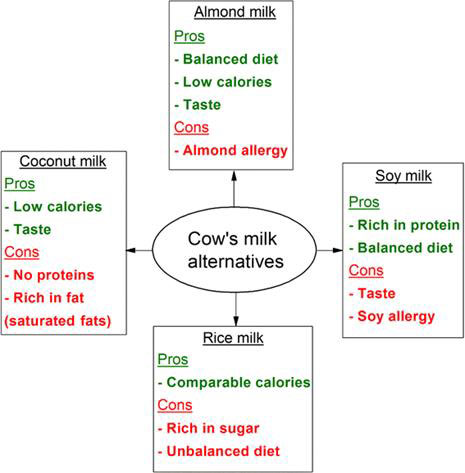 A flowchart illustrating the pros and cons of various milk alternatives

Rice milk was found to be relatively low in nutritional value. One of the pros of rice milk is that it can act as an alternative for people with allergies caused by soybeans or almonds. Concerns, apart from the high carbohydrate count, is that consumption of rice milk without proper care can result in malnutrition, especially in infants.

Finally, almond milk had benefits like a high content of monounsaturated fatty acids (MUFA) that are considered helpful in weight loss and weight management. MUFA also helps in reduction of low-density lipoprotein (bad cholesterol). The scientists noted a need for consumers to seek complementary sources of food to provide essential nutrients.

The study also points out that there are drawbacks to cow’s milk even among the non-lactose intolerant. These included the presence of various pathogens like Salmonella spp and Escherichia coli O157:H7 in milk have been associated with disease outbreaks around the world.

Researchers described cow’s milk as a “wholesome, complete food, providing all major nutrients like fat, carbohydrates and protein” adding that it “can help humans by providing a wide range of host-defence proteins because various beneficial anti-microbial effects are found in both human and bovine milks. (E.g., a study shows that in the case of infants, consumption of cow’s milk has considerably reduced risk of fever and respiratory infections)”.

They said that more work will need to be done to understand the effects of various conventional and novel processing methods on the nutritional profile, flavour and texture of these alternative milks.

The review was written by PhD Candidate Sai Kranthi Vanga and his supervisor Vijaya Raghavan of the Department of Bioresource Engineering at McGill and was recently published in Journal of Food Science Technology.