Samples of chicken of varying national origin were taken from 37 different establishments in France and tested for compliance with European water-content regulation. 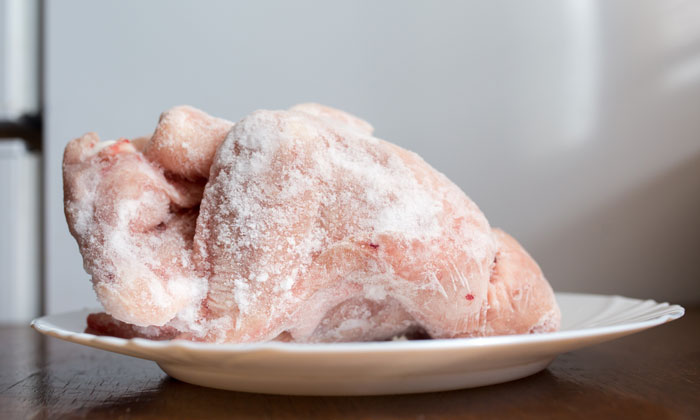 POULET CONGELE: Some of the samples came from other EU countries

A survey has found that nearly a quarter of French frozen chicken samples exceeded the European Union’s limits for unacknowledged water content.

The results of the Direction Générale de la Concurrence, de la Consommation et de la Répression des Fraudes’ (DGCCRF) annual study into the water control of frozen, quick-frozen or fresh poultry was published by on January 3.  It details the survey conducted in 2016.

In it, 44 products (frozen, deep-frozen and fresh) taken from 37 different establishments were analysed by the Montpellier laboratory. They were sourced from both production (36 per cent) and the wholesale/retail stage (64 per cent).

It was found that 23 per cent of these did not conform to the EC water limits, resulting in seven warnings and one notification to the police.

Of the 10 incidents of non-compliance five were noted to concern frozen or deep-frozen products cooled by the ‘immersion method’. These were samples which were immersed in cold water as part of the freezing process – the method which naturally results in the highest level of water absorption.

Some of the remaining five came from Romania. When the supply centre was informed, 132 packages were withdrawn from sale. The company has been asked to make the labelling mandatory “Moisture content above the EC limit”. In agreement with its supplier, the group preferred to move towards a destruction of the lot.

If a product exceeds these limits, the producer must affix a banner or label bearing in red capital letters the words ‘Content in water above the EC limits‘ to the packaging of its product.

The DGCCRF acknowledged in the publication of its 2016 investigation that an added water content is technically unavoidable for frozen or frozen poultry meat.