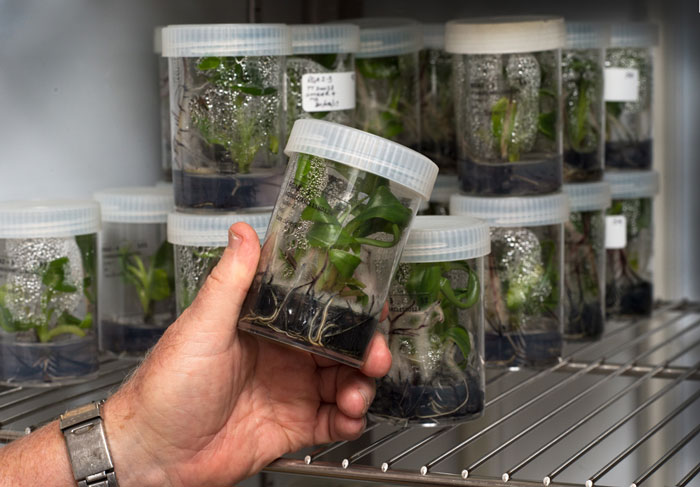 LIGHT AT THEN END OF THE TUNNEL: The disease-resistant RGA2-3 Cavendish banana plant in the lab.

It has been nearly 150 years since Panama disease was observed in Australian bananas – the first ever recording and almost twenty years before it appeared in its namesake Central American nation. Since then it has become a pandemic, threatening the global banana population with extinction.

Now, researchers from Queensland University of Technology in Brisbane, the city where it was first detected, have designed genetically modified Cavendish bananas with resistance to the devastating soil-borne disease.

It is caused by the fungus Fusarium oxysporum f.sp. cubense Tropical race 4 (TR4) and also is known as Fusarium wilt of banana.

In the world’s first field trial with genetically modified banana plants conducted in heavily TR4-infested soil, one Cavendish line transformed with a gene taken from a wild banana remained completely TR4 free, while three other lines showed robust resistance. The results have just been published in Nature Communications.

The team cloned the so-called RGA2 gene from the wild progenitor of edible bananas, Musaacuminata ssp. Malaccensis, which has a remarkable resistance to TR4. One modified Cavendish line (RGA2-3) remained TR4-free for the three years of the trial. Three other lines modified with RGA2 showed strong resistance, with 20 per cent or fewer plants exhibiting disease symptoms over a period of three years. In contrast, 67 per cent to 100 per cent of the control bananas were either dead or heavily TR4-infected after three years, including the Giant Cavendish somaclonal variant 218, currently heralded as being resistant to TR.4.

Running from 2012 to 2015, the field trial was led by Professor James Dale from Queensland University of Technology. It was conducted on a commercial banana plantation outside Humpty Doo in the Northern Territory of Australia previously affected by TR4. The soil was also heavily reinfested with disease for the trial.

The research team of Gert Kema, Professor in Tropical Phytopathology at Wageningen University & Research, partnered in the project.

He said: “The GM banana lines show that the activity of the RGA2 gene is strongly correlated with the level of resistance to TR4. This is an absolute breakthrough as it concerns the first identified resistance gene to Fusarium wilt. However, this is only the start – some light at the end of the tunnel. The next step is to deploy the immense diversity in wild bananas to diversify the fruit and establish a resilient and sustainable banana production for all.

“In 2012, we determined that this banana species has valuable resistance to TR4 and Professor Dale’s group has now confirmed this by cloning the underlying gene. Our role was to validate the fungal infections using the molecular techniques that we developed to detect and quantify TR4.”

While Cavendish bananas have been found to also have this RGA2 gene naturally, it is not very active in susceptible plants. New research is looking at how to ‘switch on’ the gene in Cavendish bananas to make them TR4 resistant.

The researchers have begun an expanded field trial on the same plantation, growing the four resistant RGA2 lines and newly developed lines of modified Grand Nain and Williams Cavendish varieties. They have the capacity to screen up to 9,000 plants for resistance and to determine yields and other important traits over the coming five years.