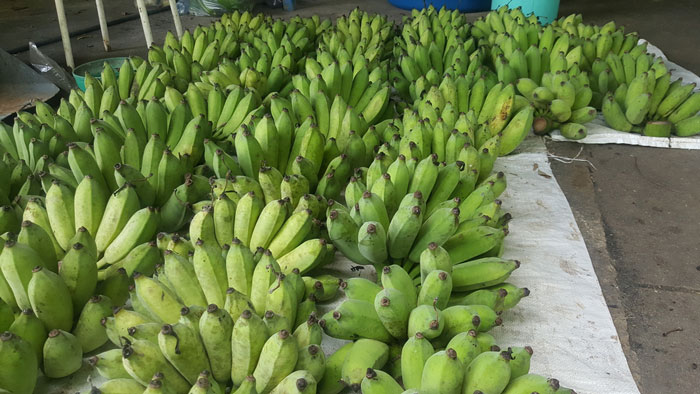 BANANA DRAMA: Steps are being taken to fight a devastating disease

A fungus poses major risks to the world’s banana production and could cause vast commercial losses and even greater damage to the livelihoods of the 400 million people who rely on the world’s most traded fruit as a staple food or source of income.

FAO and its partners Bioversity International, the International Institute of Tropical Agriculture and the World Banana Forum have launched a global programme requiring $98 million to contain and manage a new strain – Tropical Race 4 (TR4) – of Fusarium wilt, an insidious disease that can last for years in soils and can hitchhike to new fields and destinations through a number of means such as infected planting materials, water, shoes, farm tools and vehicles.

“This is a major threat to banana production in several regions of the world. We need to move quickly to prevent its further spread from where it is right now and to support already affected countries in their efforts to cope with the disease. The long term resilience of banana production systems can only be improved through continuous monitoring, robust containment strategies, strengthening national capacities and enhancing international collaboration to deploy integrated disease management approaches,” said Hans Dreyer, Director of FAO’s Plant Production and Protection Division.

Fusarium wilt TR4 was first detected in Southeast Asia in the 1990s and has now been identified at 19 sites in 10 countries, including the Near East, South Asia and Mozambique in sub-Saharan Africa.

The global programme is initially targeting 67 countries in a bid to prevent its spread and management. Without a coordinated intervention, scientists estimate that the disease could affect up to 1.6 million hectares of current banana lands by 2040, representing one-sixth of current global production with an estimated annual value of USD $10 billion. The programme aims to reduce the potentially affected area by up to 60 per cent.

“There is also an important knowledge gap regarding the biology and management of the fungus and we aim to address these through this collaborative initiative, also promoting introduction of more biodiversity and improved agronomic practices into banana production systems” said Ann Tutwiler, the Director General of Bioversity International, speaking on her behalf and that of the IITA.

“The disease is also an important concern for the industry and the trade of this popular fruit,” added Pascal Liu, coordinator of the World Banana Forum.

The five-year programme is designed to build on existing initiatives tackling the disease and focuses on strengthening local technical capacities and supporting the development of science-based technologies and tools through research on biology and epidemiology of the fungus, its detection, surveillance, rapid containment actions, soil health and the development of resistant cultivars.

For areas where the disease is not present or first appears, inspection, surveillance and rapid response measures will be developed. Where it already occurs, improved and integrated disease management techniques will be developed along with the search for and deployment of resistant varieties. If effectively rolled out, it is estimated that every USD $1 invested in the programme today will produce benefits of between USD $98 and USD $196 in 20 years’ time.

What is Fusarium wilt TR4?

Part of the Fusarium oxysporum f.sp. cubense family, the disease is caused by a new variant of the fungus that had decimated banana plantations in the early 20th century, ultimately causing more than USD $2 billion in damages and leading to the replacement of the Gros Michel banana type with the Cavendish variety, which proved resistant to the earlier strain of the fungus but has now succumbed to the new race TR4.

The TR4 – which so far has impacted nearly 100,000 hectares according to estimations of scientists – particularly affects the Cavendish banana, which accounts for around half the bananas grown today, but also other cultivars that constitute key nutritional staples. Despite banana’s large role in global trade, around 85 percent of annual production is consumed locally.

Affected plants show yellowing leaves, which then collapse and form a skirt of debris around the lower part of the plant. The fungus can easily spread and remain viable in the soil for decades. This is why the phytosanitary standards provided by the International Plant Protection Convention are essential as the best approach by far in preventing the fungus from arriving in a new country or region.

When discovered, infested areas should be rapidly and properly fenced in, infected plants destroyed and further quarantine measures taken. Implementation of such measures will vary widely according to whether production systems are based on smallholder farming, mixed-cropping systems or monoculture plantations.