The head of the UN’s Food and Agriculture Organization (FAO) called for unity on illegal fishing which threatens marine ecosystems, food security and regional stability, and has led to estimated global losses of $23.5 billion annually. 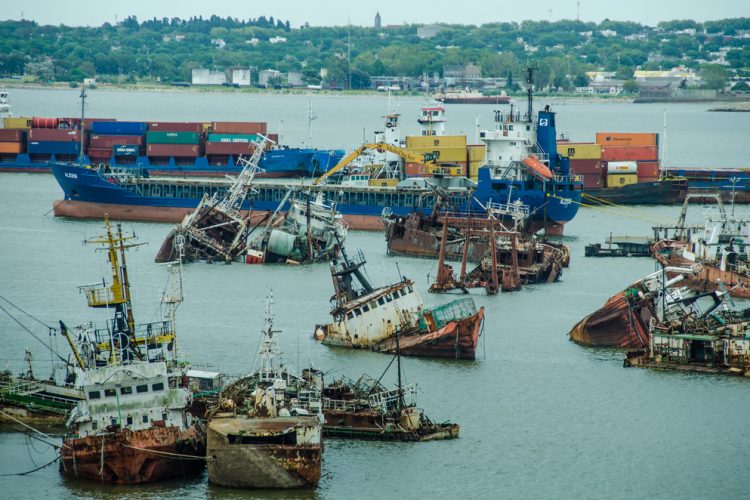 LEFT TO ROT: Illegal fishing boats captured in Uruguayan coastal waters are stranded in the ships' graveyard in the capital city’s harbour.

FAO Director-General José Graziano da Silva told attendees at the OurOcean Conference, hosted by the European Union in Malta, that every country should join the Port State Measures Agreement (PSMA) in order for it to work.

The pact, which was introduced in 2009, aimed to ‘prevent, deter and eliminate’ illegal, unreported and unregulated fishing through ‘robust’ state measures.

It was originally signed by 30 nations and the European Union on behalf of its 28 member states. But according to Mr Graziano da Silva, this is not enough.

“We need all countries around the world to be part of the PSMA for it to be highly effective,” he said in Malta. “We need many more.”

FAO is doubling down on its commitment to implement the PSMA, and has committed hefty budgetary resources of its own to support poorer countries develop the technical, scientific and legal capacity required. That should be seen as “seed money” to be increased by voluntary contributions, Graziano da Silva said.

The PSMA, which requires rigorous inspections of vessels by port rather than flag states, is the “main tool” to tackle illegal fishing and “also helps to tackle other serious problems such as the traffic of drugs and human beings,” he added.

Graziano da Silva also announced FAO pledges of $41.9 million in funding initiatives for programmes aimed at the fisheries sector, including improving fisheries management and livelihoods around the Mediterranean and the Black Sea.

“Healthy oceans are a vital condition for the successful implementation of the 2030 Agenda for Sustainable Development and are particularly crucial for some of the poorest communities in the world who rely on small-scale fishing activities,” Graziano da Silva said.

FAO’s longstanding contribution to the sustainable use of oceans, seas and marine resources – which provide animal protein for more than 3 billion people and are the base on which some 300 million people pursue their livelihoods –  has intensified in recent years with its introduction. Alongside the PSMA, FAO has mustered international approval of the Voluntary Guidelines for Securing Sustainable Small-Scale Fisheries in the Context of Food Security and Poverty Eradication.

Small-scale fisheries play a significant social, cultural and economic role around the Mediterranean and Black Sea regions, constituting more than 80 per cent of the official fishing fleet and a quarter of all fish landed. However, that role is at risk as 85 per cent of local fish stocks are now being fished at levels assessed as biologically unsustainable.

Graziano da Silva announced that FAO’s General Fisheries Commission for the Mediterranean (GFCM) is committing €20 million to help reverse the trend of overexploitation of fish stocks in the Mediterranean and the Black Sea and strengthen the livelihoods of coastal communities along their coasts.

FAO also reaffirmed its commitment to spend more than $1 million to assist Small Island Developing States through its Blue Growth Initiative, which is geared to providing developing countries with a framework allowing them to rebuild and grow their aquatic economies in a sustainable ecological manner while benefiting coastal communities.

A particular focus will be making sure that fish trade contributes towards hunger-eradication goals.