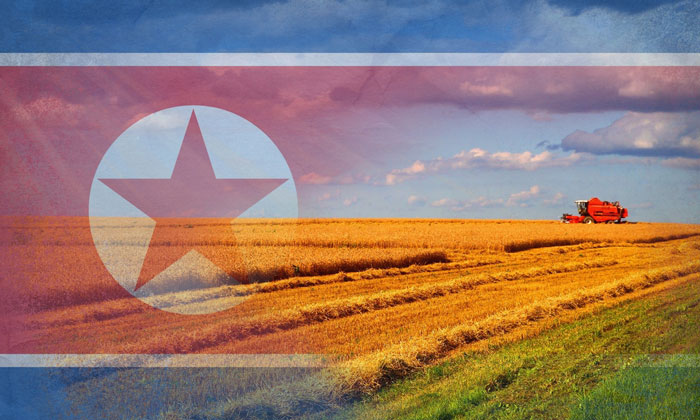 Crop production in the Democratic People’s Republic of Korea (DPR Korea) has been severely damaged by prolonged dry weather conditions, threatening food security for a large part of its population, according to a new Food and Agriculture Organisation of the United Nations (FAO) update prepared in collaboration with the European Commission’s Joint Research Centre (JRC).

Rainfall from April to June in key crop-producing areas in the DPR Korea were well below the long-term average, severely disrupting planting activities and damaging the 2017 main season crops, including staple rice, maize, potatoes and soybeans.

“So far, seasonal rainfall in main cereal producing areas have been below the level of 2001, when cereal production dropped to the unprecedented level of only two million tonnes, causing a sharp deterioration in food security conditions of a large part of the population” said Vincent Martin, FAO Representative in China and DPR Korea.

“The impact of the delay in the monsoon onset is aggravated by the low availability of irrigation water. The water reservoirs in the main agricultural provinces were at rather low levels at the beginning of July”, said François Kayitakire, who led the JRC contribution to the report.

The JRC provided rainfall data and analysed crop and vegetation conditions using satellite images. The JRC also analysed the situation of irrigation water reservoirs based on remote sensing data. Scientists at the JRC have been monitoring crop performance in the DPR Korea for more than 10 years.

Despite the fact that the early season harvest accounts for only 10% of the total annual cereal production, these crops are an important source of food during the lean season from May to September.

Concerns over the 2017 main season crops

Although rains in the first half of July provided some relief, they were generally too late to allow for the normal planting and development of the 2017 main season crops, to be harvested in October-November.

The lack of rain is expected to have a serious impact on main season crops in the major cereal-producing areas, including the provinces of South and North Pyongan, South and North Hwanghae and Nampo City, which normally account for close to two-thirds of overall main season cereal production.

With forecasts of reduced production of the 2017 main season crop, the food security situation is expected to further deteriorate during the 2017-18 marketing year, and cereal import requirements are likely to increase.

“Immediate interventions are needed to support affected farmers and prevent undesirable coping strategies for the most vulnerable, such as reducing daily food intakes,” said Martin. “It is critical now that farmers receive appropriate and timely agricultural assistance, including irrigation equipment and machinery.”

According to the report, it is also essential to immediately start rehabilitating and upgrading irrigation schemes to reduce water losses and increase water availability.

Increased food imports (commercial or through food aid) would be required during the next three months at the peak of the lean season, ensuring adequate food supply for the most vulnerable, including children and the elderly.

The FAO also recommended the promotion of drought-tolerant crops and varieties and the diversification of livelihoods to increase the resilience of farmers and households to natural disasters and climate change.