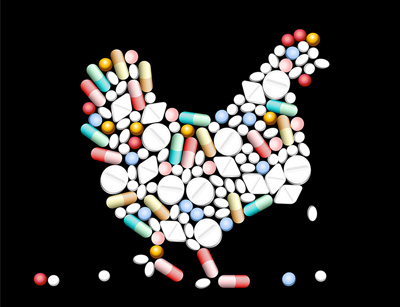 Helena Semedo, Deputy Director-General of the Food and Agricultural Organization of the United Nations (FAO), has said that antimicrobial resistance is an emerging public health threat requiring a globally coordinated effort to counter the risks it poses to food security. Overuse and misuse of antibiotics and other antimicrobial agents foster increasing resistance among the very microbes that cause the infections and disease they were designed to quell, threatening to reverse a century of progress in human and animal health, she said.

“We have to help save live-saving drugs,” she told European ministers of health and agriculture at a conference on antimicrobial resistance in Amsterdam on Wednesday.

Aside from the human health considerations, the emergence of microbes resistant to antibiotics and other pharmaceutical agents puts animal health at risk and consequently has an impact on rural livelihoods and food security.

FAO’s governing Conference in 2015 called for urgent action at both the national and international levels to respond to the growing threat of drug-resistant pathogens in the world’s food producing systems. While resistance develops as part of natural adaptation, it is exacerbated by inappropriate use of pharmaceuticals, and the prevalence of resistance in the agricultural sector is generally higher in animal species reared under intensive production systems.

Antimicrobial resistance is a tendency organisms – often bacteria, but also fungi and parasites – have to adapt to drugs designed to eliminate them. Use of such agents extends beyond humans and other animal species; for example, oxytetracycline, a common antibiotic, is currently used in orange trees as the use of pesticides wanes.

Solutions for antimicrobial resistance must be found, Semedo said.

“How can we eliminate hunger or improve sustainability when we cannot cure sick animals?” she asked. “How can we reduce rural poverty when the drugs given to ill farm workers and their families no longer have effect?”

To help combat antimicrobial resistance and deliver on its core strategic objectives, FAO is engaged on multiple fronts. It works closely with the World Health Organization and the World Organisation for Animal Health as well as on the global level through the food safety guidelines of the Codex Alimentarius and through targeted field programmes in dozens of countries on all continents.

While applauding Europe’s interest in the cause and hailing the Netherlands in particular for its slashing the amount of drugs used in its prosperous livestock sector by almost 60 percent in recent years, “the real challenge for us is to translate such efforts to countries in need with poor resources,” Semedo noted. “The risk of antimicrobial resistance appears to be particularly high in countries where legislation, surveillance, prevention and monitoring of antimicrobial resistance are weak or inadequate.”

Although the Organization favours prudent regulations and measures to control the influx of medicines and reduce their use, it also notes that many rural smallholders and pastoralists often face difficult economic choices and that counterfeit drugs are rampant. Broad improvements in hygiene, disease prevention, veterinary oversight and accurate and affordable diagnostics, as well as ensuring quality nutrition to improve the overall health of livestock and fish through safe feed and suitable breeds are critical in reducing overuse of antibiotics.