Why does dipping chopsticks in oil tell cooks the temperature of oil in a pan? A team of international researcher set out on a mission to find out. 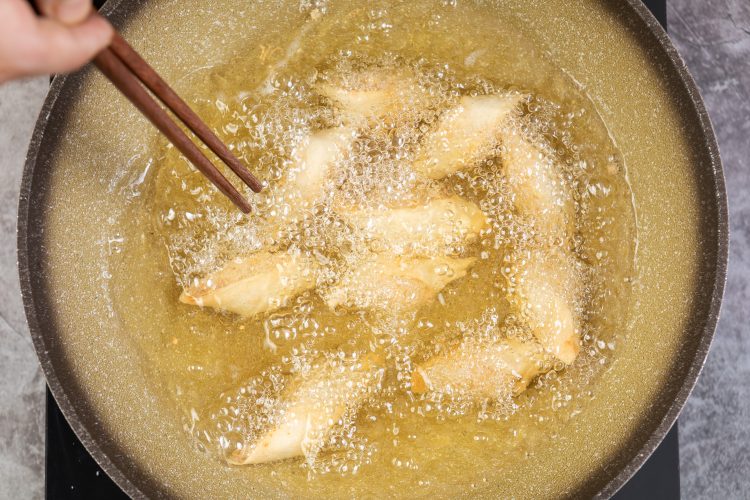 Cooks throughout Asia put moist bamboo chopsticks into oil in a frying pan, watching the bubbles that form and listening to the sizzling sound they make as they burst to gauge the perfect cooking temperature.

The physics of the technique that has been passed down from chef to chef and family to family have now been uncovered by a team of international researchers.

“Many cookbooks teach this technique and it is widely used, but when we searched the academic literature, we couldn’t find any detailed scientific explanations,” said Zhao Pan, a mechanical and mechatronics engineering professor at the University of Waterloo. “We set out to provide one.”

“Members of our team speak seven different languages, but we couldn’t find any scientific investigation, and no one knows the history of the trick,” added lead author Akihito Kiyama of Utah State University.

The researchers said they found the physics of frying food far more complex than they anticipated. To simplify their tests, they used moist pieces of paper and, later, water droplets as stand-ins for actual food.

“We found three distinct types of bubble events in our experiments: an explosion cavity, an elongated cavity and an oscillating cavity,” said Tadd Truscott, a professor at King Abdullah University of Science and Technology in Saudi Arabia.

Explosion cavities form when a water droplet enters hot oil and undergoes a micro-explosion due to the sudden temperature increase, forming a vapour bubble that can rupture the surface of the oil. Elongated cavities explode without rupturing the surface, while oscillating cavities are created when a water droplet is submerged, undergoes a multi-step explosion process and begins to oscillate before breaking up into numerous small bubbles.

The results have potential applications in scientific fields such as acoustic sensing of aerosol generation to inexpensively measure air pollution, new technology the researchers are now working on.

Pan, director of the Pan-Lab: An Interdisciplinary Kitchen for Fluid Physics at Waterloo, said the tests also showed that the trick used by deep-frying cooks works quite well.

“This simple eye and ear measurement is accurate to within about five to 10 per cent, which is pretty good when we consider that a typical temperature for frying food is higher than 150 degrees Celsius,” Pan said.