Mitigation of greenhouse gases in dairy cattle through genetic selection

A study has set targets to reduce methane production by dairy cattle by 20 percent in 10 years through selective breeding. 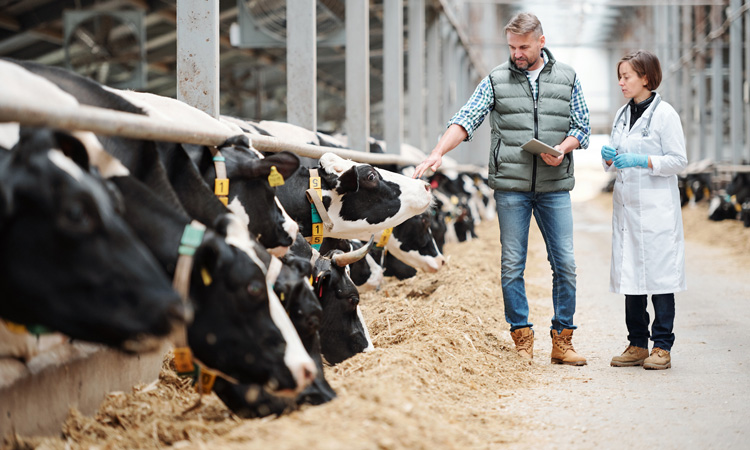 Researchers in Spain have proposed mitigating methane production by dairy cattle through breeding. In an article appearing in the Journal of Dairy Science, scientists have targeted reduction of enteric methane in the breeding objectives for dairy cattle to select animals that use feed more efficiently and thus produce less methane. Because livestock farming contributes 13 percent of global greenhouse gas (GHG) emissions, selective breeding can reduce those emissions while increasing milk output, according to the research.

Methane from enteric fermentation is considered the main GHG coming from ruminants, contributing to global warming and a loss of dietary energy in ruminants. “Current selection pressure is increasing total methane production in the population of dairy cows but is reducing intensity (per kilogram of milk) due to higher productive levels of each cow. A reduction of methane in the breeding goals should also be included in the selection indices,” said lead author Oscar González-Recio, PhD, Department of Animal Breeding, National Institute for Agricultural and Food Research and Technology (INIA), Madrid, Spain.

Evaluation of the genetic traits and economic response of the traits in the selection index were considered in this study that used genetic parameters estimated with 4,540 records from 1,501 cows. While methane production is necessary to maintain rumen homeostasis, total emissions are expected to decrease four to six percent in 10 years due to increased milk production per cow, the researchers explained. If annual methane production per cow is included in breeding goals and ad hoc weights are placed on methane production, the researchers said GHG emission from cattle could be reduced by 20 percent in 10 years.

“Increasing per-cow productivity may reduce the number of cows needed per billion kilograms of milk produced, contributing to mitigation of GHG emissions, but this is not enough. If no action is taken, the genetic potential for methane production is expected to increase,” Dr González-Recio added.

While the biological limit of methane production remains unknown, the study has highlighted the potential for including environmental traits in selection indices while retaining populations of cows that are profitable for producers.

National Institute for Agricultural and Food Research and Technology (INIA)

National Institute for Agricultural and Food Research and Technology (INIA)