Vittorio Silano, esteemed Italian academic, reviews the EFSA methodology for safety assessment of botanicals and botanical preparations intended for use as ingredients in food supplements… 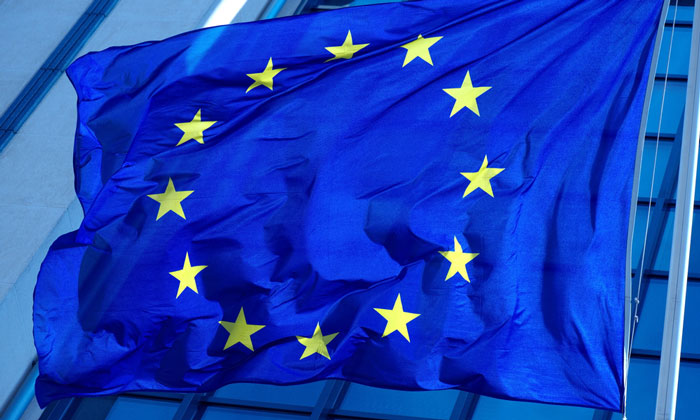 The methodology developed by the European Food Safety Authority (EFSA) Scientific Committee to assess the safety of botanical ingredients in food supplements is based on the history of safe use in case evidence exists that the historical level of safe human exposure to the botanical ingredient is not exceeded and that no substances of concern have been identified as naturally-occurring in the botanical ingredient under consideration. In case substances of concern have been identified in the botanical ingredient, as indicated by the EFSA Compendium of Botanicals or EFSA chemical hazard database or other available information sources, the safety of the overall exposure to such substances should be evaluated in the context of available health-based guidance values such as Acceptable Daily Intakes (ADI) or Temporary Daily Intakes (TDI).

If no such health-based guidance values are available or in case of natural occurrence in the botanical ingredient of genotoxic and/or carcinogenic substances, the so-called “Margin of exposure” (MOE) and “Threshold of Toxicological Concern” (TTC) approaches can be applied covering the botanical ingredient(s) under consideration and any other dietary sources of exposure.  In case the historical levels of safe human exposure are likely to be exceeded by the use of a food supplement botanical ingredient or no history of safe food use is available, additional short-term toxicity data such as those on toxicokinetic, genotoxicity and sub-chronic toxicity  make possible to evaluate the safety of the botanical ingredient or clearly indicate the need for long term toxicity data.. Since the adoption of the above-mentioned safety assessment methodology in 2009, EFSA is intensively working to increase the availability of data on naturally-occurring substances of concern in botanical species.

The development of a harmonised procedure for safety evaluation of botanical ingredients intended for the manufacturing of food supplements was identified as a priority issue for EFSA shortly after its inception. In fact, according to the European Regulation 2002/46, the safety evaluation of botanical ingredients widely used for manufacturing food supplements is a responsibility of food manufactures/importers, under the supervision of competent authorities in Member States. This safety evaluation was carried out with non-harmonised methodologies essentially based on long term history of safe use in spite of the significant limitations of such an approach especially in detecting long term adverse health effects. The other main issue complicating the evaluation of safety of botanical products was the natural occurrence in different plant parts (e.g. roots and leaves)  of secondary metabolites initially synthesised by the plant as a protection against parasites and well known to include toxic, addictive, psychotropic and other substances of concern (e.g. alkaloids, cyano-genetic glycosides or sesquiterpene lactones).

Moreover, additional uncertainties on the  naturally-occurring substances of concern were due to factors such as cultivation and harvesting modalities as well as other treatments and the manufacturing methodology of the botanical preparations. The fact that the market of botanical food supplements was constantly growing with new categories of products and the globalisation of trade promoting the availability of a number of  botanical species other than those cultivated locally and prevalently used in the past in different regions was also further complicating the safety assessment based on the history of safe use. Therefore, EFSA decided, with the support of the EU Member States, to self-task a specific activity in this domain to assist  Member States in their responsibility of ensuring safety of the many botanical ingredients widely present in their markets. To this end, an ad hoc working group of the EFSA Scientific Committee was established in 2005. Moreover, since then, EFSA has been deeply committed to increase the availability of data on substances of  concern naturally occurring in botanical species.

The technical data needed to assess safety of botanicals  and botanical preparations are summarised in Tables 1 to 3, whereas the exposure data are summarised in Table 4. As explained in the next section, the toxicological data needed depend on whether: a safe history of use exists for  known exposure levels including those associated with a well defined botanical ingredient; and (ii) substance(s) of concern are known to be naturally-occurring in the botanical  ingredient considered.

The proposed framework to assess safety of botanicals  and botanical preparations

Two general frameworks  were proposed for assessing safety of botanicals and botanical preparations used as ingredients in botanical food supplements:

Level A- Safety assessment based on available knowledge (see Section 3.1); 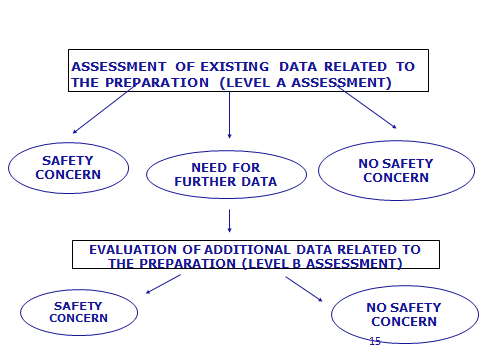 3.1. Safety assessment based on available knowledge in case the anticipated human exposure level is significantly lower than the safe history of use level

3.1.1. Substances of concern are not known to occur in the botanical species or botanical preparation

In case a long term (e.g. 25-30 years) history of safe use as a food exists for defined exposure levels of a well characterised botanical  ingredient  in known population groups, the available data are sufficient to conclude for the safety of the specific botanical ingredient under consideration in case they clearly indicate that no significant increase of  the intake compared to historical levels is to be expected due to intended levels of use in food supplements and no naturally-occurring substances of concern are present in the ingredient.

3.1.2. Substances of concern are known to occur in the botanical  ingredient

In case one or more substance(s) of concern is (are) known to be present in the botanical ingredient under consideration, the significance of overall exposure(s) to such substance(s) should be evaluated and compared with existing health-based  guidance values such as ADI or TDI. . For any matrix effect advocated, testing and other data should be provided to demonstrate the occurrence of the matrix effect of the preparation and its magnitude.

If no health-based guidance value are available  or in case of presence of  substances of concern that are genotoxic and/or carcinogenic, the so-called “Margin of exposure” (MOE) and “Threshold of Toxicological Concern” (TTC) approaches can be applied.

Additional short-term data required for the level B assessment include:

–    Possible interactions among constituents of the botanical or botanical preparation that can alter bioavailability, metabolism, and toxicity.

-In vitro tests covering effects both at gene and chromosome levels are required. A positive in vitro test normally requires follow-up by in vivo testing.

-Minimum requirement to establish a NOAEL:  90-day study in the rat with the test material administered via the diet.

– Depending on the outcome of genotoxicity and subchronic studies  safety of the botanical preparation may be assessed or further studies may be identified as necessary for safety assessment (e.g. reproductive toxicity).

The  importance  of  identifying the substances of concern naturally-occurring in specific botanicals and botanical preparations  in order to assess their safety as food supplements motivated EFSA  to take strong initiatives to this end.

In April 2009, EFSA published on its website the first version of the  Compendium of botanical species reported to contain toxic, addictive, psychotropic or other substances of concern.

The purpose of the Compendium is to help risk assessors responsible for the evaluation of specific ingredients in food supplements, in more easily identifying the compound(s) of concern on which to focus the assessment (for the structure of the Compendium see Table 5).

Priority given to botanicals  in the preparation of the Compendium is based on information indicating species:

The Scientific Committee worked on a second version of that Compendium between January 2010 and February 2012, considering botanicals that appear on a negative list or subject to restricted use (e.g. maximum level or certain parts allowed only) in at least one European Member State. About 900 new entries have been included in the second version of the Compendium. Two annexes have been added compared to the first version: the first one lists botanicals for which not enough information on possible substances of concern could be found, or for which the information present could not be verified; the second one lists botanicals for which, although some data were available, the Scientific Committee could not identify substances of concern, or other reasons for the inclusion in the compendium.

Between 2012 and 2017,  the EFSA has worked intensively to further expand the Compendium and has added:

(i) 700 botanical species still pending for review for possible inclusion in the Compendium;

The third version of the Compendium, that will include about 3000 botanical species, is expected to be finalised in early 2018.

On 5 July 2016 the European Food Safety Authority has released  the information  on the on-going project to  convert the Compendium in a data base format that contain naturally-occurring substances of concern for human health, searchable on the EFSA website and compatible with the EFSA chemical hazard database. The project is based on a computerised program for the identification and selection  in the open scientific literature of references concerning a large number of botanical species which are likely to report on compositional data or adverse human/animal health effect data and make available the abstract and, when possible, the full text of each reference. The scientific articles selected by the computerised program are, then, scrutinised by an EFSA expert group to identify the botanical species in which substances belonging to previously defined chemical groups of concern or to classify the substances which, although not belonging to a chemical group of concern, are characterised  by toxicity data.

EFSA (2009) “Guidance on safety assessment of botanicals and botanical preparations intended for use as ingredients in food supplements”  EFSA Journal ,7(9)1249). 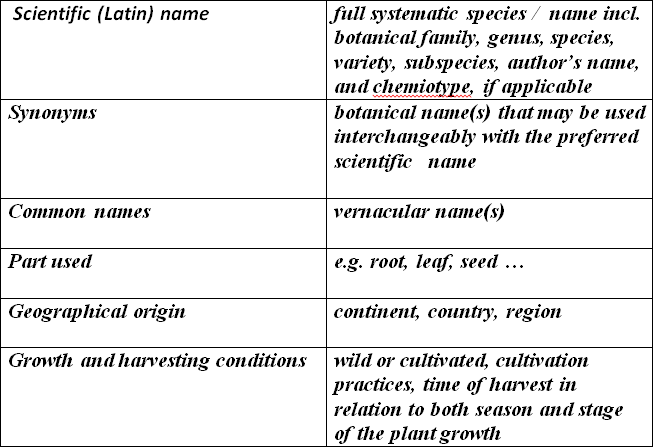 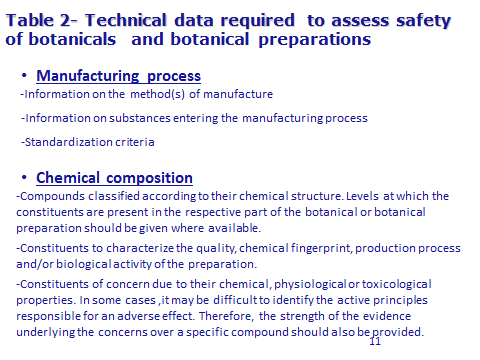 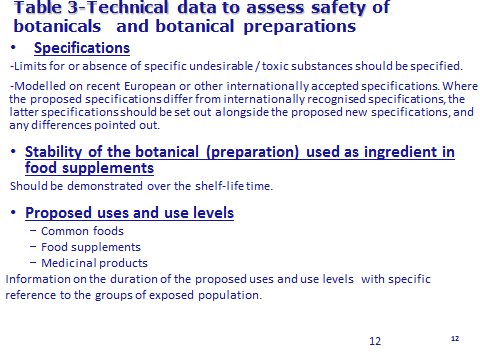 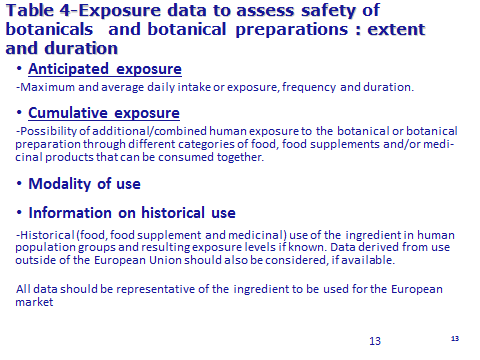 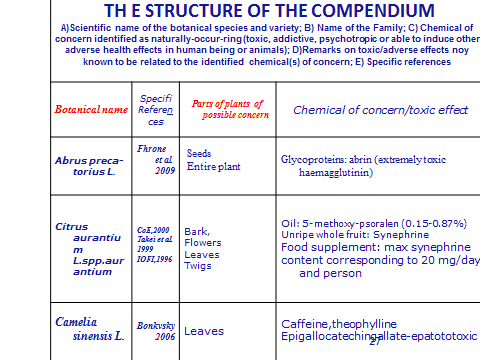 Are you concerned as to how Brexit may affect both European and International trade and regulation? 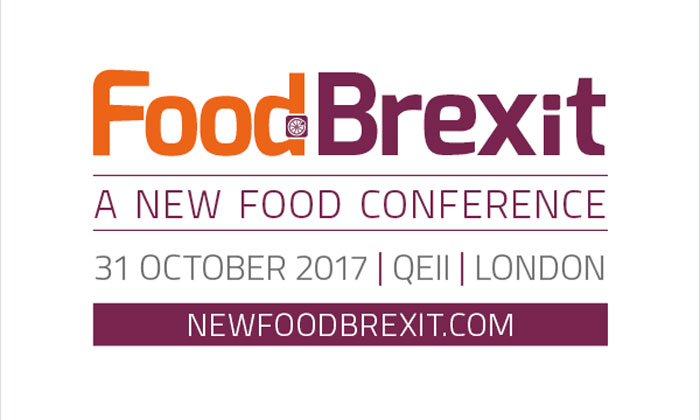