There are several sights and smells that you associate with a butcher’s shop. The white tiled walls, glass display cabinets and chalk board displays are equally present at Rudy’s – the only thing missing is meat. 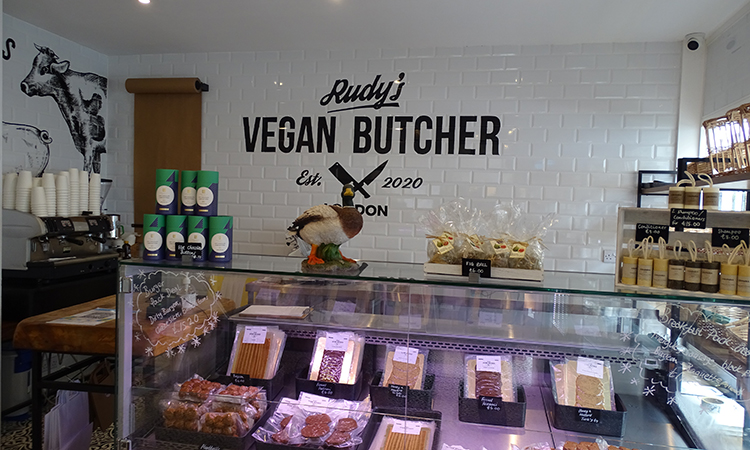 Rudy's opened in Islington in 2020

Rudy’s Vegan Butcher opened in the North London borough of Islington in 2020, alongside its vegan diner next door, which serves everything from Dirty Dogz (made from seitan) to Pulled Porc.

“We started seeing a big interest from customers as to what was inside the burgers and sandwiches – people asking, ‘Oh, do you sell them in the store?’” explained Danai Davatzis, Community Manager at Rudy’s Vegan.

“So, something started working in the back of our minds – there was an interest. People really want to do this at home. With the whole pandemic, it just made total sense for people to be able to buy the pastrami, buy the Baycon, buy the Ribz and be able to cook them at home.

“Initially, we came up with some DIY kits to gauge their success with customers. Then, when we saw the response, we were confident it was something that people would enjoy long term.”

Many of you will have read the words “vegan” and “butcher” alongside each other and had to take a second look. You’d be forgiven too, as the term is an immediate contradiction. The English term “Butcher’s”, or perhaps more accurately “Butcher’s Shop”, is exactly that. It’s a place where someone skilled in the art of butchering animal carcasses prepares and sells meat. The term would be no less confusing in Spanish (‘carnicería’) or German (‘metzgerei’) – both translating roughly to a ‘meatery’. The name of a premises where meat is prepared and sold seems fairly fixed.

As Davatzis admitted, naming Rudy’s Vegan Butcher’s as such was a risk – but is it paying off? “It was a courageous jump because the name Vegan Butcher can work really well, but it can also work against the odds because it’s a butcher – but it’s not a butcher! So, I think we took the brave step of trying and then if it didn’t work, it didn’t work. But it is working. People are loving it and they have a really good reaction to it,” she said.

The contradictions don’t end with the sign above the door either. Take one step inside Rudy’s and you could well be inside a traditional butcher’s. The white tiling is familiar, as are the wooden chopping boards behind the glass-fronted display counter where the wholly vegan products are laid out just as they might be at nearby Smithfield market.

But all of that is deliberate, as Davatzis explained. “We’re bringing you an experience. When you walk through the door, we want you to feel like becoming vegan doesn’t mean that you need to give up your rituals of visiting the grocery  stores. You can still have that experience without harming any animals, reducing your carbon footprint and helping the planet. We’re all human. We all want to carry on with our rituals. So, the reason we call it the Vegan Butcher is because we wanted to keep it as an experience.

“We know that some people are going to ask ‘why call it a butcher’s?’. But we’re not harming any animals – it’s just the name. We could have called it a Vegan Deli. It’s just the name – we like it and we hope many others will like it as well. Once you explain that it’s about giving options, people understand,” she added.

Who to aim for?

That word ‘options’ is perhaps the most crucial aspect to the Rudys story. If we want people to switch out their bacon sandwich for a Baycon sandwich, it befits the cause to offer a wide variety of options. It strikes some as odd that plant-based alternatives exist at all – a common question being  ‘why would you want to eat a product that looks like bacon if you are opposed to the slaughtering of pigs?’.

This may be true for some consumers, but for many the option to partake in a barbecue with friends with similar-looking food (a concept which could explain the growth in low and no alcoholic beverages), or switch out some breakfast favourites for familiar-looking plant-based alternatives, is important.

“The reason we create products that mimic the appearance of meat is because it might make that step from meat eater to non-meat eater easier,” explained Davatzis.

“For example, we had a very interesting response with the barbecue box, because we took some pictures of the ribs on the grill, but there were some people that almost unfollowed us on social media before they realised it was all vegan! That’s exactly what we’re trying to do. We’re recreating something that doesn’t do any harm, and tastes really freaking good!”

Aiming for both steadfast vegans, as well as flexitarians and even firm meat eaters wanting to try something different, is clearly important to Rudy’s as a business. “I think people feel intimidated entering the vegan community,” said Davatzis.

“It’s a very sensitive entrance, because when you’re vegan, you’re so aware of certain things that are happening; you’re aware of what goes in your body. You’re aware of why becoming vegan is such an impactful choice.

“But I think also, being on the other side of the spectrum, it can be intimidating because people think they will have to learn so much information. For example, when I first became vegan, I remember that I had to switch from certain cereals to other cereals because they contain honey and I didn’t think it through.

“We’re giving you the tools to understand what’s vegan, and what’s not. We’re giving you the tools to take this move slowly. It doesn’t have to be so aggressive and everyone needs to feel welcomed. And that’s why, well, we don’t want to restrict our community to just vegans. We want to be able to welcome people that may not be vegan, but want to try vegan today and be surprised. Maybe it just flicks a switch in your brain to think ‘I can do this in the long run’.” 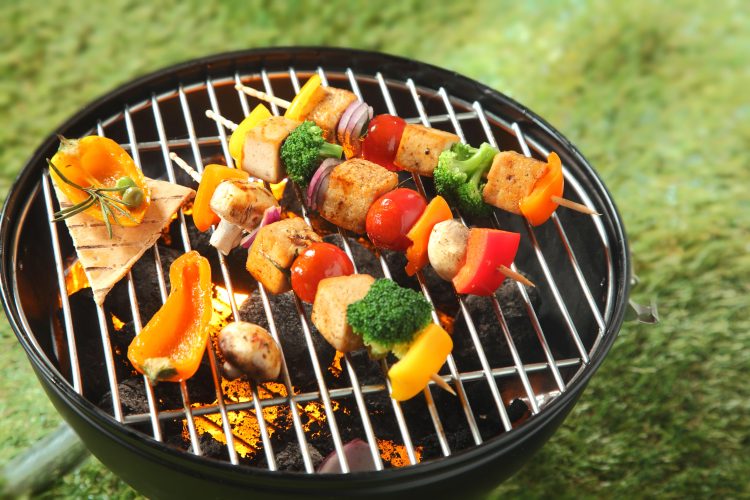 Learning from the community

A criticism levelled at many plant-based alternatives, including by this writer, is cost. For many families, buying plant-based alternatives for five or six mouths is not always feasible – an issue we discussed at length in one of our recent episodes of Food to Go. Of course, pricing plant-based products is always tricky when the consumer base is much smaller than that of its meaty counterparts. Put simply, if more people buy vegan sausages, they will get cheaper.

It’s an issue that Rudy’s was all too aware of, and Davatzis explained that the business would be looking to its community for feedback on aspects such as price. “Obviously, we’re very new,” she explained, “so we’re still trying to figure out how to price things while keeping them accessible.

“Using all-natural products can be a little more expensive. We’re still trying to find out what the market is demanding and what they are willing to spend.

“As a community manager, I’m always working side-by-side with our team to tell them about the response from our followers or the website.“If our community, at some point, says ‘this is very expensive’, then we will have a look and see what we can do to change that and make it better.”

One-off gimmick or here to stay?

There will be many that see Rudy’s Vegan Butcher’s as a gimmick – a one off that may do well because of that very fact, but is unlikely to set a trend.

The jury is still out on this, yet its recent expansion into world-famous department store Selfridges suggests there is an appetite for what Rudy’s is offering. If we are to reduce our reliance on meat, then it is imperative to entice meat eaters to try something new and, most importantly, plant-based. If familiarity is the key to achieving that, then clearly Rudy’s is on to something.

The choice for a completely meat-free retailer to adopt the characteristics of a shop that has sold meat for decades, maybe even centuries, will probably continue to be questioned. It’s an interesting sensory experience that sets it apart from competitors. The reaction of the butchery sector will be interesting – particularly if Rudy’s inspires the emergence of other vegan butchers’ – as it may claim the unfair use of a name associated with a  well-respected historic trade.

Ultimately though it’s unlikely to harm the trade of traditional butcher’s shops, which will continue to provide their expertise and skill for those shopping for a Sunday joint of beef. But what if the familiarity of both the shopping experience and the products on sale inspires a few more people to give plant-based a go? Is that such a bad thing?