The power of cassava in the plant-based movement

Here, New Food hears from five experts about the opportunities and challenges of a plant-based diet, as they present a case study on cassava leaves and the ingredient’s untapped potential. 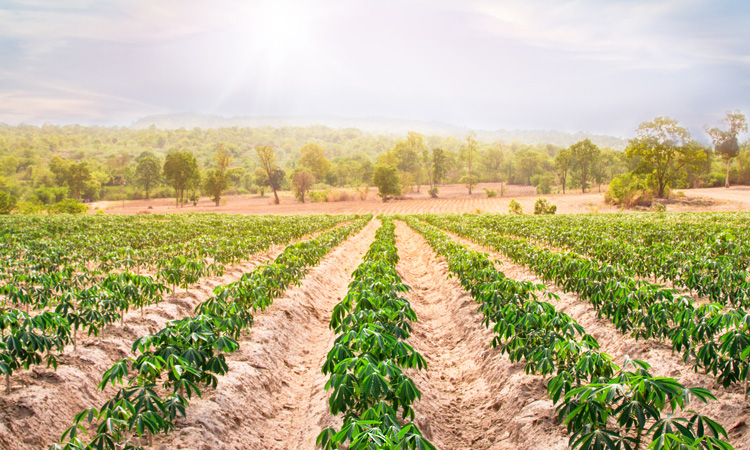 A steady reduction of conventional animal-based diets is already happening amid grave concerns about the negative impact of global warming. In comparison to animal-based diets, plant-based diets are associated with better utilisation of primary resources, producing fewer CO2 emissions in the course of their production and using less damaging environmental practices. However, obtaining a significant amount of the nutrients contained in agricultural commodities is not always easy, for numerous reasons.

We will use cassava leaves as a case study to exemplify how naturally occurring toxic and anti‑nutrient compounds have prevented us – until now – from accessing this hugely untapped resource of millions of tonnes of proteins, dietary and prebiotic fibres, provitamin A carotenoids and B1, B2, B3 and C vitamins.1-3

Cassava farming plays an important role, both in terms of food security and as a commercial crop, and provides useful opportunities for sustaining the livelihoods of millions of farmers in 105 tropical and subtropical countries.1-3 Its plantation is low maintenance in terms of water and soil requirements, as well as the time, labour and money investment it requires, which renders it an excellent candidate for poor areas with extended drought periods.1,4

We were fortunate enough to reach the proof of concept.

According to Food and Agriculture Organization Corporate Statistical Database (FAOSTAT) 2017 data, Nigeria is the top producer of cassava roots in the world with a production figure of 59.5 million tonnes that corresponds to 20 percent of global production. Ghana is also a significant player, producing 18.5 million tonnes of cassava roots, which equates to six percent of global production. Although cassava is mainly cultivated for its starchy roots, its leaves are also edible after necessary treatments and are used in local dishes in Africa as a good source of protein and micronutrients, albeit still named the “poor man’s food”.4 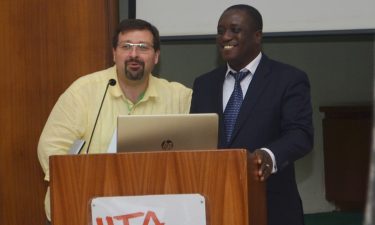 Cassava leaves have a high protein content, reaching up to 38 percent dry matter, and a well‑balanced amino acid profile. Depending on the cultivar, the crude dietary fibre content in cassava leaves can reach up to 20 percent of their dry weight, exceeding by a factor of two that of the roots. The leaves are also rich in vitamins such as B1, B2, B3, C, provitamin A carotenoids (pVACs) and minerals, which, alongside the protein, could be better utilised to help alleviate malnutrition and reduce stunting – ie, chronically malnourished populations in developing markets. Decreasing stunting has been set as the second Sustainable Development Goal of the United Nations (UN) and represents a major challenge in sub-Saharan Africa together with vitamins A and B deficiency.

Vitamin A deficiency, primarily affecting children and women, causes impaired vision, diminishes the ability to fight infections, and decreases growth rate and bone development – even leading to child fatalities in severe cases. In developing countries, plants are the major source of vitamin A in the form of pVACs, which demonstrate very poor absorption due to being trapped within plant cell organelles and cell walls. The bioavailability of pVACs can be enhanced up to six times during processing (eg, mechanical homogenisation) while the concept of using pVACs as an added food ingredient benefits their bioaccessibity up to one order of magnitude.5

Improving processed food composition by including higher amounts of protein, dietary and prebiotic fibre and other valuable ingredients is in line with modern nutritional guidelines. For instance, consumption of dietary fibres (DF) has been linked to a decreased risk for numerous health disorders including cardiovascular disease, type II diabetes, constipation, and is believed to provide a satiating effect.6-8

Cassava leaves have a high protein content, reaching up to 38 percent dry matter.

Despite the benefits of a DF-rich diet, the recommended intake (20-35g/day)9 is rarely met for the vast majority of the general population, particularly in developed markets. Therefore, inclusion of DF ingredients in processed foods could serve as an alternative means of increasing the dietary fibre consumption of the general population. However, increasing the content of DFs, proteins, or indeed, any other valuable ingredients, represents a considerable product formulation cost challenge for the food industry. It follows that cost-effective extraction and purification of valuable food ingredients from cassava leaves can be very useful for improving the composition of commercial food formulations in developed and developing markets alike.

Cassava leaves have the same yield in terms of fresh material as the roots, so yearly global leaf production can be estimated at close to 300 million tonnes. In contrast, the estimated volume of consumed leaves is less than one million tonnes per annum.1 This is easily understandable since the majority of leaf consumption is for domestic use only and takes place following a rather lengthy domestic detoxification process that involves pounding or grinding followed by lengthy heating. Regrettably, there is no practical industrial exploitation of cassava leaves, either as a legitimate agricultural product or a source of food ingredients. The prime cause for cassava leaves not being industrially valorised is the high toxicity of the leaves due to cyanogenic glucosides and, to a lesser extent, the existence of other anti‑nutritional components, such as phytate, oxalate and trypsin inhibitor.10,11

Cassava leaves contain high levels of cyanogenic glucosides (95 percent linamarin and five percent lotaustralin), which are located within the vacuoles of every cell and can be hydrolysed by linamarase based in the cell walls. Upon cellular disruption, linamarase generates glucose and acetone cyanohydrin, which are then decomposed to toxic volatile hydrogen cyanide (HCN).12

This last step can occur either spontaneously [pH>5 or temperature >35oC] or as a result of the enzymatic action of α-hydroxynitrilase, which is also cell wall bound.13,14 Hydrogen cyanide (HCN) is highly toxic to both humans and animals with ingestion of 50-100mg being known to cause fatalities.11 Diet-induced chronic toxicity is another main cause of concern, particularly for populations where cassava is a key staple. Konzo, Tropical Ataxic Neuropathy, exacerbation of goitre and cretinism are the most frequently reported cassava toxicity disorders.2,11 To prevent chronic toxicity a maximum limit of 10mg total HCN/Kg of cassava flour has been proposed by Codex since 1991.11 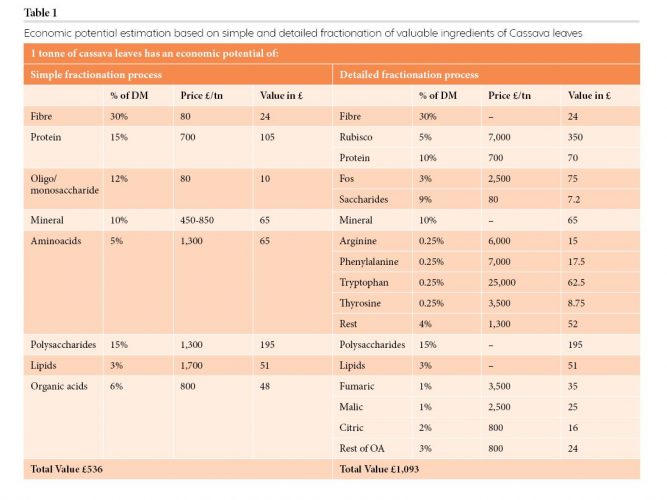 Furthermore, the conventional detoxification processes mentioned in the literature for cassava leaves are labour and energy intensive, thus it is not easy to industrially exploit the large quantity of leaves that goes to waste after harvesting. In addition, the residual toxic and anti-nutritional compounds left in the leaves render these approaches insufficiently effective and limit the exploitation of this potentially hugely beneficial resource. Consequently, there is a need for a greener and more effective detoxification approach to facilitate the industrial utilisation of cassava leaves.

Given our risk analysis, a significant part of any industrial process will entail preventing hydrogen cyanide emissions, thus ensuring that the leaf biomass does not pose a health and safety threat for the public and people involved with the transportation, storage and processing of high volumes of cassava leaves.

Guided by these thoughts and funded by a UoR‑GCRF (Global Challenges Research Fund) project, we were fortunate enough to reach the proof of concept for an industrial-based detoxification approach, which involves sun drying the cassava leaves at farm level to accomplish a first drying‑induced reduction in cyanide and preventing any further cyanide emissions. The dried leaves then get turned into a powder using industrial impact milling. The powder is reconstituted in water and the slurry’s pH kept between 3.5 and 4 for preventing unwanted reactions. Application of decanting and microfiltration leads to a wet spent leaf meal with non-detectable cyanide levels. Subsequent conventional drying then produces a leaf flour. 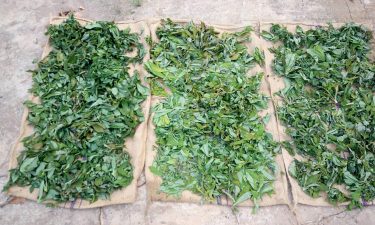 On the first day, delegates were presented with the detoxification breakthrough and contextual information relaying agricultural production and the nutritional benefits it offers, along with details about farming and the economy in sub‑Saharan Africa. On day two, delegates focused on selecting the best way forward for the industrial exploitation of the breakthrough.

Establishing a technically and financially viable process to generate Toxic-and-Antinutrient-Free Cassava Leaves (T&AfCL) food ingredients was seen as a top priority. A strong preference was expressed by the majority of delegates for T&AfCL food ingredients to come in the form of minimally refined flours/powders in order to minimise development time and refinement production costs of those ingredients. Delegates suggested that, given the abundance of cassava leaves and their low commercial price, such T&AfCL food ingredients could become a vehicle for promoting affordable nutrition across sub Saharan Africa.

We believe the way forward for cassava leaves, as well as other untapped plant-based resources, requires additional focus on developing technologies that could deliver detoxification and removal of anti-nutrient compounds. Addressing the poor absorption of nutrients from plant-based sources will require exploration of the relationship between plant tissue structure and nutrient release in the gut.

The authors wish to acknowledge the financial support of the “Converting cassava leaves into marketable food ingredients” UoR-GCRF project.

Dr Nikos Mavroudis is from the Department of Food and Nutritional Sciences at the University of Reading.

Dr Dimitris Balagiannis currently works at the Department of Food and Nutritional Sciences at the University of Reading.

Dr Francis Appiah is from the Department of Horticulture, Kwame Nkrumah University of Science and Technology, Kumasi, Ghana.

Prof Jeremy Spencer currently works in the Department of Food and Nutritional Sciences at the University of Reading.