How green is your ham and cheese? Study looks at the environmental impact of sandwiches

An all day breakfast runs up the same carbon tab as a 12-mile drive, but a home-made ham and cheese might be the way forward. 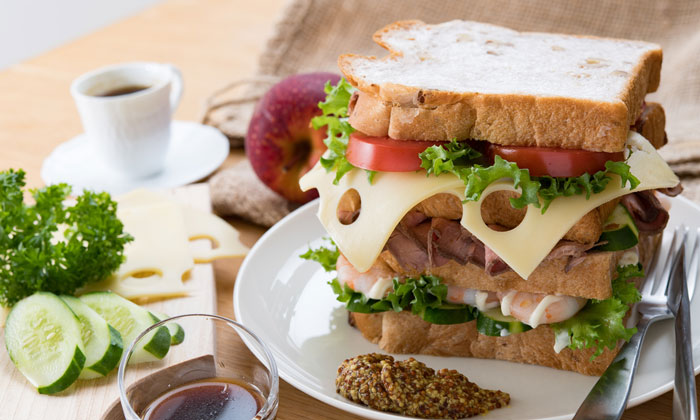 CARBON STACK: Making sandwiches at home can half their carbon footprint

The cumulative carbon footprint of food products is increasingly drawing the attention of researchers as they try to understand what impact modern food manufacturing and farming has on the environment. Now it is the turn of sandwiches to step on the scale.

Researchers at the University of Manchester have carried out the first ever study looking at the carbon footprint of sandwiches, both home-made and pre-packaged.

They found the most carbon-intensive was a ready-made ‘all-day breakfast’ sandwich which includes egg, bacon and sausage at 1441 grams of carbon dioxide equivalent – roughly the same as driving a car for 12 miles. The least was a home made ham and cheese.

In conducting their study, they considered the whole life cycle of sandwiches, including the production of ingredients, sandwiches and their packaging, as well as food waste discarded at home and elsewhere in the supply chain.

Altogether the team looked at 40 different sandwich types, recipes and combinations. They found the highest carbon footprints for the sandwiches with pork meat (bacon, ham or sausages) and those containing cheese or prawns.

Professor Adisa Azapagic, from the School of Chemical Engineering and Analytical Sciences, said: “Given that sandwiches are a staple of the British diet as well as their significant market share in the food sector, it is important to understand the contribution from this sector to the emissions of greenhouse gases.

“For example, consuming 11.5 billion sandwiches annually in the UK generates, on average, 9.5 million tonnes of CO2 eq., equivalent to the annual use of 8.6 million cars.’

The results show the largest contributor to a sandwich’s carbon footprint is the agricultural production and processing of their ingredients. Depending on the type, this can account for around 37 per cent – 67 per cent of CO2 eq. for ready-made sandwiches.

Keeping sandwiches chilled in supermarkets and shops also contributes to their carbon footprint. This can account for up to a quarter of their greenhouse gas emission equivalent.

Then there is the packaging material which comes in at up to 8.5 per cent and, finally, transporting materials and refrigerating sandwiches themselves adds a further 4 per cent.

Professor Azapagic, who also heads up the Sustainable Industrial Systems research group, added: “We need to change the labelling of food to increase the use-by date as these are usually quite conservative. Commercial sandwiches undergo rigorous shelf-life testing and are normally safe for consumption beyond the use-by date stated on the label.”