As the deadline looms, Consensus Action on Salt and Health has encouraged Public Health England to ‘get tough’ on food manufacturers who fail to meet the 2017 Salt Reduction targets. 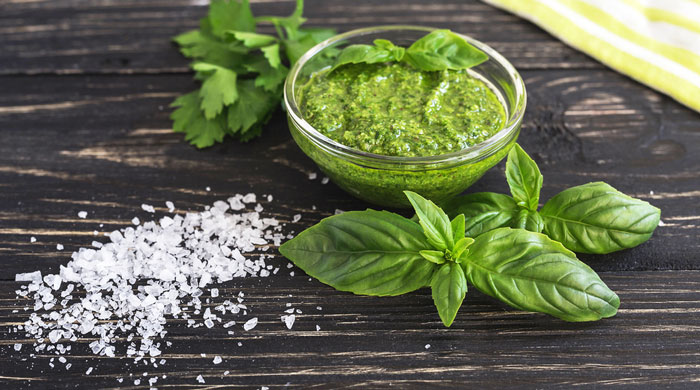 It may be green but that doesn’t mean it’s healthy. The salt content of pesto, and the somewhat lackadaisical efforts of those in the industry to reduce it, has earned the ire of a campaign group who have been bent on slashing salt for more than 20 years.

Consensus Action on Salt and Health (CASH), based at Queen Mary University of London, is calling on Public Health England (PHE) to be firmer with food manufacturers as, with just three months of the year to go, many are still failing to meet the 2017 Salt Reduction Targets.

A survey, conducted by the campaign group, using the app FoodSwitchUK, found that there is a huge variance in the salt content of supermarket-shelf pesto.

And Britain’s most popular brand just so happens to be the worst offender according to the CASH. Scala’s Italia Organic Vegetarian Pesto No. 5 Basil and Pesto No.1 Classic Basil both contain 3.3g salt per 100g. That is 30 per cent more briny than sea water and 2.5 times more than salted peanuts.

Customer awareness of the spice’s health ramifications does not seem to have deterred Scala as the amount contained in both bestsellers has actually risen by 32 and 18 per cent respectively.

Sarah Alderton, Assistant Nutritionist at CASH said: “Pesto is an everyday product eaten by adults and children alike, but people might not realise just how salty it can be! That’s why it’s important to check the label; switching from a high to lower salt option could really help to reduce your salt intake. However, given the inconsistent nature of food labelling this is difficult to do. None of the products we surveyed could be described as ‘healthy’, so consider having pesto in smaller portions, less frequently, or try other pasta sauces lower in salt and fat instead.”

Pesto falls in the ‘cook-in and pasta sauces, thick sauces and pastes’ category of PHE’s Salt Reduction Targets 2017 which was published in March.

It states that pesto and other thick sauces available on the market should on average contain 1.38g per 100g and a maximum of 1.63g. Fifteen, or 20 per cent, of the 75 brands examined exceeded the maximum and 30, or 40 per cent, exceeded the recommended average.

Dr Alison Tedstone, chief nutritionist at Public Health England, said: “Many popular foods can contain a surprising amount of salt. We’ve been very clear with the food industry on the importance of reducing salt and meeting the 2017 salt targets. Although consumption has reduced by 11%, industry cannot be complacent and PHE will report on their progress next year.”