At the moment, some sawmills treat sawdust as special waste, because it can’t be put to good use. Growing sawdust piles can even limit production. Risto Korpinen from Luke thinks that sawdust could be a part of the answer to the world’s need for food. 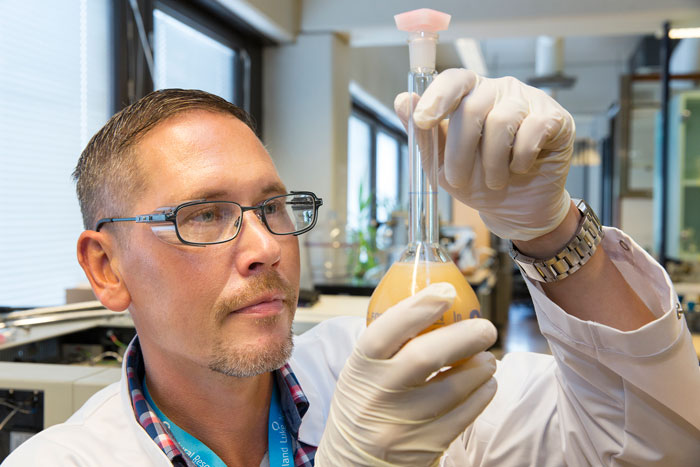 BITING THE SAWDUST: Dr Risto Korpinen hopes that in the future fish might be fed on sawdust

In 2050, there will be approximately two billion more people in need of food than today. Scarcity of nutrition will become increasingly common as the amount of arable land will decrease by 600 square metres per person. At the same time, Finnish sawmills are producing 3.3 million cubic metres of sawdust each year. Even though a large part of it is used for pulp and energy production, a substantial amount of it is piling up, unused and finally rotten.

World hunger and sawdust waste may seem like two separate issues, but Luke’s Research Scientist Risto Korpinen thinks they can be combined. Korpinen is leading a project called MonoCell – High-quality single cell protein for fish feed. The project’s title alone reveals quite a lot about its aim: to make high quality single-cell protein out of sawdust. The protein could later on be developed into fish feed.

“There has been a lot of discussion about the challenges that food production has to face in the future. That is also one of the reasons why I came up with this idea”, Korpinen said.

The idea of using wood as food is nothing new in Finland. In the years of the famine in the 19th century, Finnish people survived by making bread out of pine bark. The same emergency food was also eaten during the Finnish Civil War in 1918.

Against deforestation and extinction

According to Korpinen, it is clear that we cannot keep feeding soy and wild fish to the fish in our fish farms like we do today.

“The use of wild fish in feeding has led to the collapse of global fish stocks.”

At the same time, the soy industry is facing a lot of criticism. Soy plantations contribute to deforestation and require lots of arable land that could be used for planting food, not animal or fish feed.

“In Finland we use a lot of imported feed like soy. The industry is lacking a sustainable domestic option for fish feed”, Korpinen says.

Sawdust is a very familiar material to Korpinen. While he was a student at Åbo Akademi University in Turku, Finland, he wrote his master’s thesis about making cellulose out of sawdust. Now he has a doctoral degree in science in technology and thinks that sawdust is an ideal raw material for fish feed because it is not suitable to be eaten as such.

“We could do these same things with potato or corn starch too, but starch can also feed humans. In the US they make bioethanol out of starch, even though there are plenty of people in the world suffering from hunger. It just goes against my morals to use food in fuel production.” 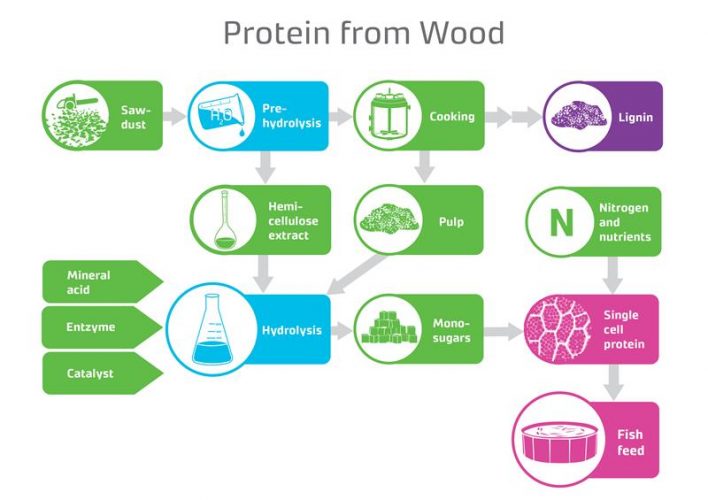 WOOD YOU LISTEN TO THIS: A flowchart detailing the process

The team benefits from their vast experience

The MonoCell project really got off the ground in August when the first experiments were conducted. Utilising sawdust in protein production is a sophisticated process that includes several stages.

The aim is for the research to be done during the autumn of 2017. The team consists of ten researchers from all over Finland. Korpinen will mainly be working on the first stages, as he is the lead researcher and the one conducting the initial experiments. Some of the procedures are fairly familiar to the research team as they have previously been used in other projects.

“Everyone in our team has their own task that reflects their expertise. We have food scientists and nutrition experts, for example. At the end, researcher Frans Silvenius will do a life cycle analysis that will tell us how much energy and chemicals have been used in the whole process.”

Korpinen believes that wood-based protein has a realistic chance of becoming a serious option for fish feed. Pulp mills have the right facilities to develop and use the MonoCell innovation and, thus, create new business for themselves.

“Mills could establish protein production units on their properties. They could benefit from the synergy by not just circulating the materials, water and chemicals but also energy, like electricity and steam”, Korpinen said.

The protein production would also provide an answer to a notable problem that sawmills in Finland have. At the moment sawdust can be used in making biofuels, for example, but the situation is still complicated. Due to Finland’s current energy policies it is not profitable to use sawdust as an energy resource.

The state subsidises the use of forest chips, which are partly imported, as a resource for energy but the subsidies do not regard domestic sawdust. This has led to a collapse of sawdust prices as an energy resource – and it is the reason why Korpinen is so optimistic about sawmills. Like pulp mills, sawmills could increase their profitability by gaining profit from one of their by-products.

The near future for Monocell already includes cooperation with an actor who is interested in producing the protein.

“We also hope to find partners from the producers of animal feed. But first we have to do the research and clarify the costs and material use.”