Dairy should be high priority in Brexit negotiations

It is vitally important that the UK dairy industry is recognised and prioritised during Brexit negotiations, Dr David Dobbin, chairman of Dairy UK, asserts. 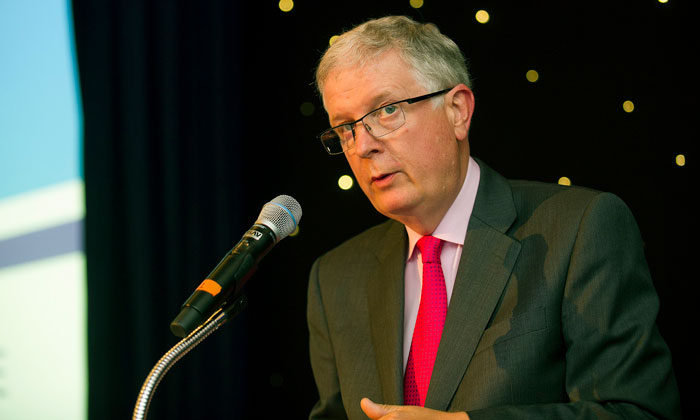 Speaking at Dairy UK’s ‘Brexit and Beyond’ industry seminar in London and at the organisation’s annual dinner, Dr Dobbin said it is in the national interest for dairy to be given due prominence during the Brexit process.

He said: “The importance and relevance of dairy must not be forgotten or traded to the benefit of other sectors.”

Dr Dobbin told delegates that the dairy industry in the UK sees opportunities as well as threats in Brexit but everyone wants stability. He said the UK government and all political decision-makers must ensure that:

Dr Dobbin said: “Uncertainties around Brexit will be a problem for businesses in all sectors in the UK and the EU until negotiations take shape and the dairy industry in Europe is highly interlinked. We need transition and we need engagement.

“Now that Brexit talks are underway it has never been more important to hammer home the significance of dairy.

“We have a strong ambition to provide world class products and play a positive role in the economy, environment, nutrition and social aspects of UK life. Dairy products are found in 98% of UK homes and there are 80,000 people who work in the industry – it’s their dedication and the support of the public that makes our industry vitally important to the UK.  We are a key part of the nutritional fabric of the country.

“The future of dairy is bright – and can be brighter with successful negotiations.”

“The dairy industry is working hard to realise its potential. From initiatives to improve export performance, environmental impact, sustainability, and supply chain integrity, to name a few, the sector stands ready to assist the government in any way during the negotiating process. It is in the UK’s interest for the industry to emerge from Brexit as an effective, dynamic sector equipped to continue to feed the nation for generations to come.”

The Centre for Economics and Business Research (CEBR) has also produced an economic analysis of the potential impact of Brexit on the industry.

Oliver Hogan, director at CEBR, said: “The choices facing the UK as it enters negotiations with the EU can be thought of as a trade-off between autonomy and market access. In essence, the more rigid the UK is on its red lines, the more it can expect to have to move away from unfettered single market access, as it exists today.

“If done in the right way, many Brexit-related worries could disappear. Making this happen would require careful and tolerant negotiating behaviour on both sides, something that has been conspicuous by its absence in recent months.”