Researchers from INRA and their partners have studied the effects of oral exposure to titanium dioxide, an additive (E171) commonly used in foodstuffs, especially confectionery… 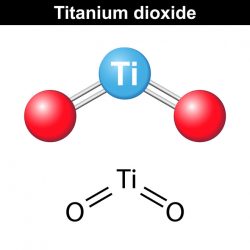 They have shown for the first time that E171 crosses the intestinal barrier in animals and reaches other parts of the body. Immune system disorders linked to the absorption of the nanoscale fraction of E171 particles were observed. The researchers also showed that chronic oral exposure to the additive spontaneously induced preneoplastic lesions in the colon, a non-malignant stage of carcinogenesis, in 40% of exposed animals. Moreover, E171 was found to accelerate the development of lesions previously induced for experimental purposes.

While the findings show that the additive plays a role in initiating and promoting the early stages of colorectal carcinogenesis, they cannot be extrapolated to humans or more advanced stages of the disease. The findings were published in the 20 January 2017 issue of Scientific Reports.

Present in many products including cosmetics, sunscreens, paint and building materials, titanium dioxide (or TiO2), known as E171 in Europe, is also widely used as an additive in the food industry to whiten or give opacity to products. It is commonly found in sweets, chocolate products, biscuits, chewing gum and food supplements, as well as in toothpaste and pharmaceutical products. Composed of micro- and nanoparticles, E171 is nevertheless not labelled a “nanomaterial”, since it does not contain more than 50% of nanoparticles (in general it contains from 10-40%). The International Agency for Research on Cancer (IARC) evaluated the risk of exposure to titanium dioxide by inhalation (occupational exposure), resulting in a Group 2B classification, reserved for potential carcinogens for humans.

Today, oral exposure to E171 is a concern, especially in children who tend to eat a lot of sweets. INRA researchers studied the product as a whole (that is, its mixed composition of micro- and nanoparticules), and have also evaluated the effect of the nanoscale particle fraction alone, by comparing it to a model nanoparticle.

Titanium dioxide crosses the intestinal barrier and passes into the bloodstream

The researchers exposed rats orally to a dose of 10mg of E171 per kilogram of body weight per day, similar to the exposure humans experience through food consumption (data from European Food Safety Agency, September 20162). They showed for the first time in vivo that titanium dioxide is absorbed by the intestine and passes into the bloodstream. Indeed, the researchers found titanium dioxide particles in the animals’ livers.

Elements of titanium (red dots) in the immune cells of rat small intestine INRA, LIST Titanium dioxide nanoparticles were present in the lining of the small intestine and in the colon, and entered the nuclei of the immune cells of Peyer’s patches, which induce immune response in the intestine. The researchers showed an imbalance in immune response, ranging from a defect in the production of cytokines in Peyer’s patches to the development of micro-inflammation in colon mucosa. In the spleen, representative of systemic immunity, exposure to E171 increases the capacity of immune cells to produce pro-inflammatory cytokines when they are activated in vitro.

Three preneoplastic lesions in the rat colon epithelium INRA, Toxalim The researchers exposed rats to regular oral doses of titanium dioxide through drinking water for 100 days. In a group of rats previously treated with an experimental carcinogen, exposure to TiO2 led to an increase in the size of preneoplastic lesions. In a group of healthy rats exposed to E171, four out of eleven spontaneously developed preneoplastic lesions in the intestinal epithelium. Non-exposed animals presented no anomalies at the end of the 100-day study. These results indicate that E171 both initiates and promotes the early stages of colorectal carcinogenesis in animals.

These studies show for the first time that the additive E171 is a source of titanium dioxide nanoparticles in the intestine and the entire body, with consequences for both immune function and the development of preneoplastic lesions in the colon. These first findings justify a carcinogenesis study carried out under OECD guidelines to continue observations at a later stage of cancer. They provide new data for evaluating the risks of the E171 additive in humans.

These studies were carried out within the framework of the Nanogut project, financed by the French Agency for Food, Environmental and Occupational Health & Safety (ANSES) within the French national programme for research related to the environment, health and the workplace (PNR EST) and coordinated by INRA. Sarah Bettini’s university thesis contract was financed by the French laboratory of excellence LabEx SERENADE.