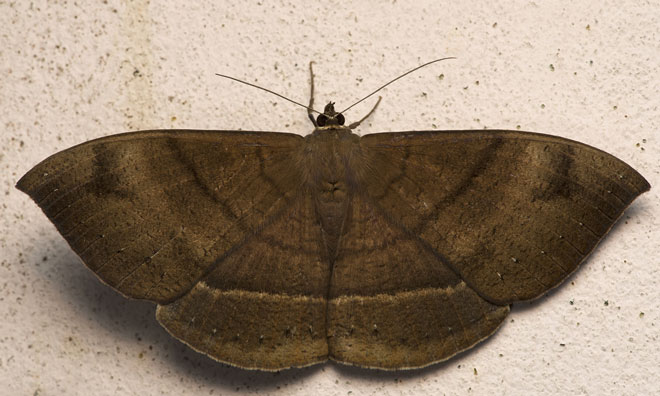 A species of moth looks set to significantly threaten crops in West Africa and the future is looking increasingly uncertain. The moth Spodoptera frugiperda, commonly known as fall armyworm moth, was first registered in Africa in 2016. It is not certain how it arrived, but DNA-analyses show that it is likely to have been more than an introduction. The species is a native of Latin America where it is a well-known pest. It can attack more than 80 different plant species, including important crops such as maize, rice, sugarcane, sorghum, grains and other plants in the grass family.

So far, there have been reports of the moth in Benin, Togo and Nigeria, as well as the archipelago São Tomé and Príncipe. However, it is likely that it may also be established in several other African states. In the coming years, it will undoubtedly be a big problem for all African countries where maize is an important crop.

Extent of damage could be devastating

Researcher May-Guri Sæthre from NIBIO (Norwegian Institute of Bioeconomy) has 15 years of experience with insect pests and biological pest control in Western Africa. This autumn, she returned to Benin to inspect the situation and discuss future project collaborations.

In Benin, maize is grown almost everywhere. When we visited the country in November, we went to several maize fields where there were enormous damage. Plants with tattered, floppy leaves. In addition, we saw many destroyed maize fields from the car window. In the university’s maize field, where they grow certified seeds for the farmers, it was also total destruction, Sæthre recounts. This was despite of two insecticide applications.

Due to the high temperatures in the area, these moths develop very fast. They lay eggs in clusters of 100-300, which hatch after only 2-3 days. The small larvae immediately starts to eat plant material. Gradually they also become cannibals. The larvae stage lasts for 14-20 days depending on the temperature. The subsequent pupa stage lasts for 9-13 days. At any time, there are 4-6 overlapping generations, which means that the plants are unable to rest – they are under constant pressure.

This pest-situation could potentially have a devastating impact on the poorest part of the population, Sæthre says. Maize and cassava are important food sources for millions of people. At worst, huge losses of crops could lead to famine and increased migration.

Usually, this type of pests crosses boarders as stowaways on exported plant material. However, it is not enough to look for egg and larvae. The adult moths have a very good spreading ability, which is quite unusual. In America, fall armyworm moth can migrate enormous distances in its lifecycle.

During the summer, the adult individuals start dispersing. They follow northerly airflows and gradually appear throughout most parts of the USA and in Canada. Here, however, they die during winter, as they cannot survive the low temperatures. After all, this is a tropical species that thrives in temperatures around 27-28 degrees Celsius.

Currently, there are no successful methods to combat fall armyworm moth in West Africa. However, the extent of damage is already so large that it is crucial to get started quickly. In Benin, controlling this new pest is top priority for the agricultural authorities.

Sæthre wishes to set up an international research collaboration to combat the pest. However, this will depend on funding.

The aim is to establish a regional programme where we can obtain knowledge to benefit all countries in the region, including Niger, Nigeria, Benin and Togo, she says.

We had productive meetings with representatives from the Government of Benin in November. In addition, NIBIO has signed a Memorandum of Understanding on a research collaboration with the National University of Agriculture (UNA) in Porto-Novo and Ketou. We have previously collaborated with the International Institute of Tropical Agriculture (IITA) for many years, and combined, we have both the expertise and facilities to start up on short notice.

In addition to short-term control measures, we may also look at more long-term measures, Sæthre says. This may for instance be to map out which natural enemies the species have in its’ original areas. Is it possible to safely transfer some of these to Africa?

Normally it would take years to obtain knowledge of pest control measures. The benefit in this case is that the species is known, and that there is already some knowledge available concerning the biology of the moth and also the natural enemies. There is a lot of literature available, both in Latin America and USA. As a result, the researchers do not need to start from scratch.

NIBIO already has a connection to Latin-America. This is where the pest originates. I imagine that we can set up a collaboration that also involves our Latin American partners.

Could become a threat in Europe

Fall armyworm moth is on the European and Mediterranean Plant Protection Organization (EPPO) list of quarantine pests. Import to Europe is therefore banned. The species do appear from time to time, but is quickly managed. It often reaches Europe with ornamental plants, fruits or vegetables.

There is a high risk that the species could become established in the Mediterranean area. Therefore, it is important to have good control routines. Theoretically, it is not inconceivable that adult insects could cross the Sahara on their own, but they are dependent on favourable air currents to manage this.