The University of Southern California team have issued new advice on how to conduct future research on links between diet and the risk of dementia. 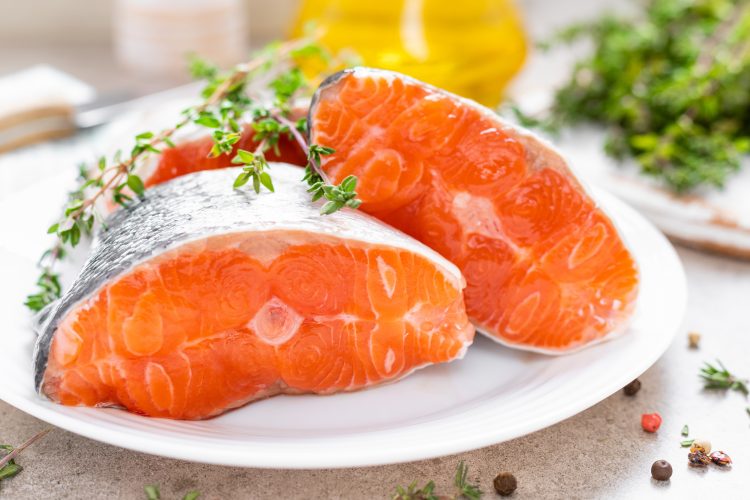 Fatty seafood, such as salmon, has long been associated with reducing the risk of dementia

Anyone searching the internet for brain healthy foods will find plenty of advice on which foods to eat and which to avoid – often contradicting each other in the process. Some of those stories point to observational studies that have suggested a link between the lower or greater intake of certain foods and the risk of dementia, but clinical research attempting to connect specific nutrients or diets to cognitive function has not found convincing evidence.

“Many trials have not found that making people eat healthy or exercise is translating into benefits in the ways that is expected from the epidemiological research,” said Hussein Yassine, MD, associate professor of medicine and neurology at the Keck School of Medicine of University of Southern California (USC) and the Kenneth and Bette Volk Chair of Neurology of USC.

“That means either there is no causal connection or that these studies have not been properly designed.”

To understand this discrepancy between epidemiological research and clinical trials, Yassine led the Nutrition for Dementia Prevention Working Group, a team of scientists who spent two years surveying the existing literature on nutrition and dementia risk. Their analysis, just published in The Lancet Healthy Longevity, identifies major limitations to existing trials that impact how nutrition affects the brain and offers a set of recommendations to guide and improve future research.

Yassine revealed just how difficult widespread national research of this nature can be. Epidemiological studies show, for example, an association between people who eat fatty seafood, such as salmon, and a lower incidence of dementia. But it is hard to separate nutritional information from other factors that might also play a role, such as where a person lives, concurrent healthy lifestyles or whether they have access to proper medical care.

Most of the clinical research on food and brain health may not have been conducted over a period of time long enough for the results to be meaningful because it is unknown how long it takes for a healthy diet to affect cognition. “If it takes five to 10 years,” said Yassine, “then studies that lasted for two years or less are not accurately reflecting the effect of the diet on cognition.”

The research team revealed that using biomarkers rather than cognitive tests, the most commonly used tool to analyse the success of an intervention, may lead to more meaningful immediate results that can guide longer interventions that target clinical outcomes.

Technology, such as brain imaging, can be extremely effective in tracking changes to the brain over time. Likewise, they point out that testing blood or stool samples for certain biomarkers, such as suboptimal intake of a specific nutrient, can also be used both to select the best participants and help determine whether study participants are responding to the intervention under study.

Emerging knowledge about the microbiome can also improve outcomes of research. Yassine noted that people benefit from food differently based on differences in the microbiome. “You cannot fully study how the diet is working without studying the microbiome,” said Yassine. There is also a need for more understanding of the underlying relationship between the gut microbiota and cognition in large populations of diverse individuals.

Finally, the group concluded that researchers should consider utilising a wider variety of study designs, not just randomised controlled trials, and more thought should go into choosing participants in trials.

They note that one strategy would be to design small, personalised trials that consider participants’ genetic risk, quality of their diet, and analysis of their microbiome while utilising biomarkers that reflect brain functions. Another approach involves designing large, pragmatic electronic health trials using mobile phones or tablets to collect data, aimed at people with dementia risk factors.

While much of the research to date has focused on older people, several high-quality cohort studies suggest that middle life could be an optimal time to begin such research, before the changes associated with dementia set in, so researchers can track changes over time. Additionally, the group points out that studies need to consider the dietary preferences of underrepresented groups, some of whom are disproportionately affected by dementia.

“This is an important document for anyone doing research on diet and how it relates to dementia,” said Lon Schneider, MD, Professor of Psychiatry and the Behavioral Sciences at the Keck School of Medicine and Della Martin Chair in Psychiatry and Neuroscience. “It is important that future trials yield accurate results that can be translated into better clinical care for patients.”