As coffee leaf rust plagues the crops of Hawaii, growers and agricultural officials seek a desperate solution…could this be it? 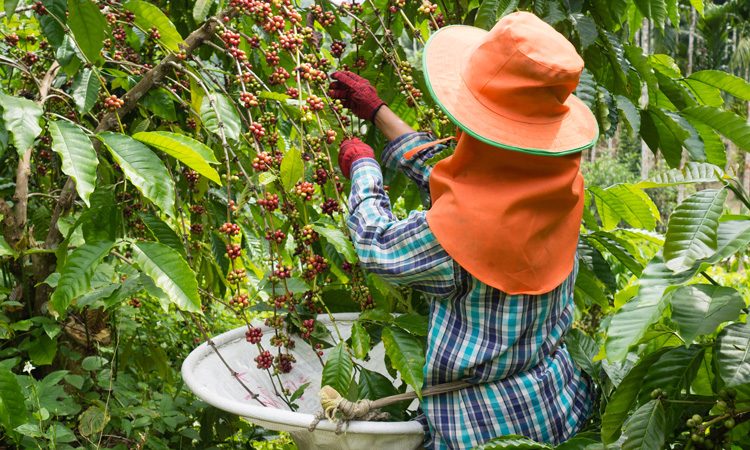 Hawaii growers and agricultural officials have been alarmed by the fact that coffee leaf rust (CLR) has been spreading rapidly, but new research may offer a solution.

The devastating plant fungus, CLR, reduces yields and harms coffee trees by attacking the plant’s leaves. It was first detected on the islands of Maui and Hawaii in 2020, and has since been found on the islands of Oahu, Lanai, Kauai and Molokai. A collaborative effort was quickly mobilised by agricultural workers in response to the widening threat.

“We were in the process of preparing for CLR, but it wasn’t the top priority. Now it is,” said Christopher Manfredi, Executive Director of the Hawaii Coffee Association (HCA).

The Synergistic Hawaii Agriculture Council (SHAC) and HCA, along with funding from the Foundation for Food & Agriculture Research’s (FFAR) Rapid Outcomes from Agricultural Research (ROAR) programme, is pursuing a multi-pronged response to CLR, which causes $3 billion in damages worldwide every year.

Hawaii’s unroasted coffee industry is valued at $113.01 million annually, according to research published in Alliance for Science. In addition to this, most coffee farms are family-run and smaller than two acres, meaning that many people depend on the industry for their livelihood.

It’s like your house is on fire, and you’re working to get a permit to buy a hose.

“Numbers don’t do a good job of talking about the deep, 200-year heritage of coffee in Hawaii,” said Suzanne Shriner, Director of SHAC. “The potential losses of income to growers are severe, but it also jeopardises an entire community built around coffee. The Kona region of Hawaii is a mecca for visitors doing farm tours, local shops selling coffee, and all the ancillary jobs and attractions that stem from the lure of the coffee bean.”

Growers are already feeling the effects, as the disease causes defoliation that can cut yields by up to 70 percent and significantly increase production costs, the research has found. In response, many farmers have increased their prices for unroasted coffee by $1.50 to $3 per pound.

“Our growers are desperate for a solution to CLR,” Shriner continued.  “The FFAR grant allowed the researchers an extension to quickly deploy answers to the most basic questions of this disease. As our learning curve grows, it’s built on the base of the joint funding of FFAR and our community partners who matched the funds.”

“Our objectives are to generate a high-quality genome for the fungus (Hemileia vastatrix) that causes coffee leaf rust (CLR) disease,” Dr Catherine Aime, one of the research authors, explained. “If we can determine how the rust populations behave and generate diversity, that will inform management programmes. For instance, if we find that environmental factors are the most important in selecting hypervirulent strains, then altering host growth conditions to be less favourable to CLR would be indicated.  If, however, we find that new races are constantly evolving, then breeding for durable resistance would be a better strategy.”

The research has implications for understanding the disease that go beyond addressing its outbreak in Hawaii.

“The ultimate goal is to provide the knowledge, based on genomic and population analyses, about how the rust manages to erode host resistance so quickly,” Dr Aime added. “Once this is understood then we can better plan strategies to mitigate outbreaks, whether that involves changes in management, or breeding strategies. Rust fungi cause some of our most serious diseases of agricultural crops and forest products. So, any insights into how they overcome host resistance may help to inform strategies to control them in other systems.”

Control may never be possible. But management might be.

While most other coffee-growing regions have planted rust-resistant varieties, none of Hawaii’s commercially grown varieties are resistant, according to the researchers. Furthermore, none of the fungicides that are most effective in fighting the disease were approved for use on coffee on any of the islands.

“It’s like your house is on fire, and you’re working to get a permit to buy a hose,” said Manfredi, noting that growers have had to partner with state and national researchers as well as agencies to quickly permit the safe use of systemic fungicides that are approved for coffee elsewhere and on other food crops in Hawaii.

The authors add that outreach and education are also important components to prevent this happening again in the future. Under the FFAR grant, the University of Hawaii’s College of Tropical Agriculture and Human Resources is creating materials and educating Hawaii growers on the best-known management practices for CLR.

“Control may never be possible. But management might be,” concluded Shriner.