Researchers from the University of Michigan found that the bacteria found in the human gut differ around the world, reinforcing the relationship between diet and the human microbiome. 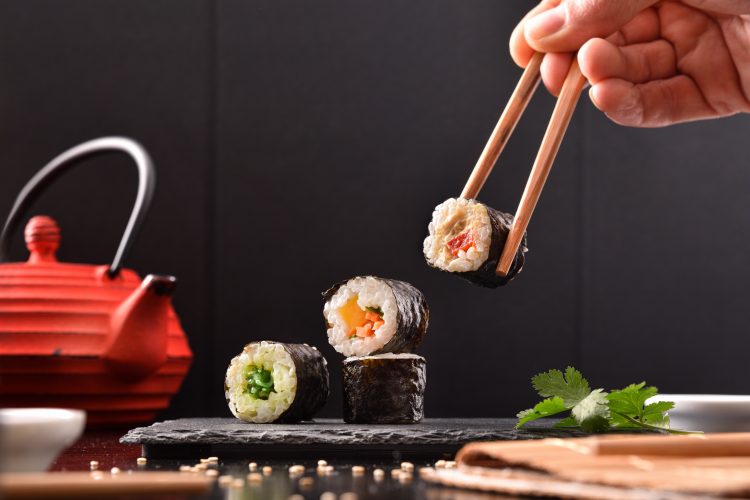 If you are a big fan of sushi, you might want to thank the ocean not only for the fish it’s given you and the handy seaweed wrapper around it, but also for the very ability to digest that natural packaging. As a new Michigan Medicine study suggests, bacteria in the gut that enable us to digest seaweed originates in the ocean – but how did it get into our bodies?

The ocean is one of the largest reservoirs of carbon on the planet, much of it locked inside seaweed. Marine bacteria play a critical role in the carbon cycle by breaking down seaweed. A little over a decade ago, researchers found the genes that enable ocean bacteria to degrade the complex carbohydrate known as porphyran, found in cold-water seaweed, in a microbiome sample from a Japanese adult.

The new study, led by Nicolas Pudlo, PhD, Gabriel Vasconcelos Pereira, PhD, and Eric Martens, PhD, of the Univeristy of Michigan Medical School, has found that these genes of oceanic origin are more common than previously thought, entering the human gut microbiome through a process known as lateral gene-transfer.

During digestion, gut bacteria in humans break down dietary fibre, or polysaccharides, found in fruits, vegetables, and grains. However, the polysaccharides found in seaweed have different chemical structures than land-sourced foods. Somehow, genes from the ocean-dwelling Bacteroidetes—a genus of bacteria that is a key player in the microbiome—found their way into the human gut.

“Whether they came directly from an oceanic bacterium someone just happened to consume or through a more complex path into the human gut is still a mystery,” said Martens, a professor in the Department of Microbiology and Immunology.

To examine just how extensive the seaweed gene clusters are in gut Bacteroidetes, the team turned to an unusual source: stool samples from U-M undergraduate students.

The team found that genes for processing laminarin were broadly represented in the samples, possibly linked to the related ability to process beta-glucans, sugars also found in oats and whole grains. Yet, the other seaweed polysaccharides were used by fewer bacterial species and present in fewer samples.

“The genes to process agarose and porphyran, two of the more commonly consumed seaweeds in Southeast Asia, tended to be enriched in the people living there,” said Martens. Taking a closer look at the geographic distribution of the gene clusters, the team referenced genomic surveys from samples taken from more than 2000 people in Asia, Africa, North and South America, and Europe.

Adding further intrigue to the evolution of seaweed digestion, the team fortuitously discovered that the bacteria Firmicutes, which are even more prevalent in the human gut than Bacteroidetes, also have picked up the genetic ability to grow on seaweed polysaccharides.

“Firmicutes are known to live in fish intestines and the closest ancestors of the genes that appear to have jumped into human gut Firmicutes were ones found in fish,” said Martens.

The research team claims the study opens up new questions about the complex interplay between diet and the adaptation of the human gut microbiome in populations around the world.