Following the new rules for mask-wearing on transport and in shops, the trade union has called on the UK Government to apply the rules to hospitality too. 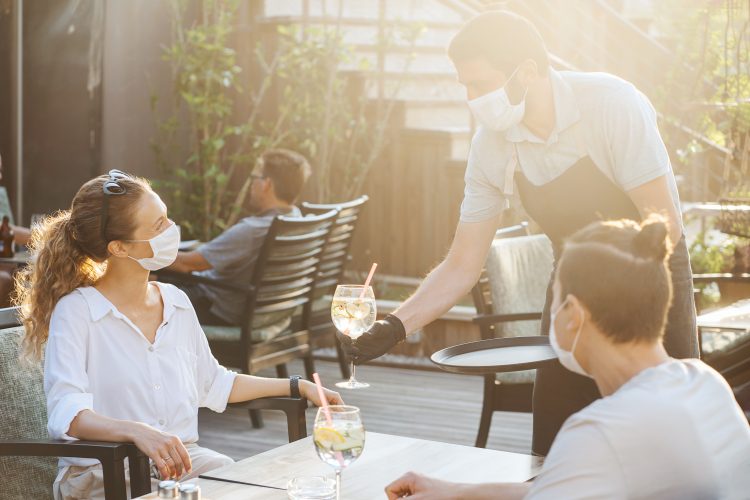 Trade Union Unite has called for Culture Secretary Nadine Dorries to ensure mandatory mask wearing for customers visiting hospitality venues across the UK, in the same way that those travelling on public transport are legally obliged to do so from today.

The call has come from Unite union members in the hospitality industry. Unite claims they are angry that they are being left to enforce the wearing of face masks which causes disputes with customers, which can result in threats of physical abuse, which have included death threats, by customers to staff.

“We must ask why hospitality is the only area in the public arena where facemasks are not compulsory. Does the government consider the health and safety of hospitality workers less of a priority than that of workers in other sectors?” said Unite general secretary Sharon Graham.

“It is outrageous that hospitality workers are being left to police the wearing of facemasks due to the lack of proper mandatory rules or effective legislation. My union is pledged to fight to defend the jobs pay and conditions of our members and the health and safety of our hospitality members is high on that list.”

Unite is calling on the culture secretary Nadine Dorries to immediately open talks with industry leaders and the unions with the aim of imposing mandatory mask wearing at hospitality venues across the whole of the UK, unless seated with family members and/or close friends and while eating and drinking.

Unite industrial organiser for hospitality Bryan Simpson added: “Unite has received many reports from its hospitality members who have been verbally and physically abused and some even receiving deaths threats for asking customers to wear facemasks.

“We are therefore disappointed that yet again throughout this pandemic that the health, safety and working conditions of hospitality workers in pubs, cafes, restaurants and hotels isn’t even an afterthought for this government. Many thousands of these employees are disproportionately on low pay and many are women, young workers or migrant workers.

“Our view is that facemasks must be compulsory in all public spaces – with no loopholes – and that it must not be left to individuals working in hospitality or any other sector, for that matter, to enforce.”