Animal advocacy groups are urging the UK Government to enforce laws that prohibit chickens from being carried by the legs, which they say leads to pain and distress before slaughter. 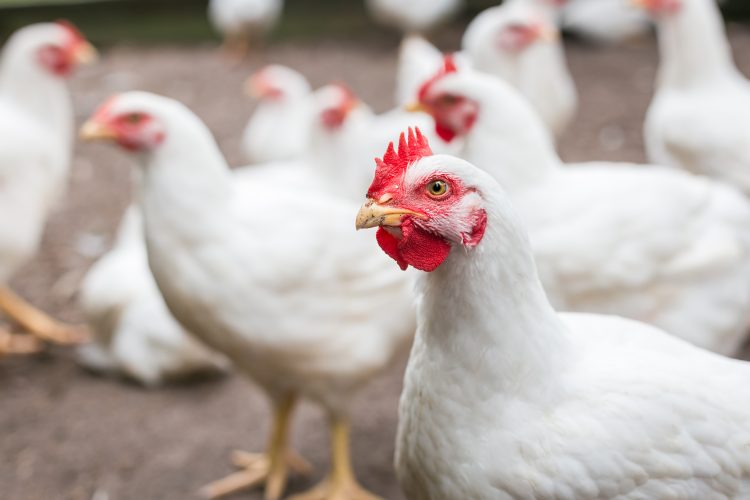 Today a joint letter signed by 14 animal protection charities has been sent to Zac Goldsmith, UK Minister for the Department for Environment, Food and Rural Affairs (Defra) calling on the Government to properly enforce regulations designed to protect chickens at the time of slaughter.

Handling chickens by the legs is illegal under The Welfare of Animals (Transport) (England) Order 2006, which transposes Council Regulation (EC) No 1/2005 from the EU. However, despite this it is referenced as a possible way of handling in the official Government Codes of Practice, which farmers use to guide their operations. Consequently, the signatories say catching chickens by their legs is standard industry practice in the UK.

“At an already distressing and often painful time for these chickens, they are grabbed by their legs and flung upside down, with producers often carrying six chickens per hand,” said Pru Elliott, Senior Campaigner at The Humane League UK.

“Chickens don’t have a diaphragm like us, so being carried upside down causes their internal organs to crush their lungs, and on top of that intensively reared chickens have very fragile legs and joints. Carrying them like this is causing huge amounts of suffering and the Government isn’t doing anything to stop it.”

According to The Humane League, 3.1 million chickens are transported to slaughter every day in the UK. Animal protection groups claim all commercial-sized farms practice catching chickens by the legs, which they say means the law is being broken millions of times a day.

The legislation states that animals should not be lifted or dragged by the head, ears, horns, legs, tail or fleece, or handled in such a way as to cause them unnecessary pain or suffering. A recent case in The Netherlands ruled that the Dutch authorities must investigate companies handling chickens by the legs after accepting that it is prohibited under the same law that applies to the UK.

“This legislation was created to protect animals and minimise any stress caused during a very stressful activity. The fact that the law is being broken so widely is unacceptable. The Government guidance is currently encouraging unlawful activity,” said Edie Bowles, solicitor at Advocates for Animals.

Companies elsewhere in Europe have started to adopt a progressive catching method developed by Dutch animal charity Eyes On Animals known as the Upright Catching Method. Rather than being caught and carried by the legs, chickens are caught one-by-one with both hands placed around the body, holding the wings closed, and the chickens are carried to and placed in the transport crate while upright.

“The Upright Catching Method is common sense. It’s how the public would want and expect animals to be handled, and how anyone with a pet chicken would pick them up. It’s not complicated, but it is voluntary so it’s a question of how committed companies are to the wellbeing of the animals and it will stay that way unless the Government starts to enforce the law.” said Nicola Glen, UK Inspector for Eyes on Animals.

“For other animals the law is enforced, and if we do see cases of animals such as pigs and sheep carried by the legs people are outraged, but it’s not the same for chickens.”

Advocates for Animals, Eyes on Animals, The Humane League

Advocates for Animals, Eyes on Animals, The Humane League