A group of researchers have evaluated whether using technology whilst eating has an impact on the amount of food we eat and the memory we retain of the consumption. 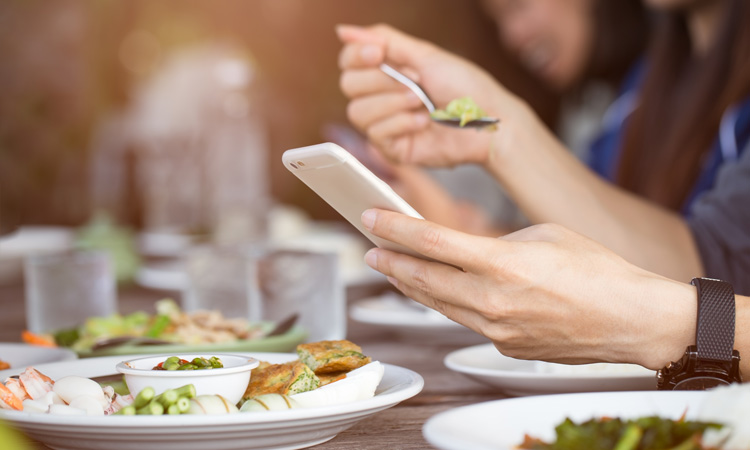 Being distracted by technology during mealtimes may decrease the amount of food a person eats, nutrition scientists have suggested in a new study.

When 119 young adults consumed a meal while playing a simple computer game for 15 minutes, they ate significantly less than when they ate the same meal without distractions, said lead author, Carli A. Liguori, University of Illinois at Urbana-Champaign,

Participants’ food consumption was evaluated on two separate occasions – one day when they played the game while eating and on another day when they ate without distractions.

The game, called Rapid Visual Information Processing, tests users’ visual sustained attention and working memory and has been used extensively by researchers in evaluating people for problems such as Alzheimer’s disease and attention-deficit disorder.

The game randomly flashes series of digits on the computer screen at the rate of one per second. Participants in the study were instructed to hit the space bar on the keyboard whenever they saw three consecutive odd numbers appear.

“It’s fairly simple but distracting enough that you have to really be watching it to make sure that you don’t miss a number and are mentally keeping track,” Liguori said. “That was a big question for us going into this – how do you ensure that the participant is distracted? And the RVIP was a good solution for that.”

The participants, who had fasted for 10 hours before each visit, were told to consume as much as they wanted of 10 miniature quiches while they were either playing the game or eating quietly without distractions for 15 minutes. The food was weighed and counted before and after it was given to each person.

After a 30-minute rest period, participants completed an exit survey that asked them to recall how many quiches they had been given and the number they had consumed. They also rated how much they enjoyed the meal as well as their feelings of hunger and fullness.

Liguori hypothesised that, in keeping with prior research, when people ate while using the computer game they would not only consume more food but would have poorer memory of what they ate and enjoy it less. Instead, she found that participants ate less when they were distracted by the computer game. Moreover, participants’ meal memory – their ability to recall how much they had been served and eaten – was less accurate when they were distracted than when they ate quietly without the game.

Moreover, when participants who engaged in the distracted eating on their first visit were served the quiches on their next visit, “they behaved as if they were encountering the food for the first time, as evidenced by a lower rate of consumption similar to that of those who began” with the non-distracted meal, according to the study.

“It really seemed to matter whether they were in that distracted eating group first,” said Liguori. “Something about being distracted on their initial visit really seemed to change the amount they consumed during the nondistracted meal. There may be a potent carryover effect between the mechanism of distraction and the novelty of the food served.”

The results suggest that there may be a difference between distracted eating and mindless eating. Although the terms are often used interchangeably, Liguori hypothesised that they may be distinctly different behaviours with nuances that need to be explored.

Ligouri said that her findings could have been influenced by factors such as the type of distraction that was used, the type of food served, the type of technology being used or by using college students as the study population, limiting the diversity in participants’ age, race, food preferences and motivation to regulate their consumption.

One response to “Does using technology impact our food consumption?”