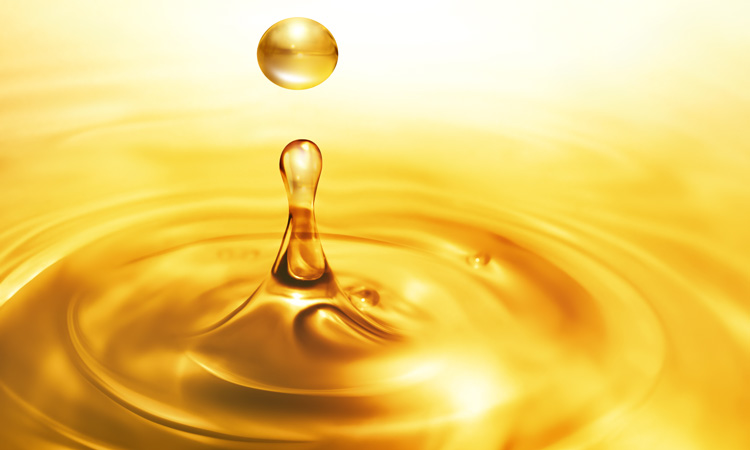 Grease is a very well described material in technical and scientific literature. Grease is a thickened lubricating oil which can stay in place in moving machinery parts exposed to high shears, temperature, dirt and moisture. A typical grease contains about 20-30 percent structuring agent, 5 percent additives and 65-75 percent oil.

Greases have been manufactured and optimised for an array of applications; however, there are several key properties that they must exhibit. A grease must stick and stay on a metal surface at the temperature required, so it must be tacky, and tackifiers are usually added. Grease must also be able to withstand substantial shear forces without breaking down and separating. Since it is basically a semi-solid lubricant, it should decrease the friction coefficient between metal surfaces. It must also have a high heat transfer coefficient so that it can help dissipate the heat created by frictional forces. It must provide hydrodynamic and mixed lubrication; while boundary lubrication is usually not claimed too much in grease (i.e. cold start related with little oil present between surfaces). The grease must also not turn into an oil and flow at high temperatures; it must either contain viscosity index enhancers or rely on its structure to prevent catastrophic losses in viscosity due to heat.

The anti-wear properties of lubricants are very important and anti-wear additives (extreme-pressure additives) can be present in the more specialised greases. The mechanisms behind anti-wear are complex and poorly understood. The chemical reaction of these additives, leading to the formation of a surface film that physically protects the metal from welding with the neighbouring metal surface due to frictional heat is key to this functionality. The lubricant must also help prevent metal oxidation and corrosion. Again, anti-corrosion additives are used for this purpose. Moreover, if the grease meets rubber-based seals, it should not degrade them.

In the authors’ view, a true grease should also repel water and thus also function as a seal against moisture. The most common fluid used in lubricants and grease is mineral oil, and this base fluid is structured using different strategies, and may be loaded with additives to achieve application-specific functionality.

A food-grade grease must perform like a regular grease, but also satisfy further requirements such as being safe and non-toxic to humans, not have strong tastes or flavours, be odourless and internationally approved. The US Department of Agriculture (USDA) has three categories for such grease, but the most applicable ones are H1, where the grease can meet the food, and H2, where it cannot.

However, the USDA is not considered today the governing body for grease regulations. The DIN Standard V 0010517, 2000-08 from the German Institute of Standardization has now been adopted by NSF (NSF 116-2000, non-food compounds used in food-processing facilities – food-grade lubricants) and submitted to the American National Standards Institute for approval. Most other jurisdictions have adopted the DIN standard as well, which will supersede the USDA standards. However, none of these standards deal with the nature of the grease or lubricant, just whether it is safe for the grease to come in contact with food. Obviously, many of the additives found in specialised grease cannot be added to food machinery due to their toxic nature.

The first step towards a greener, and truly food-grade grease is to replace the mineral oil base with a high stability edible oil, such as vegetable oils with very high contents of oleic acid. Oleic acid is a monounsaturated fatty acid with much higher resistance to oxidation than oil containing polyunsaturated fatty acids. For example, an oil with 75 percent or more oleic acid can withstand 24 hours at 110oC, while soybean oil may last only seven-eight hours.

The first step towards a greener, and truly food-grade grease is to replace the mineral oil base with a high stability edible oil

We are aware of algal oils and high oleic sunflower oils with oleic acid contents higher than 90 percent. Choices for high stability edible oils include high-oleic canola, sunflower, safflower, soybean and algal oils; however, any oil can be made into a high-oleic oil by genetic engineering. This opens up the possibility of designing structure and functionality directly in the oil (the type of fatty acids, hydroxylation amount and position, and positional distribution within the triglyceride molecule). However, even though these oils are more stable, they do not come close to mineral oil, which contains very few or no double bonds. So, an antioxidant must always be used. Antioxidants added at 0.01-0.1 percent (100-1000ppm) levels can help. Mixed tocopherols and some citric acid to chelate any free Fe+2 enhance oxidative stability. Of course, synthetic antioxidants such as TBHQ (tert-butyl hydroxy quinone) work very well but are not quite ‘natural’.

The next step is to choose the ‘thickener’ carefully. We have zeroed in on two strategies; i) fatty acid metal salts, particularly food-grade calcium stearate, and ii) the GRAS polymer ethylcellulose, an edible cellulose derivative. We make calcium stearate grease from stearic acid and Ca(OH)2, while ethylcellulose greases simply need to be heated above the glass transition temperature of the polymer (~140ºC) in order to be dispersed in the oil. Upon cooling, a gel or paste is formed with great tackiness and anti-wear properties. The type of oil employed can also be selected to prevent corrosion and enhance boundary lubrication properties.

In our experience, grease oxidation is the major drawback of these natural products, and thus antioxidants become a very important component. Even though vegetable oils are esters, surprisingly we do not find hydrolysis to be a major issue.

In the figure below there is a simple back-extrusion measurement of our calcium soap grease and the polymeric ethylcellulose grease as it compares to a commercial food-grade grease. In this back-extrusion analysis, a cylindrical probe of 9mm diameter is plunged at 1.5mm/s into a plastic tube (15mL centrifuge tube) of 15mm internal diameter, containing 12g of sample. As can be appreciated, the concentration of thickener, either calcium stearate or ethylcellulose, influences the final hardness and flow properties of the grease. 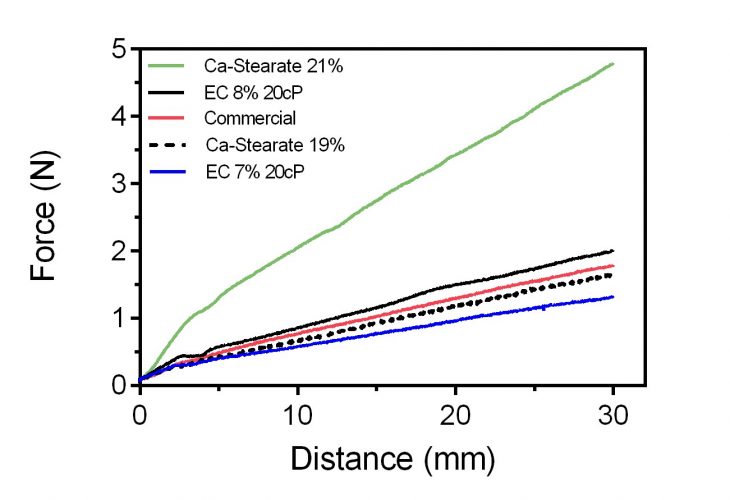 What is also obvious is that the rheological properties of a commercial food-grade grease can be exactly matched using an edible formulation. Even though green edible greases are less stable towards oxidation, they offer health and safety as well as sustainability advantages that cannot be ignored. Optimising formulations for enhanced shelf-life is also progressing very fast, and commercial-quality products are a reality today. 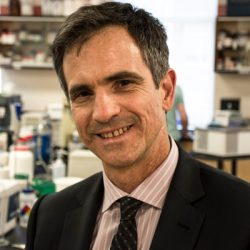 Alejandro Marangoni is a Professor and Tier I Canada Research Chair in Soft Materials Science at the University of Guelph, Canada. His work concentrates on the physical properties of lipidic materials in foods, cosmetics and biolubricants. A scientist with over 400 research papers, 85 book chapters, 13 books and 40 patents to his name, he has been the recipient of many scientific awards throughout the world, and is a Fellow of the Royal Society of Canada, the American Oil Chemists’ Society, the Institute of Food Technologists and the Royal Society of Chemistry (UK). 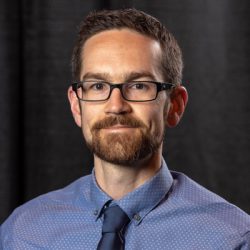 Andrew J Gravelle is a Research Assistant and PhD Candidate with the Food, Health, and Aging laboratory, Department of Food Science, University of Guelph, Canada. He has over 10 years of experience in academic research, where his work has focused predominantly on food structure, and the application of soft matter concepts to food systems. Andrew has worked extensively in the area of edible oleogels, characterising and tailoring the functional properties of oleogels structured with the polymer ethylcellulose for use in a diverse range of applications. Examples have included designing fat mimetics with improved nutritional profile, cosmetic pastes, and greases/lubricants. 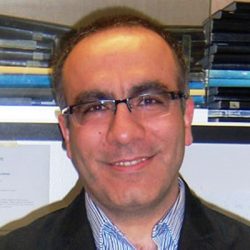 Saeed M Ghazani received his Bachelor in Food Science and first Master of Science degree in 1996 and 2000, respectively. Saeed started working on fats and oils in 2000 as a process control supervisor in oil refineries. After immigration to Canada in 2010, Saeed received his second Master of Science in 2012 and his PhD in 2018. From January 2013, Saeed has continued working as a research associate under the supervision of Professor Alejandro Marangoni. His main research has focused on chemical and enzymatic interesterification of oils to improve their physical, chemical and functional properties.