HMO’s are special sugars that play a crucial role in baby’s development. With biotechnological processes they can be produced on industrial scale. 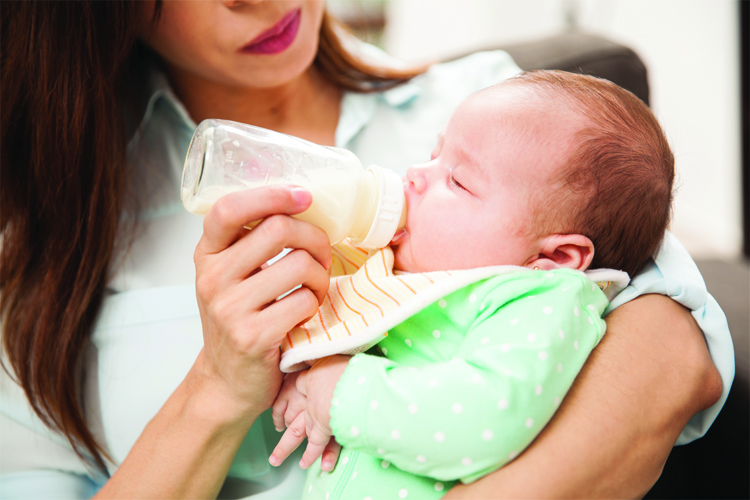 Human milk oligosaccharides – or HMOs for short – are special sugars that play a crucial role in the development of newborns and toddlers. HMOs are produced only by women in the late stages of pregnancy and breast-feeding mothers.  Today however, HMOs can be produced using straight-forward biotechnology processes. One of the pioneers in this field, and a leading manufacturer of artificial HMOs that closely mimic nature, is the German biotech firm Jennewein Biotechnologie.

Human milk oligosaccharides – or HMOs for short – are special sugars that play a crucial role in the development of newborns and toddlers. Because the body can’t digest them, HMO’s provide no nutritional value. Their importance is tied to the fact that they promote the colonization of bacteria in the intestines of infants, influence the immune system, protect against serious viral and bacterial infections and form the nutrients required for healthy brain development.

HMOs are produced only by women in the late stages of pregnancy and breast-feeding mothers.  That’s why formula-fed infants have long been unable to benefit from these special sugars. Today however, HMOs can be produced using straight-forward biotechnology processes. One of the pioneers in this field, and a leading manufacturer of artificial HMOs that closely mimic nature, is the German biotech firm Jennewein Biotechnologie.

Do it – the biotech way

The value of human milk sugars for infant’s development and health has been well-known for more than 100 years. To date however, the chemical industry has been unable to develop a process to synthesize HMOs cost-effectively and on a large scale.

Using microorganisms to produce these complex oligosaccharides streamlines the process and makes industrial scale manufacturing possible. Stefan Jennewein, founder and CEO at Jennewein Biotechnologie, dedicated himself to this idea years ago. His aim was to produce large quantities of HMOs at a price that would allow baby food manufacturers to make the health benefits of HMOs available to all infants. Most scientists and industry representatives cast doubt on the feasibility of his project at the beginning. Presumed high production costs and regulatory approvals were widely regarded by experts as insurmountable hurdles.

Jennewein has been producing HMOS for nearly 9 years now. Relying on special E. coli fermentation processes, scientists at the company overcame the challenges and found a way to successfully manufacture selected human milk oligosaccharides on a large scale. The product is sold to manufacturers of milk formula around the world.

More than 150 different HMOs have been identified, representing the most diverse range of milk sugars. The composition of milk oligosaccharides in human breast milk is completely unique from mother to mother. The mix is influenced by genetics, and also by time and the duration of breast feeding, the mother’s state of health and her diet. The child receives different sets of sugars depending on the mother’s lifestyle.

However, some HMOs, such as 2’-fucosyllactose are produced in large quantities by every mother. And it’s exactly these that Jennewein Biotechnologie has addressed.

By creating transgenic E. coli bacteria that carry the genes for all of the necessary enzymes, Jennewein developed a way to produce HMOs with two key processes: introducing the genes for specific glycosyltransferases that allow the bacteria to build up the complex milk oligosaccharides and adapting the bacteria’s energy metabolism in order to produce huge amounts of activated sugars as starting material for the HMO structures.

Only by combining the specific enzyme range with the appropriate activated sugars, it is possible to develop the robust E. coli strains that Jennewein successfully uses for their large-scale HMO production.

Human milk oligosaccharides produced with biotechnology processes have the potential to revolutionize the functionality of baby formula. Stefan Jennewein’s vision is a future in which all infant milk products contain HMOs, thus making sure all babies have the opportunity to reap the corresponding health benefits.

He is fulfilling this vision step by step through his company. Jennewein Biotechnologie has been conducting a European-wide clinical study based on a novel, pre-formula mixture that the company developed on its own. This special HMO mix includes the five most abundant human milk sugars and features a composition similar to breast milk.

With confidence into the future

Infant formulas are not the only application for HMOs. Adults can profit from the wide range of health benefits as well. For example adults who have problems with the gut can benefit from them.

The prospects for success are also reflected in Jennewein’s continued pioneer role and steady growth, which recently led the company to open up a new R&D center in Bonn.