Viruses – An increasing hazard in meats? 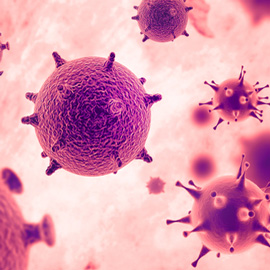 We have recently become increasingly aware of viruses as foodborne pathogens. They tend to have low infective doses, and our general knowledge of how they react to common microbiological controls, such as heat, sanitisers, low pH and low water activity, is quite sparse. Viruses are much smaller than bacteria, and they cannot grow outside of a host cell. They do not grow on foods; they are simply carried by them. When a suitable human host eats the food, the virus can infect the cells in the host and rapidly multiply until the host cell breaks open, releasing more virus particles. These go on to infect more cells, which creates more virus particles and so on.

We cannot easily culture viruses outside of their host cells; this not only means that it is difficult to test for their presence in a food and whether or not virus particles are ‘viable’ (i.e. capable of infecting a host),  it also means that it is difficult to research control measures that can be used to inactivate them. These problems mean that we really have little knowledge of the prevalence of viruses within ingredients and foods, and even less information on how to treat those ingredients and foods to eliminate the viruses that may be present.

Hepatitis E appears to be fairly stable, with one report suggesting that a heating temperature/time of 71°C for 20 minutes is required for complete inactivation. Symptoms of illness, which may only appear 6 weeks after infection, are an acute hepatitis, which is usually self limiting. Hepatitis E is a relatively new addition to the list of food pathogens. There are increasing numbers of human cases and epidemiological case control studies have linked infection to the consumption of both raw and ready-to-eat pork products.

Estimates have suggested that only 11% of Norovirus cases are a result of foodborne transmission, the rest being presumably from person-to-person spread. For Hepatitis A and E it is possible that a greater proportion of cases will be foodborne.

Studies done on Norovirus illness in the Netherlands and Canada suggest that beef, pork and poultry each account for between 2% and 3% of cases, whilst fresh produce accounts for between 7% and 30%, and shellfish and fish between 16% and 34% of cases. For Hepatitis A, shellfish and fresh produce are again being implicated as the major cause of illness. The picture for Hepatitis E is different. In the UK there has been a rise in cases of this virus over the past 10 or so years. Some infections can be linked to foreign travel; however, there are increasing numbers of non-travel associated cases and many of these are caused by a particular strain of the virus that is known to be associated with the European pig population.

Results of a recent UK survey on pigs has indicated that, of over 600 pigs tested, almost 93% were seropositive for Hepatitis E (i.e. carried antibodies that showed previous infection with the virus) and nearly 6% carried the RNA of the virus (i.e. were infected at the time of testing).  Survey work found evidence of Hepatitis E RNA in pigs’ livers at the slaughterhouse, on surfaces at both processing plants and at the point of sale, and in 10% of pork sausages at the point of sale. These findings have caused some concern over the role of pigs and pork products in transmission of the Hepatitis E virus.

All three viruses are fairly resistant to a number of control measures. Some sanitisers have only a limited effect, and heat may have to be applied for some time to deliver an effective kill. However, much of our knowledge is hampered by problems in establishing whether viruses are actually rendered non-infective by a specific control measure. The methods we use are based on detecting viral RNA; this may remain detectable after the virus is rendered non-infective, making interpretation of inactivation data very difficult. This problem has resulted in much work being done with “surrogate” viruses. These are viruses that are considered to be similar to the foodborne viruses of concern, but differ in that they can be cultured outside the host, and we can therefore assess their ability to infect after treatment. The problem with surrogate viruses is that we do not understand if they have the same resistance to controls as pathogenic viruses.

There is no doubt that foodborne viruses are causing a far greater number of illnesses than the number we see in published statistics. It is clear that together with shellfish and fresh produce manufacturers, meat producers should also be starting to consider if and how viruses affect their products and considering what controls may need to be in place to limit contamination of final products in the future.

2 responses to “Viruses – An increasing hazard in meats?”