A wholesome approach to snacking

Chika Russell tells Beau Bailey about the memories that influenced her up-and-coming snack brand and how she’s catering to the demands of healthy eating. 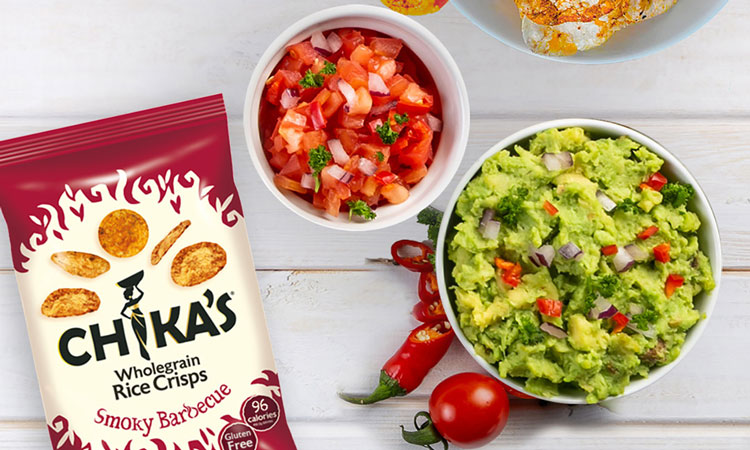 The rising demand for healthier food is continuing to impact the snacking sector. In fact, the global healthy snacks market is forecast to reach $32.2 billion by 2025.1 However, it’s worth acknowledging that modern consumers are far better informed about the food they consume and not as easily swayed by buzz words on packaging.

“Marketing is a powerful tool,” Chika Russell, the founder of Chika Foods, told New Food. “Take a packet of lentil crisps, for example; it sounds healthy but when you look at the ingredients list they may only contain 11 percent lentils.

“Some consumers are getting wise to these tactics. They’re beginning to understand what constitutes a healthy snack, and I hope, with time, we’ll see more of this.”

Respectful of today’s consumer, Russell’s snack business is centred around the idea of ‘wholesomeness’, not just in terms of the ingredients and processes used, but in the nostalgia and culture it represents.

Russell is British born, but identifies as “fully Nigerian”, having spent her childhood there.

“My parents wanted me to have an affinity with Nigeria and understand my heritage,” she explained.

The country has an innate love of food, she continued. “I’d spend my time climbing mango trees, picking plantains and collecting pineapples. You could pick at everything.”

Russell fondly recalls the smells and variety of street foods that were available within her gated street. “It was like having a restaurant on your doorstep,” she said. “At any point during the day, you could stop by Mama Put – that’s what we call them, it roughly translates to ‘mum who makes small portions ready for you to eat’ – and buy all this amazing food. For me, it was the best thing about living there.

“When it came to making meals, everyone would be given a task in the household – whether that was rice or tomatoes – and then we’d meet in a field nearby and create a makeshift barbeque in an old tin.”

Our authenticity is really linked to what we do with the ingredients – in other words, not overprocessing them.

This inherent connection to food fed Russell’s passion for cookery, which eventually led to the creation of her business.

“I was six when my parents said I’d be leaving Nigeria. They wanted me to have a formal education in London, and it hit me that not only would I be leaving my home, but my female friends wouldn’t be getting this opportunity. It would be their brothers who would be the ones who studied, and the girls would have to work in their mum’s Mama Put.”

Russell recalls her time in Nigeria fondly: “I can’t remember if there were bad times; all I remember is the fresh food being toasted – the taste, the smell, the happiness.”

Inspired not only by the feelings associated with her childhood memories, but also missing the “natural foods” that are enjoyed in Nigeria, Russell decided to launch a snacks company that would celebrate her heritage while catering to the health-conscious consumer.

Russell explained that the brand’s nod to its African roots mostly relates to the techniques employed to create the snacks. Of course she has been influenced by some of Nigeria’s popular flavour combinations, but, equally, she understands that the UK market has certain preferences for tastes.

“Fish powder is huge in West Africa, but I can’t create a snack with fish powder for the UK market because it’s just not going to be mainstream!” She laughed. “So, I have to blend and balance what I grew up eating and love with what the masses appreciate.”

Russell added that she has no hesitation including local (eg British) flavours in her range – and has done so – which already have an established market, for example salt and vinegar.

“In the UK, it’s very much about lots of flavour and new, exciting combinations. Whereas in Nigeria, we favour comparatively plain snacks: for example, we’d just take a fruit, such as a papaya, slice it, bake it and sprinkle on some salt and chilli.

“We are very much about appreciating the foods of the earth in the way nature intended. Our authenticity is really linked to what we do with the ingredients – in other words, not overprocessing them.”

Taking the brand’s rice crisp as an example, Russell explained that the core ingredients are brown rice (50-52 percent) and red lentils (25 percent). These ingredients are not supplied as flour as they may be with some other crisps, but rather combined in their natural form. The ingredients are placed into a machine which compresses and flattens it into a crisp shape. The result is a snack made from around 75-80 percent whole grains. 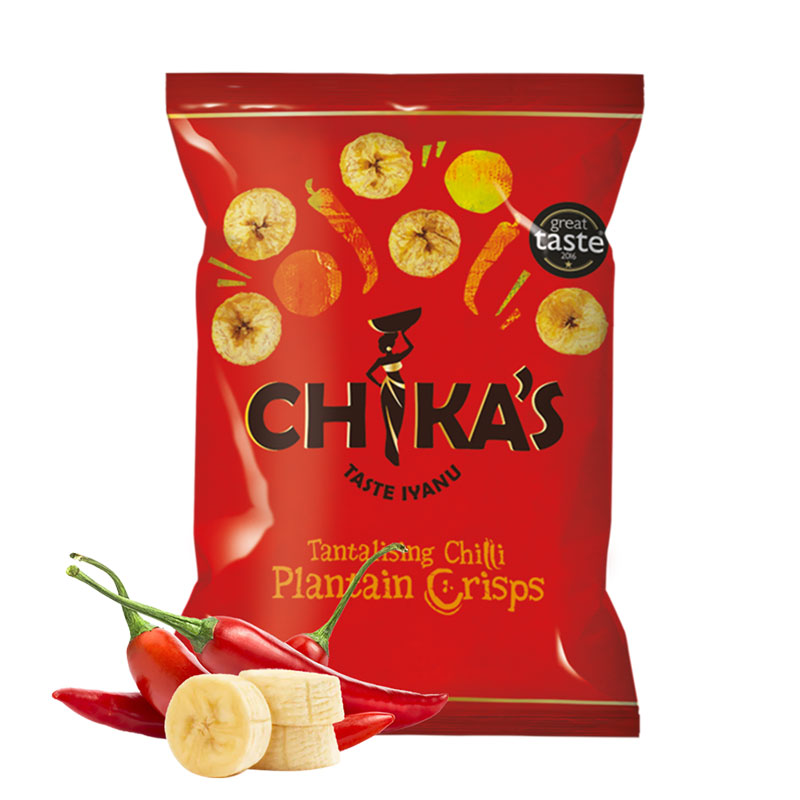 Similarly, the way in which Russell’s nuts are processed (she uses cashews, almonds and peanuts) is very modest. “We use whole nuts and remove the shell (husk) and the skin remains intact. We sprinkle salt and water onto the nuts and leave them to dry. The nuts are then placed into a large iron skillet; the key is to keep tossing them so they never touch the pan for long. These are then cooled on racks.

“Africans eat nuts without the skin, so when it’s finished being toasted, you have to peel off what we call ‘chaff’, whereas some Britons prefer to eat this. So when we launched Chika’s, it made sense to offer gastro pubs both options.”

She explained that the small scale of her operation, typically processing a ton of nuts at a time, allows the product to remain fresh. “The overprocessing comes when a company has too much stock; the older stuff becomes rancid and, in order to kill the bacteria, the nuts have to be bleached and then fried and salted to add colour and flavour back in.

“We stand for good ingredients, good ethos, and we back good causes,” Russell continued. She explained that this philosophy also helps the brand stand out in a competitive market. “It would have been much cheaper for us to only use blended lentils and blended flour and then to bulk it up with other starch, but that wouldn’t be staying true to our ethos. I’m not going to sacrifice our brand integrity for the sake of short-term gains.

“It was really hard in the beginning, but over the last two years, Chika’s has been growing much more quickly.”

Alongside celebrating Nigerian flavours, Chika’s also aims to help girls in West Africa gain an education. “From the age of 16, I sponsored my first child. I always said, ‘when I’m earning more money, I will sponsor more children’, but I didn’t want it to be dependent on how much I earned; I wanted it to be intrinsic with my daily life. So, for every bag of Chika’s bought, irrespective of what happens to the business, one penny will be donated to help girls in West Africa get an education. So far we’ve helped 500.”

The current and future snack market

Prior to the pandemic, Russell said there had been a convenience sector boom. “Consumers were looking for quick and easy products, but there was also a movement towards health, with people wanting their ready-to-eat meals to be good for them.”

The health trend was accelerated as COVID-19 took hold of the world, while the convenience market took a hit.

“I believe the convenience snacking category has changed permanently. As lockdowns were imposed, companies moved online and, in some instances, it’s worked in a brand’s favour. I think even as we start to see society open up again, people will remain online because it’s easier.”

Russell also pointed to the trend for brand integrity. “Consumers seek brands they trust,” she said, “but they also look for value for money. I think these will be trends we’ll continue to see for some time; at least until Covid becomes a thing of the past. Then, perhaps people will settle back into old habits.”

Chika is an international entrepreneur, mentor and speaker. After 10 years working in finance and banking and qualifying as a management accountant, she went on to launch Chika’s.
In 2015, Chika took part in BBC’s Dragons’ Den and gave what Deborah Meaden described as one of the best pitches ever. In July 2016, she launched a revolutionary snack subscription box in partnership with the charity SOS Children, with the bold aim of supporting thousands of African children through education.
Chika is passionate about educating women and is a partner to Worldvision in their Empowering Girls programme. She is a founding member of the Conduit Club, which works to develop and promote positive social impact. Chika has also represented female-led SMEs at 10 Downing Street’s Women in Business events.
In 2019, Chika was selected as one of the Top 30 Inspiring UK Entrepreneurs by Business Leader. She has also been recognised as a ‘Consumer Business Rising Star’ by the Black British Business Awards.