Robert Blood, Founder of SIGWATCH – the activist observation consultancy – suggests seven sustainability trends that food and beverage industry companies should be aware of if they are to retain and grow their customers. 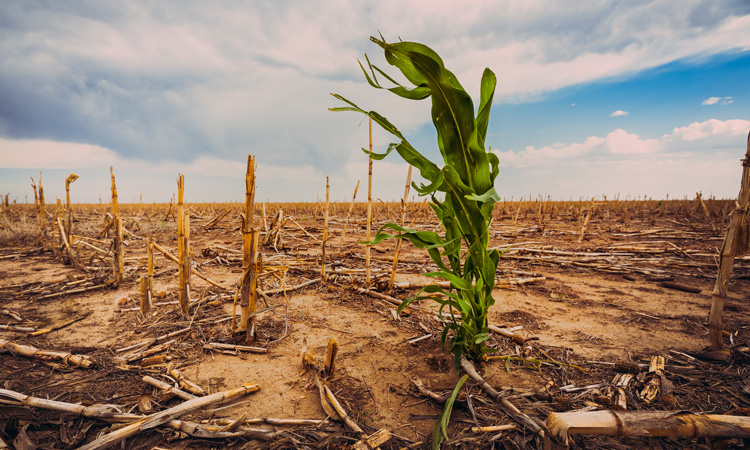 Forewarned is forearmed, goes the old saying. NGOs and activists unwittingly offer us a powerful early warning system for emerging issues because campaigning groups are classic early adopters of new causes and concerns. Whether triggered by freshly published science, a scandal in a multinational food industry supply chain, or the dawning awareness that a once tolerated practice may not be such a good idea after all, NGOs are almost always the first to tell the world and raise the alarm.

As a result, systematic and comprehensive tracking of their campaigning can help companies plan for future problems, such as fracking, palm oil, plastics, and climate change, months or years before media and political attention make decisive action unavoidable.

Following are seven trending issues from SIGWATCH’s monitoring of NGO campaigning that food industry companies need to be thinking about seriously if they are to avoid losing customers, suppliers or shareholders.

Coal is on the way out and the days of oil and gas are numbered. What will be the next target for carbon reduction? Energy-intensive sectors such as metal refining and construction, and tech (data centres consume huge amounts of power just for cooling) may get the headlines, but agriculture and food production are one of the biggest sources of carbon pollution, from soil carbon released during ploughing and fossil fuel inputs like fertilisers and pesticides to food waste when grains are lost through poor handling or processed food is thrown away uneaten by consumers. Food companies sitting at the top of the food chain are exposed to all these climate-exacerbating problems. Campaigners are making them directly or indirectly responsible. 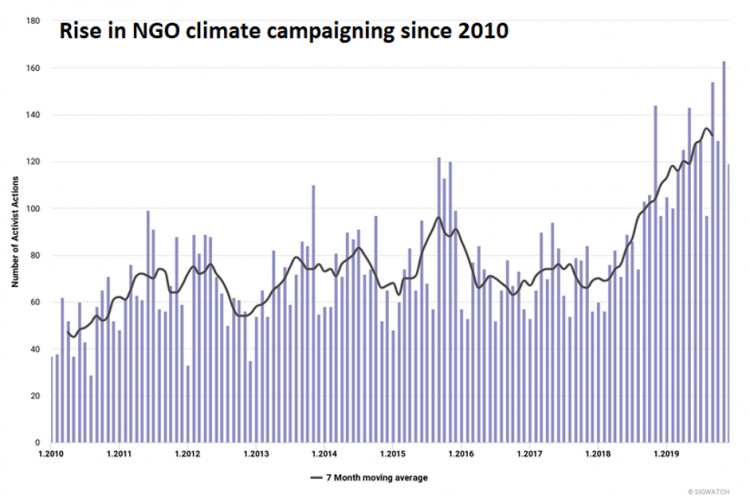 Last year’s fires destroying large areas of the Amazon rainforest, and the long running problem of palm oil plantations burning rainforest in Indonesia and Malaysia, brought home the intensity of agriculture-driven deforestation in a highly emotive way. Activists and commentators are increasingly calling into question the world’s commodity agricultural system, and with it, the rationality of large-scale crop cultivation. Food companies need to take a grip of their supply chains to avoid being tainted by association, or be caught off-guard by rivals posting negative labels such as ‘Deforestation-Free’ on their products to assuage consumer anxiety. 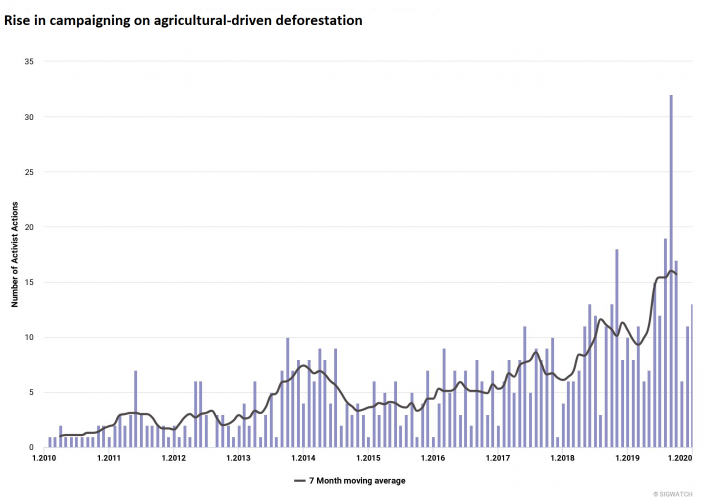 A trend we have seen come through strongly in the last five years is ‘green vegetarianism’: eschewing meat for the sake of the climate and environment, as opposed to the traditional justifications of health or ethics. Environmental and climate campaigners have been strongly pressing this dietary change as one of the most effective ways to reduce one’s carbon footprint. Wider availability of non-meat options in restaurants and office catering, and historically high interest in vegan lifestyles as revealed by a much-increased volume of Google searches on the topic, shows their arguments are making an impact. The consequences for any company selling meat-based products is obvious, but they also extend down the whole food chain to producers of animal feed and the large portion of agribusiness that is linked to industrial scale grain production. 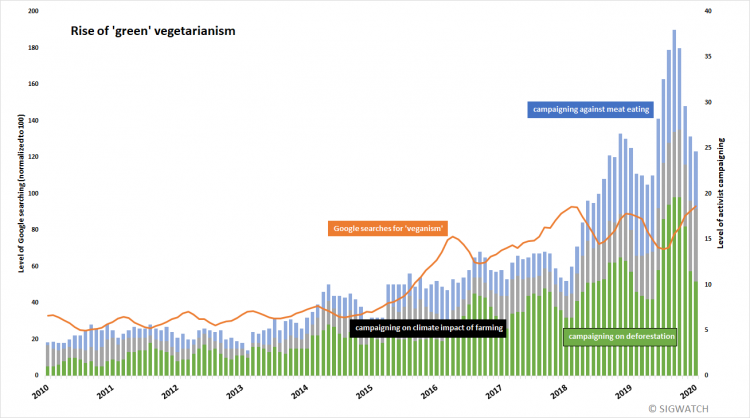 Environmental and climate campaigners have been strongly pressing this dietary change as one of the most effective ways to reduce one’s carbon footprint.

It is increasingly accepted, at least in Europe, that there has been a marked decline in insect abundance and biodiversity, born out both by scientific surveys but also people’s common experience of much reduced bug debris on car windscreens, and reduced numbers of certain insect-eating birds. The reasons are not clear, but most of the usual suspects – pesticide use, intensification of agriculture, loss of wilderness, and climate change – touch on agribusiness. We are already seeing campaigning groups use these findings as a smoking gun for modern agriculture’s damage to nature. It will surely not be long before the food industry and retailing, as the largest purchaser of agricultural outputs, and the easiest to blame by name, ends up in the firing line.

Water access and stress have been bubbling issues for environmentalists for some time, but we expect interest to increase as campaigners perceive high input agriculture as antithetical to climate change, especially in the developing world. This will put modern farming under pressure to reduce water waste along with other inputs. The food industry has a choice: to use its buying power and influence to change producers’ practices, or do nothing and suffer the consequences of declining availability of commodities and anger from drought-plagued populations.

Consumerism and abundance has led the West to carelessness about waste, so it becomes a shock for people today to realise that probably every square metre of the world is now contaminated with plastic (particles have been found at the top of mountains and in the pristine expanse of the Arctic). However, plastic guilt is only one expression of a widely felt concern over rampant consumption, and the realisation that everything we eat or use has perforce been made from materials of finite supply.

The food industry with its global supply chains that start in some of the most impoverished and politically challenged countries in the world is increasingly under scrutiny.

In Europe, campaigners and some politicians have responded with a vision of a ‘circular economy’ with ‘zero waste’: maximum recovery and re-use of products, designing out waste and ensuring unnecessary replacement. This is already in the process of being turned into legislation by the European Commission. In such an environment, where will food companies fit, and how will they be regulated to conform to the ideals of a zero waste, fully circular economy?

One of the most striking trends in finance in the last five years is the rise in importance of environmental and social governance (ESG). Once the preserve of niche socially responsible investing, ESG considerations are now applied as standard practice for excluding or down-weighting investments by mainstream investment funds. ESG criteria have also become more widely applied. Once used just to exclude ‘sin stocks’ such as arms, alcohol and gambling, today ESG encompasses a wide range of environmental and social issues from climate to human rights, animal welfare to Indigenous peoples and executive pay. The food industry with its global supply chains that start in some of the most impoverished and politically challenged countries in the world is increasingly under scrutiny. In the Netherlands for example, banks are already under pressure to stop financing large scale livestock production. How many food companies can survive wholesale loss of professional capital? 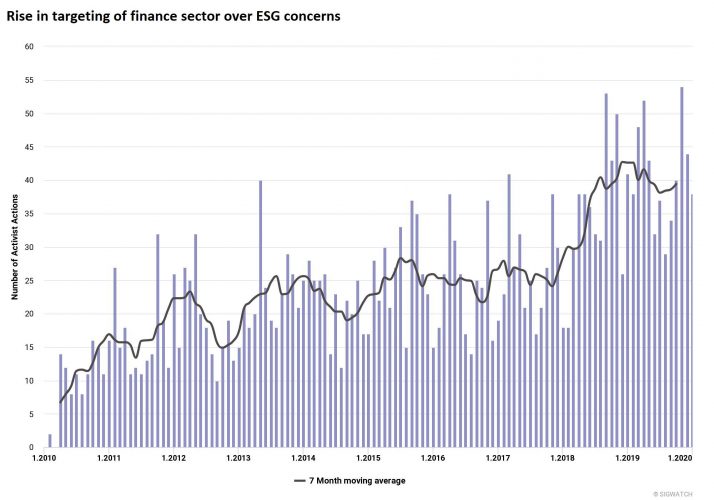 Robert Blood is the Managing Director of SIGWATCH, a global research and strategy consultancy that tracks the campaigning of over ten thousand activist groups around the world to identify emerging issues and quantify corporate impacts. He founded the company in 1997 after a fifteen-year career in reputation management at public relations consultancies Fleishman-Hillard and the Quentin Bell Organisation.

Today SIGWATCH works with many of the world’s leading multinationals from most industry sectors. Financial institutions comprise a third of its clients. Robert is a member of the Editorial Board of the Journal of Communications Management. He has a degree in physics from Durham University. 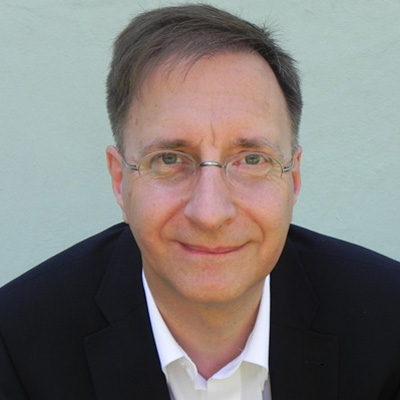