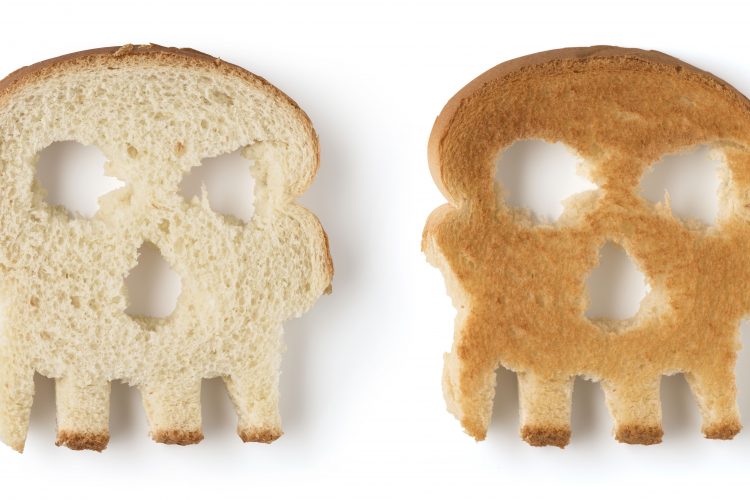 My friend – and now colleague, Sally Black, discovered that her daughter was a Coeliac when she was a toddler. My own family had all sorts of intolerances, one of which was gluten. It was this that first sparked our friendship, which would eventually lead to the inception of  Oast to host in 2011.

I trained as a confectioner, making celebration cakes; and soon became interested in why so many people were becoming intolerant to everyday foods on the market. The real catalyst was when I responded to an advert in a local magazine for someone to make puddings for a farmer’s market and after some deliberation, I decided it was worth a try. The excitement for this new venture was infectious and it wasn’t long before Sally also volunteered to “throw a pudding or two on the table” too.

Cross contamination is a big concern when baking for people with allergies.

Sally was also rather handy in the kitchen after completing her formal training in cookery at Eastbourne college after leaving school. We were determined to provide a range of puddings to accommodate all dietary requirements, so we set up a ‘dot system’ on the stall for people looking for suitable foods. Green dots meant that the product was dairy free, and orange meant it was gluten free. Both dots meant it was both gluten and dairy free. We started with a few products in these ranges, but soon noticed that the table had got full blown ‘measles’ as the demand was rising!

It wasn’t too long before local farmshops and cafes were getting in touch to ask to stock some of Oast to hosts’ gluten and dairy free range.

Historically, gluten free products have been pale, unreliable, difficult to use, gritty and sometimes really quite unpalatable. Sally and I were on a mission to create tasty dishes for everyone to enjoy. We spent a lot of time thinking hard about the different flours and what they brought to the table. Many people had been working on bread, but when we started Oast to host, not many companies had taken on the pastry challenge. As we made puddings to sell at the market, it made sense for us to specialise in pies and tarts as they were easier for customers to carry home. 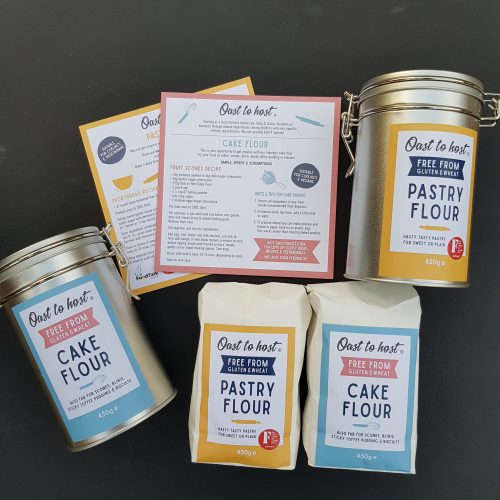 We have had our share of challenges; we have been very discerning over the quality and texture of the final-end product, working to ensure quality and consistency. One of the major obstacles was getting the colour right. Pastry products should not look anaemic; we had to find the right blend of different flours to create a product that could actually crisp and brown up in the oven.

The taste was next on the list of challenges. A lot of would-be cooks have given up trying to make pastry products as it is difficult to make and can be disappointing to eat once served. In the past, anyone who didn’t need to eat gluten free foods would not consider touching food for Coeliacs, but this is really changing. Not only are more people eating a gluten-free diet, but the flavour and texture profile (certainly in our case) has been brought in line with what consumers have come to expect.

The final challenge with gluten-free pastry is its workability. Pastry should allow a cook to roll out the pastry to a very thin layer, particularly if rolled on cornflour or potato starch. It should also be able to stretch and cover large surfaces with little risk of tears and breaks.

Pastry should work well with machinery in factory environments too. At present, our pastry is regularly used in a pastry press and has been tested successfully through a roller. As there is no gluten, there is no need to rest the pastry. Once the dough – which can be made in small or large batches – comes away from the side of the bowl it is ready to roll.

Cross contamination is a big concern when baking for people with allergies. When we built our kitchen, we decided that we would never allow any gluten containing products to cross the threshold. This includes oats which has a similar protein to gluten called avenin and can cause a comparable reaction to a Coeliac. One of our customers, for example develops flu-like symptoms when she has gluten, even in fractional amounts. She and another of our customers have to carry epi-pens just in case. It is a serious issue and underlines the importance of our approach. A whole holiday can be ruined by a careless action.

It is estimated that one in 100 people may have Coeliac disease but only 30 percent of them have been diagnosed.

Oast to hosts’ flour is blended in a gluten free factory and is spot-checked at a laboratory to confirm that there is no contamination. When we started packaging, we bagged our blends into small units suitable for baking one tart at a time. This was aimed mainly at the chalet catering staff, where perhaps a few less-aware people would be baking for their guests.

We are keen to show people that cooking for a gluten-free diet is simple, speedy and is often better than the non-gluten free alternative.

It is estimated that one in 100 people may have Coeliac disease but only 30 percent of them have been diagnosed. We continue to see the gluten-free market grow as more people are being diagnosed with Coeliac disease, due to both better awareness and more available tests. The products on the market have improved considerably and because of this, people are choosing it as a lifestyle choice as well as because of allergy restrictions. There have been big strides in cleaning up the food industry and more pre-prepared foods such as sausages are being made consistently without gluten.

We are keen to show people that cooking for a gluten-free diet is simple, speedy and (in our opinion) often better than the non-gluten-free alternative. We want to re-establish confidence in the kitchen, where cooks are often worried about adopting a gluten-free diet. It really is an opportunity to cook healthy, simple, tasty dishes that everyone will enjoy. 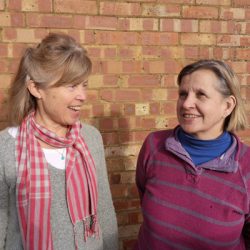 Oast to host is a gluten- and wheat-free bakery based in Kent, UK. Best friends Sally Black and Claire Forster founded the business in 2011 through their shared experiences raising children with very specific dietary requirements.

Their mission is to allow new and existing customers (retail and food service) easy access to simple, honest products.