The research showed shocking levels of sugar, with branded products often having a higher sugar content than supermarket brands… 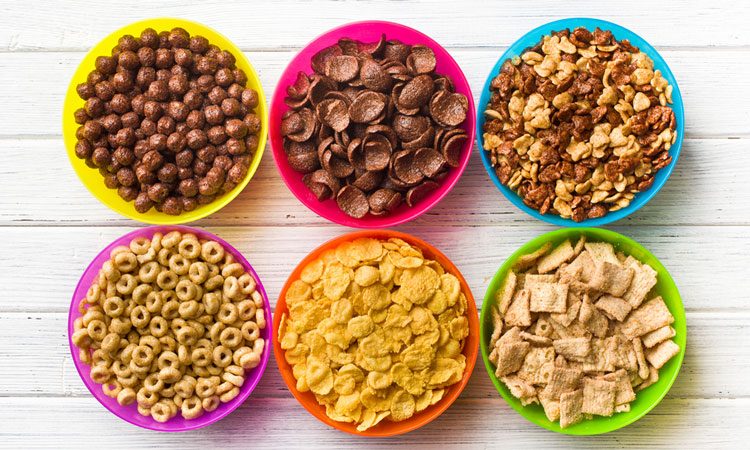 With the ongoing obesity crisis, introduction of the sugar tax, and in the wake of Public Health England’s report on the progress achieved in the first year of sugar reduction targets by manufacturers, comes a survey showing that half of 99 cereals tested still contain above the limit of 50 per cent of a child’s recommended daily sugar intake per serving.

The modest serving of 30g cereal with 125ml semi-skimmed milk is one that many often overlook, and as such, in most cases where cereal is not weighed, or where whole milk (or even nut- or plant-based milk) is used, actual sugar consumption is much higher.

The research by showed the high amounts of sugar still to be found in commonly-consumed cereals, with branded products often having a higher sugar content than supermarket brands.

Kellogg’s Frosties had the highest sugar content with 4.26 teaspoons of sugar per 30g bowl – the equivalent of almost half a can of Coca Cola, with Sainsbury’s own brand of frosted flakes using up 68.7 per cent of a child’s daily sugar intake. This is equivalent to 4.05 teaspoons, or three KitKats’ worth of sugar in every 30g bowl.

Despite the supermarket brand being the option with less sugar, it was still over the recommended limit.

The new formula of popular cereal Kellogg’s Coco Pops was said to contain 46.25 per cent of a child’s daily recommended intake, per 30g serving. That was despite the fact that the sugar content in the cereal had been reduced by 30 per cent from the original formula.

At the bottom of the list came the ‘healthier’ options for cereal. The cereals with the least sugar were found to be wheat biscuit cereals, such as Weetabix, or cornflake-type cereals. Supermarket branded cornflake cereals contained less sugar than the Kellogg’s version, with Sainsbury’s whole wheat biscuits having 9.7 per cent less sugar that the branded version.

The report mentioned that to cut down on sugar, whole wheat biscuits are currently the best option, with Morrisons Puffed Wheat having the lowest percentage of sugar for a 30g serving.

Salt and fat content could also be analysed so individuals can make informed decisions about  the cereals they buy – especially for young children.