In the past decades, large areas of forest in Sumatra, Indonesia have been cut down to make room for crops like oil palm and rubber. Now research suggests the this change in the Southeast Asia region’s temperature. 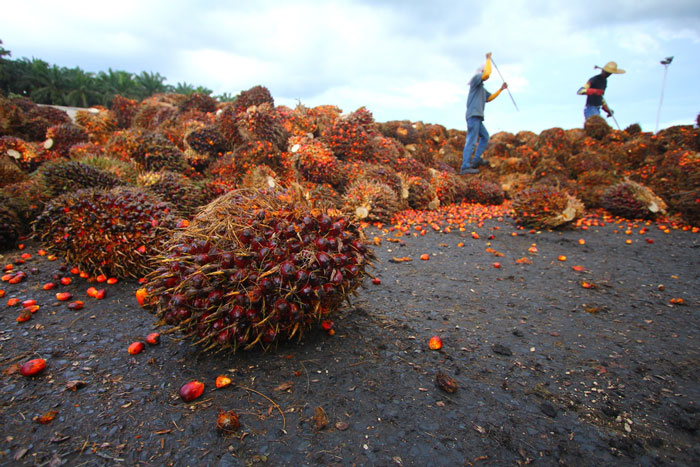 Palm oil is the most widely used vegetable oil in the world, appearing in the ingredients’ list of many consumer goods, from chocolate to soap.

Indonesia, the world’s largest producer of palm oil, has seen large swathes of rainforest cleared away and replaced by oil palm plantations at rates that exceed those of Brazil.

On the island of Sumatra, which has had the highest loss of native rainforest in all of Indonesia, the changes in land use have meant a substantial loss of animal and plant diversity. However, the impact of these changes on the region’s temperatures had not been studied until now.

An international team of researchers, led by Clifton Sabajo and Alexander Knohl from the University of Göttingen in Germany, have published a new study in the European Geosciences Union journal Biogeosciences showing that the expansion of oil palm and other cash crops in Sumatra has made the region warmer.

“Land use change from forest to cash crops such as oil palm and rubber plantations does not only impact biodiversity and stored carbon, but also has a surface warming effect, adding to climate change,” said Knohl, a Professor in Bioclimatology.

The team studied differences in surface temperature for various types of land cover, such as forests, clear-cut land, and cash crops, in the Jambi province of Sumatra. They used satellite data collected between 2000 and 2015 by the NASA Landsat missions and the MODIS instrument, as well as data collected on the ground.

They found that clear-cut land, which is mainly used for agriculture, was up to 10 °C warmer than forests.

“Clear-cut land is the phase between forest and other land cover types, such as small-holders (small-scale family farms) or commercial plantations,” said Sabajo, a PhD student and the lead author of the Biogeosciences study. “From field observations, we know that the landscape is so dynamic that there are continuous land use changes all the time, so clear-cut land is always present.”

Mature palm oil plantations, which are older than 5 years, have a closed canopy and larger and more abundant leaves, which results in a cooler ground compared to a young plantation.

Sabajo said surface temperatures in forests are lower than in palm oil plantations and clear-cut land mainly because of “evaporative cooling”, which is similar to the process that cools us down when we sweat. There’s more evaporation and transpiration of water from plants and the soil into the atmosphere in a forest than in clear-cut land or a young oil-palm plantation, meaning the ground is cooler for that type of land cover.

Overall, the average mid-morning surface temperature in the Jambi province increased by 1.05 °C between 2000 and 2015. Some of this warming is a result of climate change, but some is a direct consequence of the changes in land use.

“We compared the average land-surface temperature increase in the province with a site that was covered by forest over the entire period and that can be considered as a control, unaffected by direct land-use change. The land-surface temperature of the forest sites (at 10:30am) only increased by 0.45 °C, suggesting that at least 0.6 °C of the 1.05 °C increase is due to land-use change,” said Knohl.

“The strong warming effect we show for the Jambi province may serve as an indication of future changes in land-surface temperature for other regions of Indonesia that will undergo land transformations towards oil palm plantations,” the scientists write in the study.

The Indonesian government plans to substantially expand the country’s production of oil palm, as the demand for this product increases around the world.

What this additional increase in temperature means for the region is yet unclear, but Knohl notes that “land surface temperature is an important part of the microclimate, which shapes habitat conditions for plants and animals.”

In the study, they write that the observed warming may affect ecosystems, reduce how much water is available in the region over the dry season, as well as make the area more vulnerable to wildfires.

“We think that current land-use developments in Indonesia need to carefully evaluate all aspects of environmental and socio-economic consequences. Land-surface temperature and microclimate should be considered,” said Knohl.