A report from the Red Meat Advisory Council Ltd has put Australia as the world’s biggest red meat exporter. 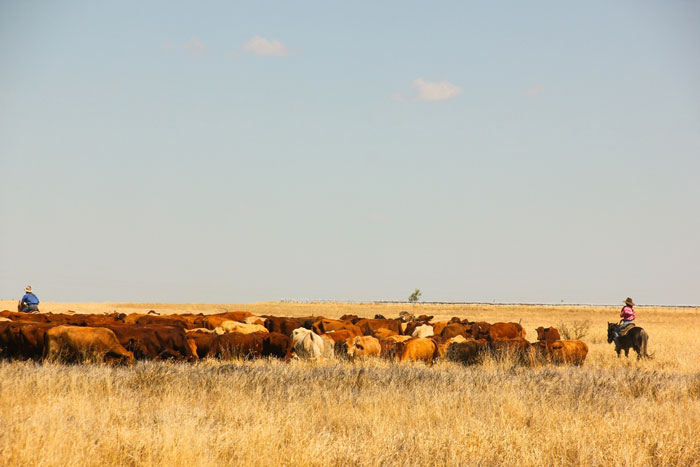 WHY DO THEY CALL HIM THE DROVER?: Australian's eat four times more beef than the global average.

It will hardly be surprising for many to discover that in Australia, red meat is big business. The images of ranches so vast they require helicopters to traverse and herds more populace than a small town are deeply associated with the economy and iconography of the nation.

A new report, the first produced the Australian Red Meat Advisory Council (RMAC), has set out to quantify and understand just how much red meat means to the country’s economy and population.

State of the Industry 2017 puts Australia as the world’s largest exporter of beef and the second largest exporter of sheep meat, after New Zealand, as of 2015. These figures are in spite of a 6 per cent drop in herd size between 2014 and 2015, and their national flock reaching a record low of 70.9 million.

Goat meat is on the up. Australia is the largest exporter of the food stuff, catering to 92.5 per cent of the USA’s supply needs, the world’s biggest importers. This once-niche industry is the fastest grower and Australia is reaping the benefits of a price increase of more than 177 per cent, exporting over 27,000 tonnes of goat meat last year.

The amount of cash generated from the red meat industry is going up in leaps and bounds. Export value increased by almost AUS $6 billion over the past five years from $9.2 billion to $15.1 billion.

RMAC Independent Chairman, Don Mackay, said the State of the Industry 2017 demonstrates for the first time the key part red meat plays in the Australian economic success story, from our plates, to our jobs and our businesses.

“No industry has a more important place in society than an industry that feeds its people and sustains and improves their way of life.”

“We have achieved turnover growth of 11 per cent, contributed $18 billion to Australian GDP, sustain 405,000 direct and indirect jobs and feed 24 million Australians day in and day out,” Mr Mackay said.

“Our industry continues to work for our rural and regional jobs, accounting for almost a quarter of agrifood jobs in Australia.

“We’ve seen recent examples of the Australian red meat industry being damaged by attacks from crusading politicians who are more interested in making a name for themselves than protecting Australian jobs.

“The reality is despite an incredibly challenging environment out there, we’ve seen a five per cent growth in businesses across the chain, there are more processing businesses now than four years ago and we’ve seen a 48 per cent rise in saleyard prices.”

“We know the key, tangible outcomes that government can deliver that help us be a bigger and better red meat nation for businesses and workers alike.”

According to Mr Mackay getting trade and infrastructure right is critical in order to become an attractive place for global and Australian investors into the industry.

“To attract much needed capital investment into our market we need urgent reform into our policy settings. We must tactically reduce our 3-billion-dollar technical trade barrier bill, optimise our supply chains which will add $750 million and up to 4, 000 jobs to our bottom line and make all agricultural policy with a commercial and agribusiness focus.”

Glenn Carmody, Consumer and Industrial Products Market Segment Leader, EY said that the report demonstrates the significance of the industry within the Australian economy.

“The red meat and livestock industry is a key contributor to the nation’s employment, noting a large number of jobs are in rural and regional areas.”

Mr Carmody highlighted the strong performance of the industry in recent years, with increases in turnover, value add and employment and high livestock prices.

“The most recent data in relation to goat meat shows that in 2013, Australia was the largest goat meat exporter.”