Colorimetric recognition of aldehydes and ketones in scotch

New colorimetric sensor arrays on disposable test-strips read by hand-held devices allow for their rapid, inexpensive, and sensitive identification by their chemical “fingerprints”. They are based on novel sensor arrays that detect and differentiate among a diverse range of aldehydes and ketones, as reported in the journal Angewandte Chemie. 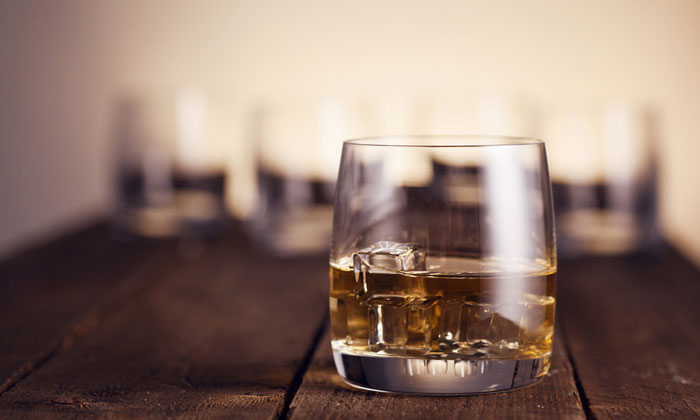 Vodka tastes different from brandy, and connoisseurs can distinguish among different brands of whiskeys. The flavours of spirits result from a complex bouquet of volatile compounds.

Many volatile compounds can now be detected quite well by “electronic noses” that were inspired by the olfactory receptors of animals and provide characteristic chemical fingerprints for scents and mixtures of scents. Because the binding of scent molecules must be reversible for the nose to be reusable, only weakly binding chemical receptors can be used, which limits sensitivity and selectivity. As an alternative, a team working with Kenneth S. Suslick has developed inexpensive, colorimetric, disposable test strips based on strong interactions between the sensors and the analyte molecules. Unlike electronic noses, a variety of chemically reactive dyes are arranged into a sensor array and are simply printed like “chemical ink”. Different analyte molecules bind to the individual reagent areas with different degrees of strength, causing the reagents to change color. The result is a characteristic pattern of color changes that can be detected and analysed by common pattern recognition techniques with a hand-held device.

Inspired by classic spot tests used to indicate the presence of aldehydes and ketones through color changes in aniline and phenylhydrazine dyes, the researchers from the University of Illinois at Urbana-Champaign (USA) expanded the repertoire of their colorimetric sensor arrays. The new array was able to detect and differentiate numerous different aldehydes and ketones at concentrations below 0.0001%.

This type of sensitive, fast, and inexpensive method for detecting volatile aldehydes and ketones is of use in many fields: from the detection of chemical toxins like formaldehyde, to safety and food inspections, and preventative screening. For example, detection of acetone and acetoacetate could indicate dangerous ketosis in diabetics. Substances like vanillin, diacetyl, and furfural, which are produced in the fermentation and ageing of beers and spirits, contribute significantly to their flavors.

To highlight potential applications for quality control in the food and beverage industries, the researchers developed a sensor array for spirits. It includes indicators for aldehydes and ketones as well as a number of other classes of substance such as carboxylic acids, sulfides, amines, and polyphenols, registering a broader palette of the aromatic compounds that make up the specific flavors of spirits. For the sophisticated consumer, this complex mixture, the bouquet, has to be just right to guarantee the quality of the beverage. It was possible to unequivocally distinguish whiskies from brandy or vodka and even among different brands of whiskeys, bourbons, and scotches.