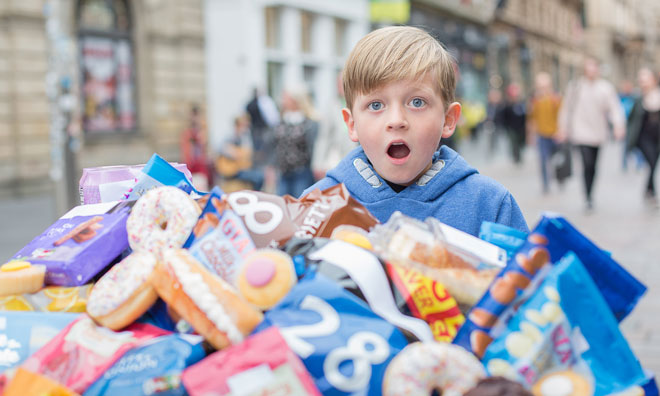 Food Standards Scotland (FSS) has launched a thought-provoking healthy eating campaign aimed at encouraging people in Scotland to reduce obesity and  the number of unhealthy snacks we eat. The campaign addresses the country’s diet-related poor health and obesity record by drawing attention to the uncomfortable truth that people in Scotland are potentially damaging their future health by over-indulging and “treating” themselves and their children too often with unhealthy and unnecessary snacks.

An FSS survey shows that the average child in Scotland aged between four and 10 years old consumes an average of around 24.5 kg of unhealthy, unnecessary snacks each year which equates to over 110,000 calories. In addition, the average intake of sugary drinks is around 145 cans or 48 litres per year, which is equivalent to 4.6 kg of sugar or 19,400 calories. Over the year an average seven year old child eats more than their body weight (23 kg) in unhealthy snacks alone and consumption of unhealthy snacks and drinks equates to around a quarter (129,749 kcal) of their yearly calorie requirement.

FSS’s recent report highlights that people in Scotland get half of their total sugar intake and one-fifth of all calories from unhealthy snacks and treats, such as cakes, biscuits, chocolate, sugary drinks and sweets which have little, if any, nutritional value.

Ross Finnie, FSS Chair said: “Scotland’s poor health and obesity record cannot continue on its current path. Many people in Scotland think they have a healthy diet, however a significant number of people either forget or are simply in denial about the amount of calories they consume via unhealthy snacks.

“Too many treats and habitual unhealthy snacking soon add up and can have a long-term detrimental impact on an individual’s health. This campaign will encourage consumers in Scotland to make small changes every day to protect theirs, and their children’s health in years to come.”

“It’s an uncomfortable truth that the amounts of “treats” and unhealthy snacks we are feeding ourselves and our children could impact our long-term health.

“Our healthy eating campaign may not be the easiest to digest for some because it’s designed to hit home but we believe it, combined with our package of recommendations to Scottish Ministers will go some way in addressing Scotland’s deep-rooted diet related issues.”

The campaign encourages people to drop unhealthy snacks or swap them for healthier alternatives and share their top tips for avoiding bad snacking habits on the FSS Facebook page.

The campaign is one strand of FSS’s five-year strategic plan, published last month, in which improving the nation’s diet and health is a major focus.