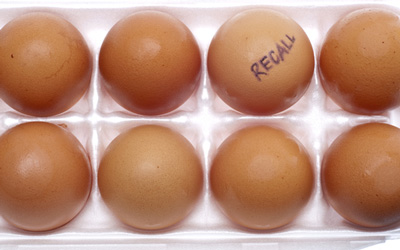 The Food Standards Agency (FSA) has published a summary of food incidents handled in the last quarter of 2015. The list summarises alerts issued by the FSA to recall or withdraw products. It also includes information about where the FSA supported foodborne outbreak investigations.

Over the three month period, 38 food notices were issued, of which 26 were allergy alerts, with the top three undeclared allergens being cereals, milk and mustard. The FSA also supported three foodborne outbreak investigations.

The information published in the list describes the overall details of the incident, the level of risk to consumers and what action was taken.

The FSA says it has collated this data to make it easier for consumers to access incident information.

Commenting on the publication of the list, Will Creswell, Head of Consumer Protection, said: “We hope this will prove to be a useful tool for people who want to know more about the incidents we handle. It’s a retrospective look, so these aren’t live incidents, but the list will give all the important aspects of food incidents in one place. This is the first quarterly publication with the next quarter covering January to March of this year to be published in May 2016.”

Each year, a small number of food incidents or investigations are put forward for a detailed review so that the FSA can make improvements and identify lessons learned.

Review on soya in wheat flour

The FSA has also published a review of an investigation handled in September 2014 where there were reports of the presence of soya in wheat flour. Although the risk relating to the incident was found to be low, the FSA took the incident seriously and it was escalated to a level such that it was overseen by the FSA Executive. The reason for this approach was because flour is contained in many food products and any consequences could have been far reaching for people who are allergic to soya. This review involved meeting with relevant stakeholders which led to a number of recommendations to assist industry and regulators and prevent similar issues recurring.

You can read the review here.